Robin Gelburd, JD
Robin Gelburd, JD, is the president of FAIR Health, a national, independent, nonprofit organization with the mission of bringing transparency to healthcare costs and health insurance information. FAIR Health possesses the nation’s largest collection of private healthcare claims data, which includes over 28 billion claim records contributed by payers and administrators who insure or process claims for private insurance plans covering more than 150 million individuals. CMS as a national Qualified Entity, FAIR Health also receives data representing the experience of all individuals enrolled in traditional Medicare Parts A, B and D; FAIR Health houses data on Medicare Advantage enrollees in its private claims data repository. Gelburd is a nationally recognized expert on healthcare policy, data and transparency.
In a sign of how important alternative places of service have become to the healthcare system, private insurance claim lines for services rendered in urgent care centers grew 1725% from 2007 to 2016—a growth rate more than 7 times that of emergency department (ED) claim lines (229%) in the same period.

This finding emerged when we examined alternative places of service in our FH Healthcare Indicators™, 1 of 2 reports unveiled in a recent white paper. (The other was the FH Medical Price Index™, which reports changes in medical prices over 5 years in 6 procedure categories.) Both reports were based on FAIR Health’s database of over $25 billion privately billed healthcare claims—the largest such repository in the country. The claims records are contributed by over 60 payers and administrators who insure or process claims for private insurance plans covering more than 150 million individuals.

Along with urgent care centers, we studied retail clinics, telehealth, and ambulatory surgery centers (ASCs)—all settings where people are increasingly seeking healthcare in preference to traditional places of service. The growth of such alternatives does not necessarily come at the cost of traditional settings. Indeed, hospitals and healthcare systems have increasingly been acquiring urgent care centers. This January, for example, the Louisiana-based Ochsner Health System added 2 more units, in downtown New Orleans, to its network of urgent care centers. “Urgent care is more accessible for our patients and has created a relief valve for the entire system and for the emergency room specifically,” Granville Morse, MD, the system chair for Ochsner Urgent Care, told The Times Picayune.

Knowledge of trends and patterns related to alternative places of service can be useful not only to healthcare systems but to payers, government officials, policy makers, and other healthcare stakeholders. Our results—on utilization, demographics, geographic characteristics, diagnoses, procedures and costs—bring a new level of clarity to an important part of the changing healthcare landscape.

Because they offer convenient hours and do not require an appointment, retail clinics and urgent care centers are often lumped together as “convenient care.” And, it is true that retail clinics, like urgent care centers, have been growing rapidly: From 2011 to 2016, claim lines for retail clinics increased by 847%. But, the 2 places of service are generally regarded as differing in the severity of the conditions they treat. Retail clinics are expected to treat a limited range of minor acute conditions with clear clinical guidelines, such as allergies, ear infections, and sunburn. Urgent care centers, which are usually equipped with their own labs and X-ray machines, can treat more serious acute conditions, including sprains, broken bones, and cuts requiring stitches.

It was only beyond those 2 categories that there were marked differences, reflecting the more serious conditions urgent care centers are equipped to treat. At urgent care centers—but not at retail clinics—the most common diagnostic categories included injuries; joint and soft tissue issues; digestive system issues; skin infections; sprains, strains and fractures; influenza/pneumonia; and diseases of the respiratory tract. 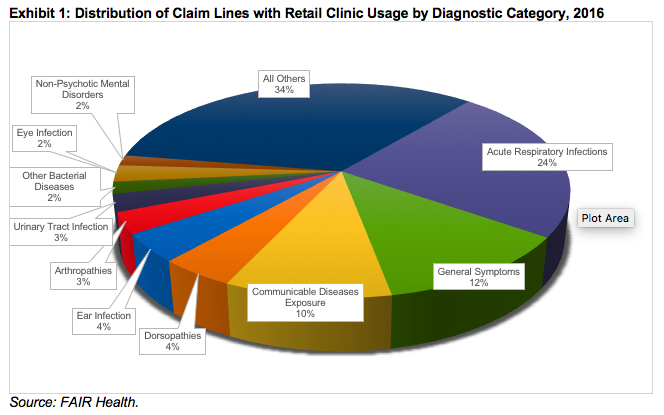 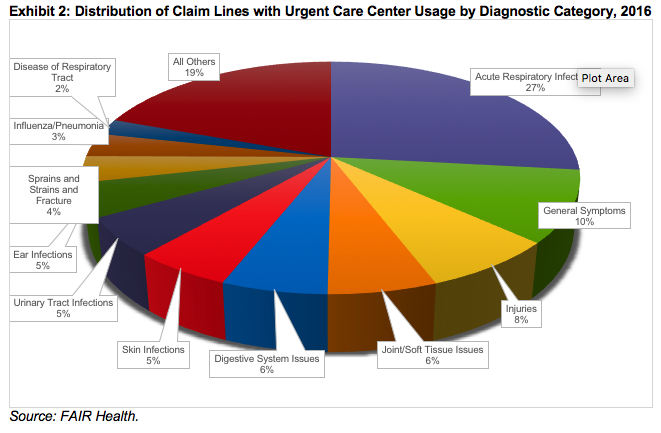 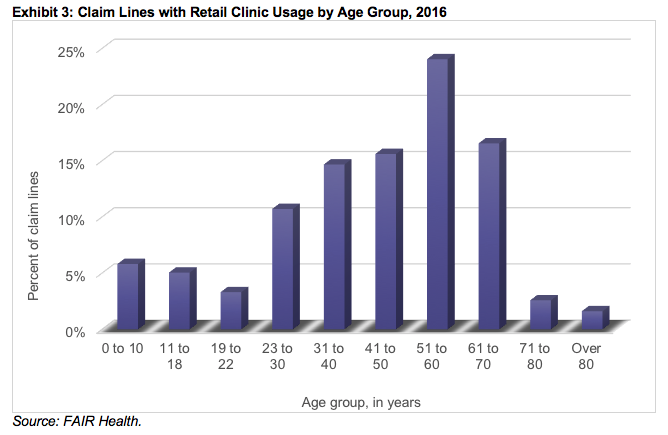 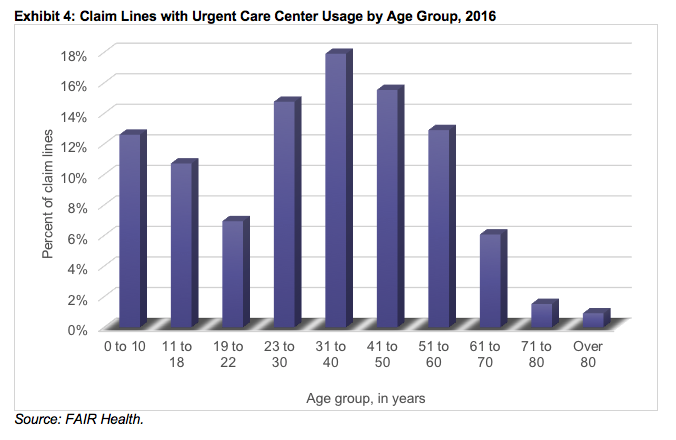 Retail clinics and urgent care centers differ somewhat in their most common procedures, in keeping with the differences in their most common diagnoses. For example, in 2016, surgery of arteries and veins was one of the most common procedures in urgent care centers, but not in retail clinics. This can make it difficult to compare prices between settings, since a more complex procedure can be expected to be more expensive than a simple one.

For a head-on comparison, we analyzed billed charges for the same procedures: new patient evaluation and management (E&M) visits, which typically include a detailed history and examination and medical decision making. The visits are coded by length of time: CPT® 99202 is 20 minutes, CPT 99203 is 30, CPT 99204 is 45 and CPT 99205 is 60.

When the same comparisons were made on the basis of median allowed amounts—the estimated amounts insurers negotiate with their network providers—the results were similar except for one code: CPT 99202. For that code, with respect to median allowed amounts, urgent care centers were the most expensive setting. The procedure was reimbursed $111 in an urgent care center, $93 in an office, and $74 in a retail clinic. 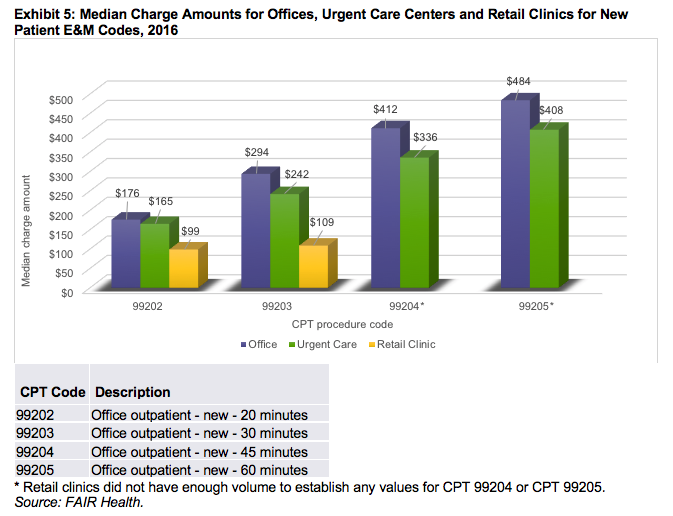 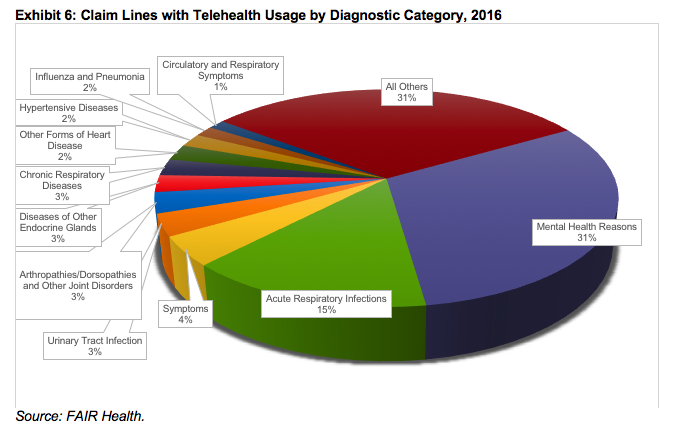 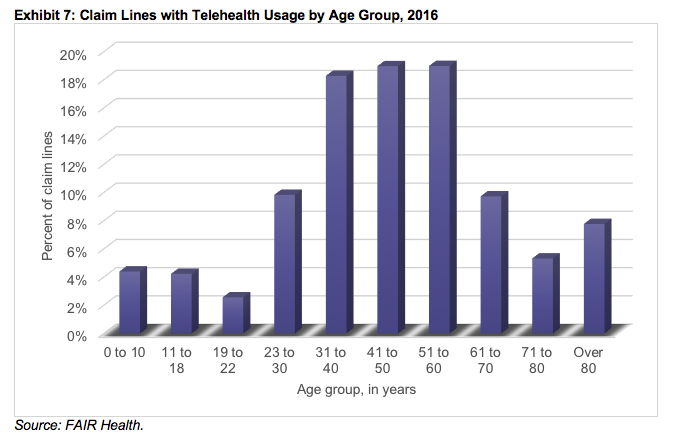 ASCs
Utilization of ASCs, which specialize in same-day surgical care, grew in recent years, but more slowly than that of the other alternative places of service we studied. From 2007 to 2016, claim lines with ASC usage increased nationally by 97%. The increase was greater in rural areas (127%) than urban settings (95%).

In one respect, ASCs were similar to all the other alternative places of service we studied, as well as to EDs. In every adult age group (ages 19 to 80 years and above), more claim lines for ASCs were submitted for females than males (Exhibit 8). Only in the age span 0 to 18 years were more claim lines submitted for males than females. The same was true in EDs. In retail clinics, urgent care centers and telehealth, females predominated in the age group 11 to 18 years as well as all adult age groups. These results were consistent with the findings of other researchers that females are more likely than males to seek healthcare. 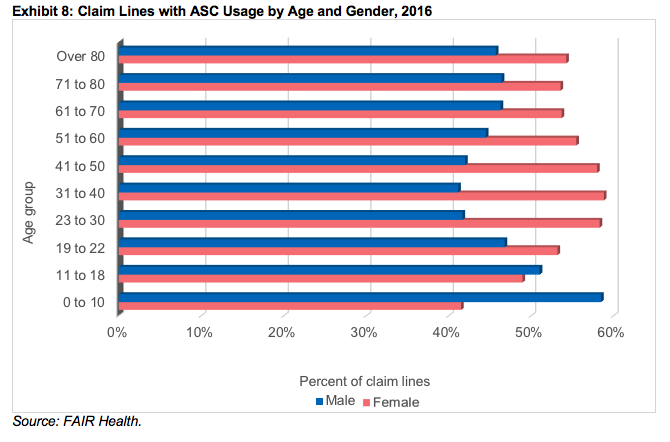 We hope our research on alternative places of service will prove useful to healthcare stakeholders and encourage further research. These rapidly evolving changes in the healthcare landscape bear watching.