Robin Gelburd, JD, is the president of FAIR Health, a national, independent, nonprofit organization with the mission of bringing transparency to healthcare costs and health insurance information. FAIR Health possesses the nation’s largest collection of private healthcare claims data, which includes over 28 billion claim records contributed by payers and administrators who insure or process claims for private insurance plans covering more than 150 million individuals. CMS as a national Qualified Entity, FAIR Health also receives data representing the experience of all individuals enrolled in traditional Medicare Parts A, B and D; FAIR Health houses data on Medicare Advantage enrollees in its private claims data repository. Gelburd is a nationally recognized expert on healthcare policy, data and transparency.
Private insurance claim lines for sexually transmitted diseases (STDs) rose 76% nationally from 2007 to 2018, according to a new study of STDs from FAIR Health, a national, independent nonprofit organization dedicated to bringing transparency to healthcare costs and health insurance information. The study results, which are being released in the form of an infographic, are based on analysis of data from FAIR Health’s comprehensive repository of over 30 billion private healthcare claim records—the largest in the country.

According to the Centers for Disease Control and Prevention (CDC), combined cases of syphilis, gonorrhea and chlamydia, the three most commonly reported STDs, reached an all-time high in the United States in 2018. FAIR Health’s findings shed new light on this growing public health issue.

Among the results of the FAIR Health study:

Claim lines with STD diagnoses, as a percentage of all medical claim lines, increased nationally 76 percent from 2007 to 2018, but the increase was even greater in rural areas—98%, compared to 77% in urban areas (FIGURE 1). 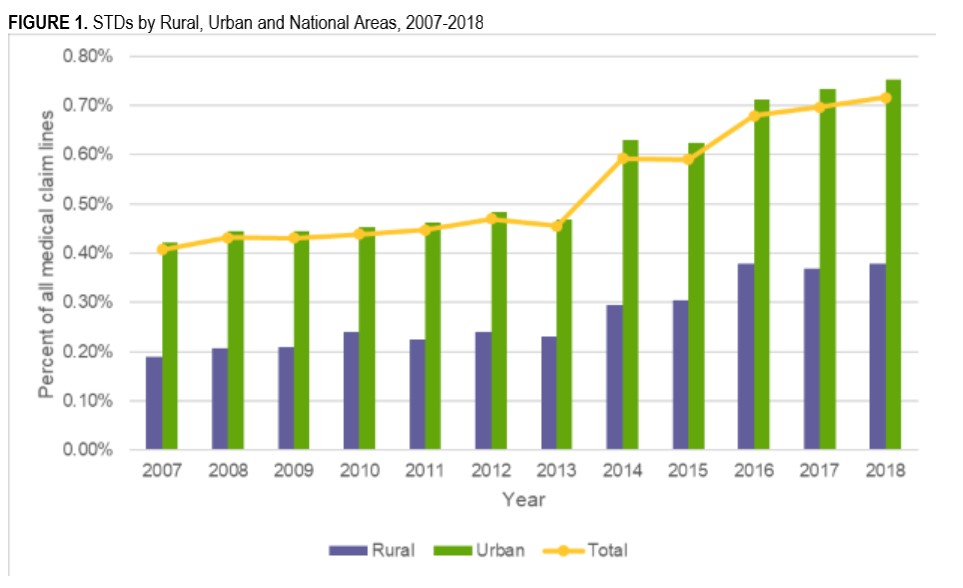 The 4 STD diagnoses whose associated claim lines had the greatest percent increase from 2007 to 2018 as a percentage of all medical claim lines were:

The age groups most associated with STDs in 2018 varied by the specific disease. The age groups that accounted for the largest share of claim lines were:

From 2007 to 2018, claim lines with gonorrhea diagnoses as a percentage of all medical claim lines by gender increased 326% in males compared to 47% in females (FIGURE 2).

In individuals over 60 years of age, hepatitis B was the STD that showed the highest percent increase in claim lines from 2007 to 2018, and claim lines for hepatitis B increased more in the over 60 cohort (149%) than in any other age group.

The age groups with the greatest increase in claim lines from 2007 to 2018 were:

It is central to FAIR Health’s mission to use our vast repository of claims data to research public health concerns and support such research by others. We hope this information brings greater clarity to the growing problem of STDs.

For the FAIR Health infographic on STDs, click here.