Melody Ryan, PharmD, MPH, and Stephen J. Ryan, MD, MA
First described almost 50 years ago, chronic inflammatory demyelinating polyneuropathy (CIDP) is a rare autoimmune disorder characterized by progressive peripheral neuropathy. CIDP is difficult to diagnose, but early diagnosis can be crucial to prevent permanent nerve damage. Initial treatment options include corticosteroids, immunoglobulin given by intravenous administration, and therapeutic plasma exchange. Subcutaneous administration of immunoglobulin provides a new option for patients with CIDP that has the potential to increase independence and improve tolerability. This article reviews the epidemiology, diagnosis, treatment options for first- and second-line therapy, treatment guidelines, and monitoring parameters for CIDP.
Am J Manag Care. 2018;24:-S0
Chronic inflammatory demyelinating polyneuropathy (CIDP) is an acquired autoimmune disorder directed against the myelin sheath of peripheral nerves.1 It was initially characterized as chronic inflammatory polyradiculoneuropathy by Dyck et al in 1975, but cases consistent with probable CIDP were described as early as 1958.1,2 CIDP is rare, affecting approximately 40,000 patients in the United States.3 It has a variable course that can be relapsing-remitting, stepwise progressive, or gradually progressive.1 It also has typical and atypical phenotypes that present with different features. All of these factors likely contribute to diagnostic delays for patients with CIDP.4,5 Greater understanding of CIDP is needed because early diagnosis and treatment are crucial to prevent permanent nerve damage and resulting disability.1,6,7 The complexities of diagnosing and treating CIDP provide unique challenges for managed care organizations. The purposes of this article are to provide managed care clinicians with current concepts in the diagnosis and treatment of CIDP as well as highlight recent therapeutic innovations, such as subcutaneous (SC) administration of immunoglobulin (SCIg).

In CIDP, cellular and humoral components of the immune system attack myelin on large peripheral nerve fibers, leading to demyelination that manifests as weakness, numbness, paresthesia, and sensory ataxia.1 As the disease progresses, axonal loss occurs secondary to demyelination and is associated with a poor prognosis.1,6,7 CIDP is a heterogenous disorder with typical and atypical phenotypes that may or may not share the same pathogenesis.8 Although a single autoantibody has not been identified to act as a biomarker for CIDP overall, specific autoantibodies have been identified against paranodal proteins within the nodes of Ranvier in the peripheral nerves of about 10% of patients.9,10 Autoantibodies identified so far include vinculin, LM1, neurofascin-155, neurofascin-186, gliomedin, and contactin-1.11-14 Some of these may have prognostic significance and may also predict a poor response to specific immunomodulating drugs.15,16 For example, contactin-1 antibodies have been associated with a later onset of CIDP and a more aggressive course.16

Emerging data suggest a possible genetic contributor to CIDP. In a recent study, patients with CIDP had a high frequency of perforin gene variations that impair the function of cytotoxic T and natural killer cells.17 Identification of potential genetic determinants, in addition to the autoantibodies found in subsets of patients, illustrates the need for large registries and biobanks to collect data from patients with CIDP.8,18

CIDP has a variable course and treatment response; some patients experience a cure or remission, whereas a minority progress despite treatment. Among the first cohort of 53 patients with CIDP reported by Dyck et al in 1975, approximately 60% remained ambulatory, 25% became confined to a wheelchair or bed, and 10% died from their disease over a mean follow-up of 7.5 years.2 A more recent cohort of 38 Japanese patients with CIDP who had received immune-modulating therapy were followed for 5 years.25 Although 26% had achieved a complete remission lasting at least 2 years without treatment, 61% had a partial remission and 13% had severe disability and were unable to walk. In a larger cohort of 106 patients with CIDP for a mean of 6.4 years (range, 3 months to 23 years), 11% of patients were in remission without treatment for at least 5 years, 44% had active disease that was stabilized with treatment, 7% were improving after recent treatment initiation, and 18% were treatment naïve or treatment refractory with unstable active disease.26 In a recent survey of 41 patients with CIDP for a mean duration of more than 7 years, almost 40% reported needing assistance with activities of daily living.4

Motor and proprioceptive deficits predominate over autonomic symptoms and pain in CIDP.1 This is attributed to greater susceptibility of motor and proprioceptive nerve fibers to demyelination because they are surrounded by a thicker myelin coat than autonomic and pain fibers. Although pain is usually considered a secondary symptom of CIDP, studies evaluating pain intensity have reported severe pain in 13% to 17% of patients with CIDP.27

The typical form of CIDP that occurs in about 50% of patients is characterized by proximal and distal weakness.1,19 Atypical subtypes include a predominantly distal distribution (distal acquired demyelinating symmetric; 2%-17% of patients), an asymmetric distribution (multifocal acquired demyelinating sensory and motor neuropathy or Lewis-Sumner syndrome; 6%-15%), pure sensory (4%-35%, including chronic immune sensory polyradiculopathy, which affects 5%-12% of patients), and pure motor (4%-10%).19 Focal CIDP is extremely rare (1% of patients). There is a temporal continuum between the demyelinating form of Guillain-Barré syndrome, which is referred to as acute inflammatory demyelinating polyneuropathy (AIDP), and CIDP in patients initially diagnosed with AIDP that do not recover and may later be diagnosed with CIDP.1

Although many sets of diagnostic criteria have been developed for CIDP, the criteria used most often in current clinical practice were developed by the European Federation of Neurological Societies and the Peripheral Nerve Society (EFNS/PNS).20 Although other diagnostic criteria are highly specific, they lack sensitivity, which may lead to underdiagnosis of CIDP. In a study of 151 patients with CIDP and 162 control patients, the EFNS/PNS criteria had sensitivity of 81.3% and specificity of 96.2% for definite or probable CIDP.20 Sensitivity of other diagnostic criteria in this study ranged from 45.7% to 79.5%.20 As shown in Table 1,28 the diagnosis of CIDP according to EFNS/PNS criteria is based on clinical history, physical examination, electrophysiology, and supporting laboratory tests.

EFNS and PNS recommend that the diagnosis of CIDP should be considered in any patient with progressive symmetrical or asymmetrical polyradiculopathy that is relapsing and remitting or that progresses for longer than 2 months.28 Commonly reported signs and symptoms of CIDP are shown in the Sidebar.1,28 Electrophysiologic testing, the sensitivity of which is improved by testing more than 4 nerves, is necessary to confirm the diagnosis. The testing of 3 limbs may improve the diagnostic certainty of electrophysiologic testing.29 Supportive criteria, such as somatosensory-evoked potentials for sensory CIDP, can help confirm the diagnosis.28 High-resolution ultrasound is a readily available tool that can be used at the bedside. Recent study results have demonstrated the potential utility of measuring abnormal nerve enlargement, both in the brachial plexus and proximal median nerve segments in the arm, with high-resolution ultrasound in the differential diagnosis of CIDP.30,31

Misdiagnosis is common in CIDP, especially in the atypical subtype. In a retrospective study of 59 patients with presumed CIDP referred to a university neurology group, 47% did not meet EFNS/PNS diagnostic criteria.32 Almost half of misdiagnosed patients met clinical criteria for atypical CIDP. Misinterpretation of nerve conduction studies was a major contributor to misdiagnosis. Almost 80% of patients who had been misdiagnosed with CIDP had received treatment with intravenous immunoglobulin (IVIg) or a corticosteroid for a mean of 18.6 and 16.2 months, respectively. Some experts estimate that up to one-third of patients in the United States with a diagnosis of CIDP do not have the disease.33 It is encouraged to seek referrals to Centers of Excellence designated by the GBS-CIDP Foundation International Advisory Board for expert advice and second opinions, which can be found at gbs-cidp.org/support/centers-of-excellence.34 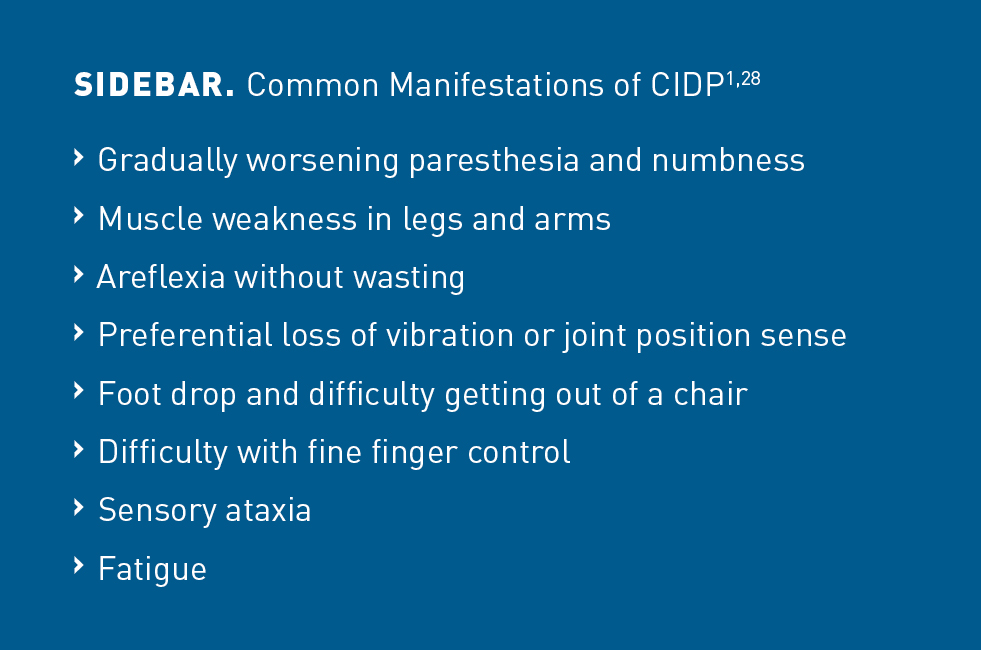 Healthcare resource utilization and costs are substantial for patients with CIDP. In 2011, a study analyzed insurance claims data for 73 patients with CIDP among 6.5 million covered lives in 9 US commercial health plans.35 The annual health plan cost per patient was almost $57,000. Pharmacy claims were the primary cost driver, accounting for 57% of health plan costs. Just 49% of patients received immunomodulatory treatment for CIDP, including IVIg (26%), prednisone (16%), and immunosuppressants (7%); 2 patients received plasma exchange. IVIg accounted for 90% of drug costs, with a mean cost of $108,016 (± $18,437) per patient. Frequent use of anticonvulsants, opiates, and antidepressants suggested a burden of neuropathic pain.35