Currently, there are a total of 7000 rare diseases that affect 30 million patients. These patients and diseases range from 20,000 patients who suffer from bleeding disorders to less than 40 patients with NAG-S enzyme deficiency.

Despite the infrequency of rare diseases, they create significant cost and care burdens for payers and patients. Hereditary angioedema can cost the average patients more than $3 million.

Patients with rare diseases often face an inaccurate diagnosis when they originally seek care from a physician. According to a new infographic from Express Scripts, it takes often takes up to 5 years and 7 physicians before a correct diagnosis can be established. The importance of diagnosis is heightened in these cases because 30% of children with rare diseases do not live past 5 years old.

A recent Australian study found that of 462 children with a rare disease, 60% were diagnosied within the first 12 months of life, but 8% waited more than 3 years for diagnosis, and 7% of the children remained undiagnosed.

“Prompt, correct diagnosis is very important for families, as it enables them to explain their child’s disease to others, to stop blaming themselves for their child’s condition, it may restore reproductive confidence and alleviates some of the stress of not knowing what is wrong and what to expect in the future,” the authors had explained. 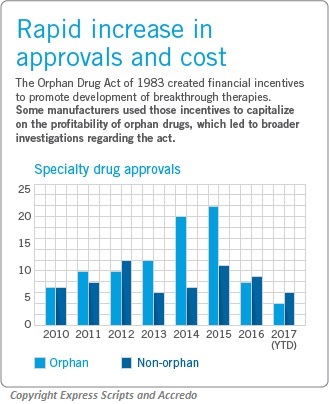 In addition to the emotional and social challenges, there is a significant financial burden linked to rare diseases. The average costs per patient in 2016 for the top 100 orphan drugs was $140,000 compared to $28,000 for the top non-orphan drugs. The development of new drugs can significantly improve the lives of patients or even cure their disease; however, the high costs create a substantial burden.

In 1983 the Orphan Drug Act was established to promote the development of new therapies through financial incentives, and there has been progress. Currently, more than one-third of the specialty drugs in the pipeline are orphan drugs.

However, the Act led many manufacturers to use the incentives to capitalize off of orphan drugs, which contributes to the severe increase in costs, noted Express Scripts. And as of now, there are only 441 FDA-approved orphan drugs and 95% of rare diseases still don’t have an FDA-approved therapy.