Thea Danze lights up the room wherever she goes; she loves space and music and fire trucks. Since 2012, she has been the namesake and spokesperson for a foundation created to raise funds and awareness about pediatric brain tumors. Called Thea’s Star of Hope, the foundation supports development of therapies that will treat brain tumors without the toxic adverse effects that Thea has endured.

For Thea Danze, the trip to Children’s Hospital of Philadelphia (CHOP) on July 13, 2018, was a milestone long in the making.

The 11-year-old had spent over 7 years—more than two-thirds of her life&mdash;living with a port that delivered therapy to fight a brain tumor discovered when she was 4 months old. But on this day, the port was coming out.

In March 2017, Thea’s doctors at CHOP decided she was doing well enough that she could stop receiving half doses of bevacizumab every 4 weeks. They would wait and watch and hope that her tumor would remain stable. A magnetic resonance imaging (MRI) scan in August 2017 wasn’t promising, but by February 2018, the tumor appeared stable, and by this summer, it was better still. The tumor—a low-grade, or slow-growing, glioma&mdash;wasn’t progressing.

Being off treatment was a game changer for Thea as well as the whole family. It meant fewer trips to the hospital. It meant a winter without getting sick. It meant her parents, Trisha and Jeff Danze, could take Thea and her younger sister, Lilly, to Disney World.

To Thea, going to Disney World meant “totally learning to ride my scooter. My scooter isn’t like any other scooter,” she said in an interview. “The power lasts for the entire day.”

The little girl who once took chemotherapy so toxic that she had to be fed through a stomach tube was now able to ride her scooter all over the Magic Kingdom. “It was a really big deal,” she said.

This is a girl who has survived a stroke, 5 different courses of treatment, and more surgeries than she can remember. When she was 5, the shunt that controlled her hydrocephalus malfunctioned, and she had to learn to walk all over again. Motor and visual deficits persist. In May, the Danzes moved around the corner so that as Thea gets older, she will have a full bathroom on the first floor and stairs that are easier to navigate.

Thea is also the girl who lights up the room wherever she goes; she loves space and music and fire trucks. Since 2012, she has been the namesake and spokesperson for a foundation created to raise funds and awareness about pediatric brain tumors. Called Thea’s Star of Hope, the foundation supports development of therapies that will treat brain tumors without the toxic adverse effects that Thea has endured.1

Trisha Danze sees the need for research funding across the spectrum—from treatment to family assistance.

“There’s definitely a need for more funding for pediatric brain tumors and children’s cancers in general,” she said during a visit with Evidence-Based Oncology™ (EBO™), joined by both Thea and Lilly. “These kids go through a lot of treatment, and as a result, they have a lot of side effects that they have to live with for the rest of their lives.”

Apparently, FDA agrees. On July 23, as EBO™ was going to press, Commissioner Scott Gottlieb, MD, followed through on a commitment to close a loophole in the Pediatric Research Equity Act, passed in 2003. Drug companies had been using the orphan drug exemption to treat small populations of adults with therapies to avoid research in children, but an FDA guidance said the agency will no longer grant these exemptions.5

Before switching to bevacizumab, Thea was receiving treatments that were far more toxic. Concern about what Thea and others like her might face down the road drives the foundation’s work, and with good reason. The Childhood Cancer Survivor Study (CCSS), funded by the National Cancer Institute, began tracking survivors in 1994 and reports that children treated for cancer can develop cardiac effects, mood and memory problems, secondary cancers, and psychosocial challenges long after treatment ends. In recent years, the study has focused on “late effects” of treatment and examined whether childhood cancers can be treated with less medication to reduce long-term effects.3

For Thea, the goal of the foundation is simple: “Personally, my favorite thing about Thea’s Star of Hope is that it’s like shooting laser guns at brain tumors until they get smaller and smaller and smaller, until poof! They disappear.”

A Commitment to New Approaches

The “laser gun” description is not far off: The foundation is deeply committed to personalized medicine. Early on, the fund formed a relationship with the Children’s Brain Tumor Consortium to promote data sharing and collaboration across institutions; in February 2016, Thea’s Star of Hope was recognized as a funding source for a study published in Nature Genetics, led by Adam Resnick, PhD, director of the Center for Data Driven Discovery in Biomedicine at CHOP. That study involved pooling data from 249 cases across several institutions, including CHOP, that uncovered a 3-way mechanism in which a mutation drives tumor development.6,7 The results led to a new research commitment for Thea’s Star of Hope.

The study in Nature Genetics helped scientists trying to understand an important problem in treating pediatric gliomas: Although there has been some success in understanding BRAF mutations that drive many tumors, there are opportunities for error. Select the wrong chemotherapy, and the tumor can grow. So Trisha and Jeff Danze and the foundation board were drawn to a study taking a different approach, the Pacific Pediatric Neuro-Oncology TAK-580 Trial.8 TAK-580 represents a new drug class, a type II BRAF inhibitor, which clinicaltrials.gov states would work by “locking the mutant BRAF molecule and the next molecule in the activation chain together,” thus blocking the signal that tells the tumor cell to divide.9 In practical terms, the therapy would have the potential to target multiple mutations, eliminating the risks of selecting the wrong therapy. Thea’s Star of Hope has committed to raising $100,000 for this trial through 2020.

Although there’s lots of excitement on the therapy front, the foundation is also committed to programs that promote data sharing and family services. “We like to have other families involved with their kids and share their stories,” Trisha Danze said. “Having a child with a serious medical issue affects the whole family.”

As more survivors of childhood cancer live longer, the need for better aftercare services is becoming apparent. Major academic centers like CHOP, the Cleveland Clinic, and the Dana-Farber Cancer Institute advertise services, but the CCSS still finds gaps in follow-up care. The study also concluded that survivors of pediatric cancer were 3 times more likely to develop a chronic condition and 8 times more likely to have a severe or life-threatening condition than a sibling group.3,10

It’s a rainy day in June, but the ballpark in Trenton, New Jersey, is filled with fans: Heisman Trophy winner turned minor league slugger Tim Tebow is here, on hand with the Mets’ Double-A affiliate to take on the Thunder, the Yankees’ counterpart. But it’s not just Tebow who drew the crowd: Some of the game proceeds will benefit Thea’s Star of Hope. One section is a who’s who of Robbinsville, New Jersey, where the Danzes live. A short video highlighted foundation events that have become part of the community’s fabric: a masquerade ball and an annual 5K complete with Thea’s favorite, an inflatable fire truck. This spring, Trisha was named the grand marshal of the community’s St. Patrick’s Day parade.

Many in Robbinsville know Thea’s story: Everything was fine until she was 4 months old, when her wiggling eyes and screaming told her mother something was seriously wrong. A computed tomography scan revealed a large mass, and she underwent a series of surgeries to remove 50% of the tumor. Trisha and Jeff Danze learned the diagnosis: glioma. But the setbacks were not over. Within days, Thea suffered a stroke that would lead to years of speech and occupational therapy.

More than decade later, their world is forever changed. Care coordination may be a healthcare buzzword, but it’s become Trisha Danze's full-time job: She’s the quarterback for Thea’s medical and educational needs. On the medical side, that means managing Thea’s physical therapy, psychosocial treatments, and nutrition regimen. Besides CHOP, Thea has spent considerable time at Children’s Specialized Hospital addressing her physical challenges, especially after the setback when her shunt malfunctioned 6 years ago. On the education side, Trisha Danze must engage the school district on Thea’s school placements and attend meetings on her individual education plan, or IEP. Trisha Danze also schedules Thea’s MRIs and sends her to camp.

And she deals with the insurance company.

“Don’t deny! Don’t deny!” Trisha Danze said when asked what payers could do to ease the lives of families with children with cancer. “That’s the biggest issue we see now with families,” she said, explaining that patients who don’t have time to spare often waste it going through step therapy until they get to the targeted therapy that would do the most good.

But she savors the victories: Trisha credits the CHOP Child Life staff for working with Thea to handle an MRI without sedation. Compared with 10 years ago, “Child Life has really expanded and become a much bigger part of children’s care in the hospital, and that really makes a huge difference,” Trisha Danze said. “Sometimes you just don’t know what to say to your kid.”

What is their vision for Thea’s Star of Hope? Trisha, Thea, and Lilly each gave a version of Lilly’s answer:

“It will be helping kids.” 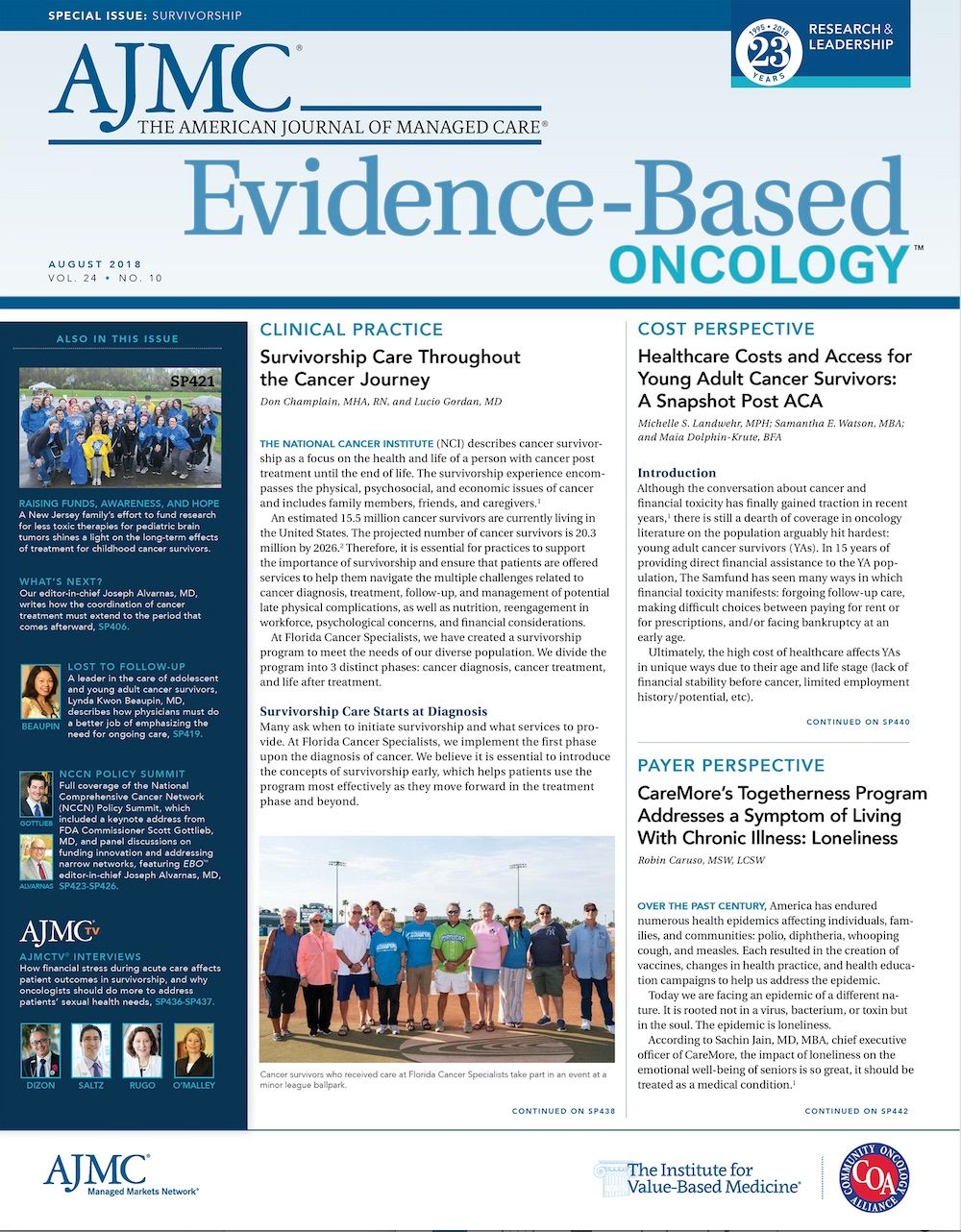