Joyce furthered the discussion on the role of pharmacists in patient-care started by Haydon-Greatting by providing case studies that stemmed out of a CMS-funded research grant.

Geoffrey Joyce, PhD, a health policy and outcomes investigator at the University of Southern California (USC) School of Pharmacy, presented findings from a CMS-funded

grant during the second session of “Patient-Centered Diabetes Care: Putting Theory in Practice” on April 11, 2014. In his research, Joyce sought to measure the impact of integrating clinical pharmacists into primary care and medical homes. The premise of the grant proposal to CMS was the increased need for access to primary care as a result of the Affordable Care Act (ACA), considering that 45% of the population suffers from chronic disease. Joyce stressed the current lack of adherence to medication,

noting that 50% of patients experience reduced clinical benefits of their treatment by not taking the appropriate dose, resulting in waste.

“We asked, ‘Well, what about the role of pharmacists?’” Joyce remarked. The role in patient care of these highly trained and knowledgeable individuals has not received enough credit or recognition. As a part of USC’s pharmacy school, he had ample opportunity to interact with pharmacists. By including them in patient care, “We’ve been very, very successful in treating high-risk populations and inner city clinics, and here’s some data to show,” said Joyce. Based on the pharmacists’ recommendations, he noted, doses were modified and medications were included or substituted in regimens; anecdotal evidence indicated improved patient health.

The approach used was to partner with AltaMed, which runs 40 patientcentered primary care clinics for underserved communities in Southern California.1 The study was conducted in 10 of the 40 clinics; each clinic included a pharmacist (additionally trained through an online course and certification program), a resident pharmacist, and a pharmacy technician. Also, a telehealth clinical pharmacy program helped provide remote services.

The bottom line? CMS was interested in ways and means to save costs. “To save money, you really have to keep people out of the hospital,” Joyce said. “So our aim was, ‘Let’s target very highriskpatients who we think we can save money on.’” He and his research team scanned the medical records of patients at the AltaMed clinics to identify the “superutilizers” who could potentially be managed much more successfully through improved clinical pharmacy services. Additionally, patients in these overburdened clinics who were referred to a pharmacist for counseling were evaluated, as were patients who returned home after hospitalization.

A typical counseling session lasted 20 to 40 minutes, a majority of which involved patient education on disease. Joyce noted that for the many Hispanic patients in this population, some of whom are unaware of the comorbidities associated with their disease, it is necessary for the pharmacist to speak Spanish to effectively communicate.

At 14 months following launch, the program has 3500 patients enrolled, with the pharmacist-resident team counseling about 14 to 22 patients daily. In the second year, elderly, high-risk patients, typically much more difficult to counsel, were included in the PACE (Prevention, Adherence, Collaboration, Education) clinics.

The program has provided some calculable returns, including a 2-point drop in glycated hemoglobin (A1C) among patients enrolled for at least 180 days in the program, though according to Joyce, the controls in this experiment are not ideal. He emphasized, though, that the shift in the distribution of patients that showed a drop in their A1C levels, but not the actual mean of the data, was very encouraging. Additionally, their data showed that the observed effects persisted even after the intervention had stopped, which was equally encouraging.

Since diabetes and cardiovascular effects are coupled, the researchers also monitored blood pressure in the diabetes patients. A majority of the medication- related problems observed were associated with effectiveness, safety, and poor adherence, primarily due either to dosing that was inadequate to reach treatment goals or to suboptimal evidence-based guidelines.

One of the initial challenges that the program had to overcome was a perceived “turf war” between physicians and pharmacists, said Joyce, until the physicians realized the value of the pharmacists’ contributions. “Over time, I think most of the clinicians have accepted it and said, ‘This is great for my practice. Not only do I have less time that I have to spend with each patient, but I think they’re being better managed.’” Generally, observed Joyce, “The relationship has been quite favorable, but it takes work. It absolutely takes work.”

Typically, an increase in outpatient use was observed in these clinics, with the pharmacy technician functioning as a case manager following up on patient progress. Although the outpatient arm may not save money for CMS, Joyce believes that increasing adherence via regular patient followup will achieve that goal. Initially, “we don’t think we’ll save—and as a matter of fact we’ll probably spend more. The only way we’re going to [ultimately] save money is to keep people out of the hospital,” he stressed, adding that so far, the program has had an impact not on the number of hospitalizations, but on the duration of stay post hospitalization, because the patients come in with less severe conditions that are easier to treat. So far, there has been “about a 23% reduction pre- and post intervention for treatments relative to controls.

And again, the controls aren’t perfect at this point,” he said. “This is encouraging.”

Despite this progress, Joyce and his team have not yet been successful in convincing CMS and payers that the program can save money. The key would be to show that the benefit of program participation is clinical improvement even after the intervention stops. The team is working on using remote intervention techniques, such as text messaging, for long-term maintenance.

Joyce concluded by saying that the cost-effectiveness studies ignore patient satisfaction, quality of life, ability to work, and other metrics that indirectly contribute to cost savings. His research efforts are currently directed toward understanding mechanisms that can dictate the outcomes marker of A1C, such as patient education, selfmanagement, and adherence. “I think it’s really important to understand what resonates with these folks,” he said, “if we’re going to have long-term impact on this population.” Reference

Download PDF: Assigning Value to the Role of Clinical Pharmacists in the Care of Diabetes Patients 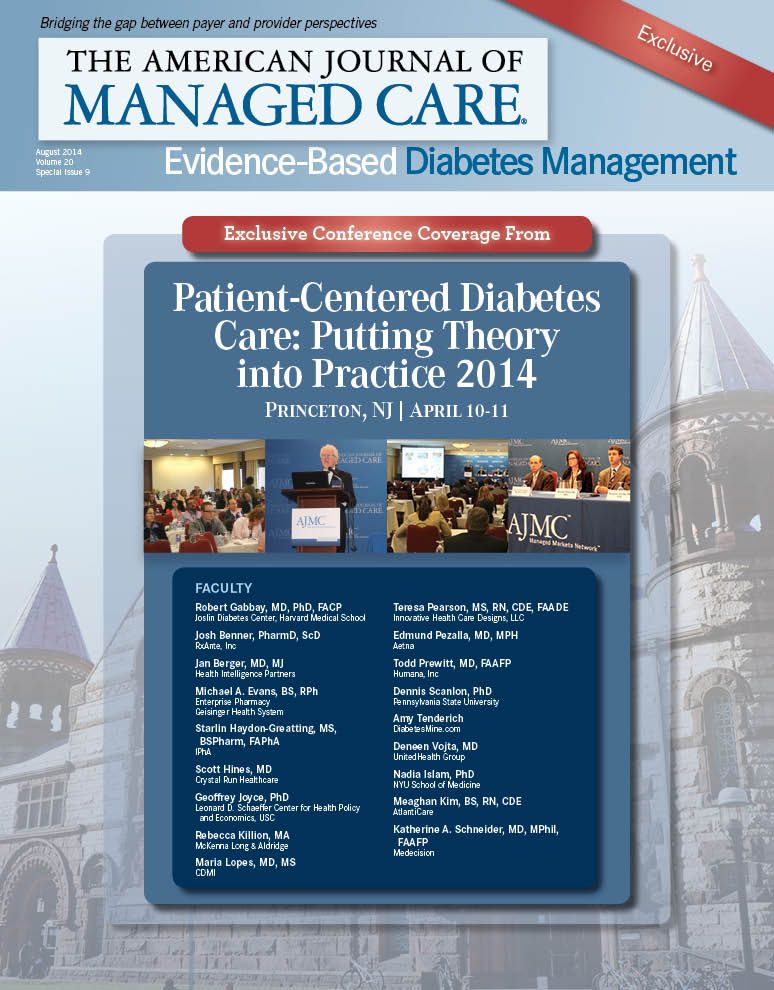