Medicare value-based care programs are under great scrutiny to ensure that they can drive demonstrable savings and quality improvement. Adoption of higher-value biosimilar drugs by participants in Medicare’s Oncology Care Model (OCM) could drive the pilot program closer to its goal of generating net savings to Medicare.1

Oncology practices participating in the OCM are responsible for the quality and total cost of care—including drug spending and inpatient admissions—for their patients receiving chemotherapy.1

Drug spending constitutes approximately two-thirds of the program’s total spending.2 Part B drug spending alone accounts for about 45% of OCM spending.2 The most recent program evaluation, published in January 2021, included data from 6-month episodes triggered through January 1, 2019 (performance periods [PPs] 1-5), and found that the program successfully achieved reductions in per-episode spending. However, these reductions were insufficient to cover new funds from the Center for Medicare and Medicaid Innovation (CMMI): (1) Monthly Enhanced Oncology Service (MEOS) payments made to participating practices to support care redesign and enhanced oncology services, and (2) additional performance-based payments (PBPs) that practices receive if they meet financial and quality goals.3

Notably, because of the relative novelty of biosimilar drugs on the market and the significant lag in claims-based analyses, the most recent program evaluation largely predates the uptake of these lower-cost alternatives. The March 2021 release of initial PP7 OCM reconciliation data, reflecting 6-month episodes triggered between July 2, 2019, and January 1, 2020, offered the first oppor-tunity to observe most biosimilar cost comparisons, and this signals more favorable program evaluations once these data are incorporated into findings.

Biosimilars Support Value-Based Care
Because there are no clinically meaningful differences between biosimilars and their reference products and they are generally available at lower costs, biosimilars present an opportunity to reduce Medicare spending without impacting the quality of care provided to patients.4

Administered by infusion or injection in a physician’s office or hospital outpatient department setting, all cancer biosimilar drugs are reimbursed under Medicare Part B, which sets drug prices using the Average Sales Price (ASP) methodology.5 CMS calculates the ASP quarterly by using the weighted average sales price data submitted by drug manufacturers; these data include discounts such as rebates and volume, prompt payment, and cash payment discounts.6 There is a 6-month lag between the payment allowance limits set by Medicare—generally 106% of ASP—and the ASP data submitted by drug manufacturers. 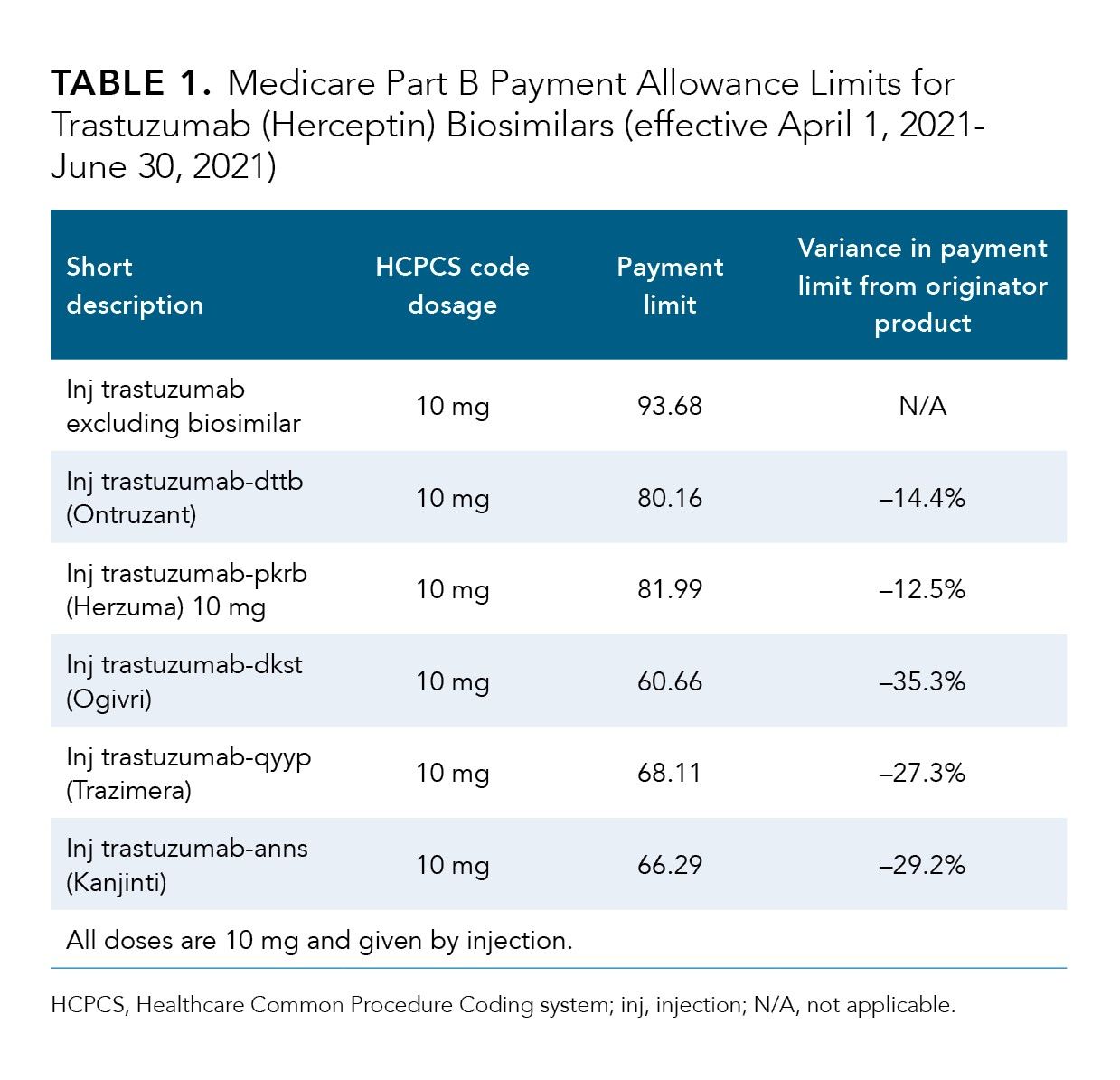 In another example, the current Part B payment allowance limits for bevacizumab (Avastin) biosimilars range from 20.9% to 27.1% lower than that of the originator product, as shown in Table 2. 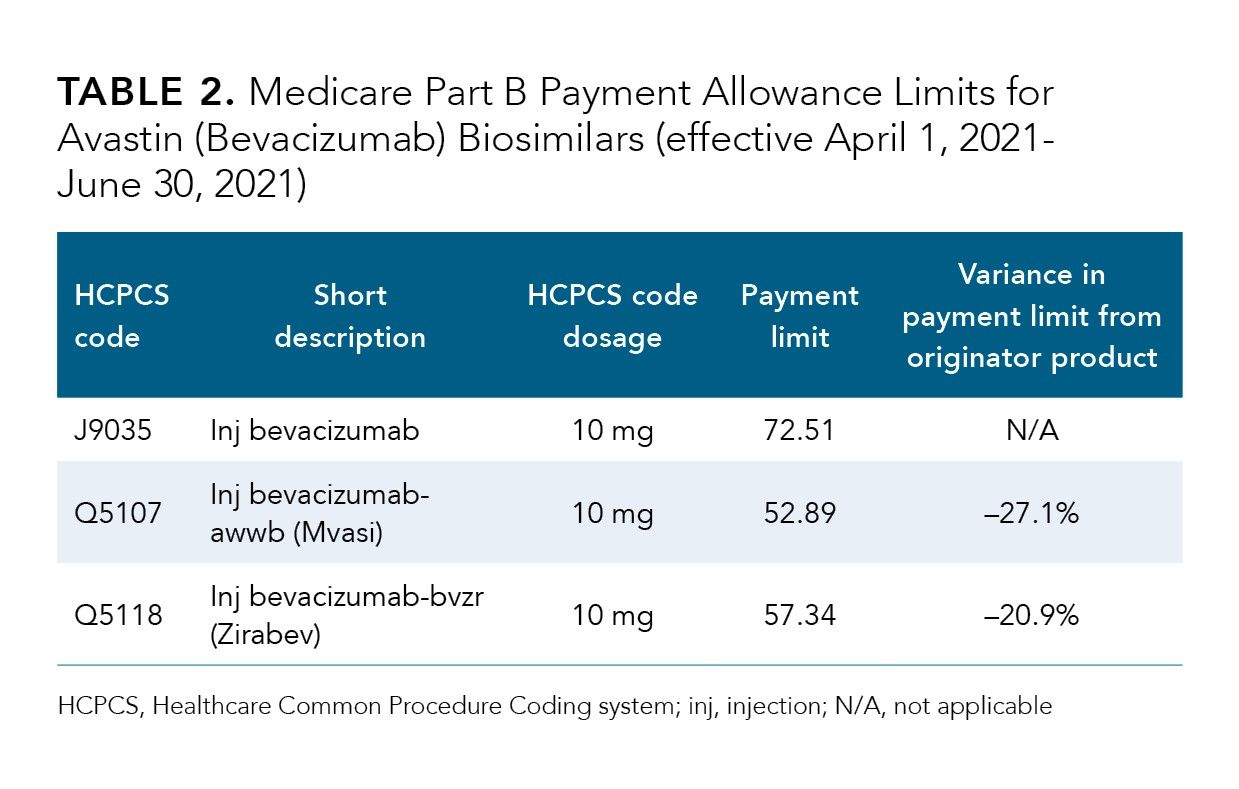 Availability of Biosimilar Drugs7
As shown in the Figure, conversion to biosimilar products as a cost savings lever largely materialized after the program went live. The only 2 biosimilar products approved by the FDA prior to the start of the OCM on July 1, 2016, were filgrastim-sndz (Zarxio), the reference product of which is filgrastim (Neupogen), and inflix-imab-dyyb (Inflectra), the reference product of which is infliximab (Remicade). Filgrastim is a supportive care medication used to treat low white blood cell count, which can occur in patients undergoing chemotherapy, and infliximab is an immunosuppres-sive drug that treats rheumatoid arthritis, among other conditions. The FDA did not approve the first biosimilar for cancer treatment, bevacizumab-awwb (Mvasi), the reference product of which is bevacizumab (Avastin), until the model’s third performance period. Of the 5 biosimilars for trastuzumab, a drug used to treat certain breast and stomach cancers, 3 were approved by the FDA during the OCM’s PP6 (episodes starting between January 2, 2019, and July 1, 2019). The length of time between a drug’s approval and its entrance to the market can vary. There is also a lag between the a drug’s approval date and its addition to the ASP drug pricing files. For example, rituximab-abbs (Truxima), the first biosimilar for rituximab (Rituxan), which treats conditions including non-Hodgkin lymphoma and chronic lymphocytic leukemia, was approved in November 2018 and added to the Medicare ASP Pricing File in January 2020. This lag in information could delay the uptake of cost-effective drugs. Once a practice adopts a biosimilar, it is not uncommon for the conversion to take a year or more. 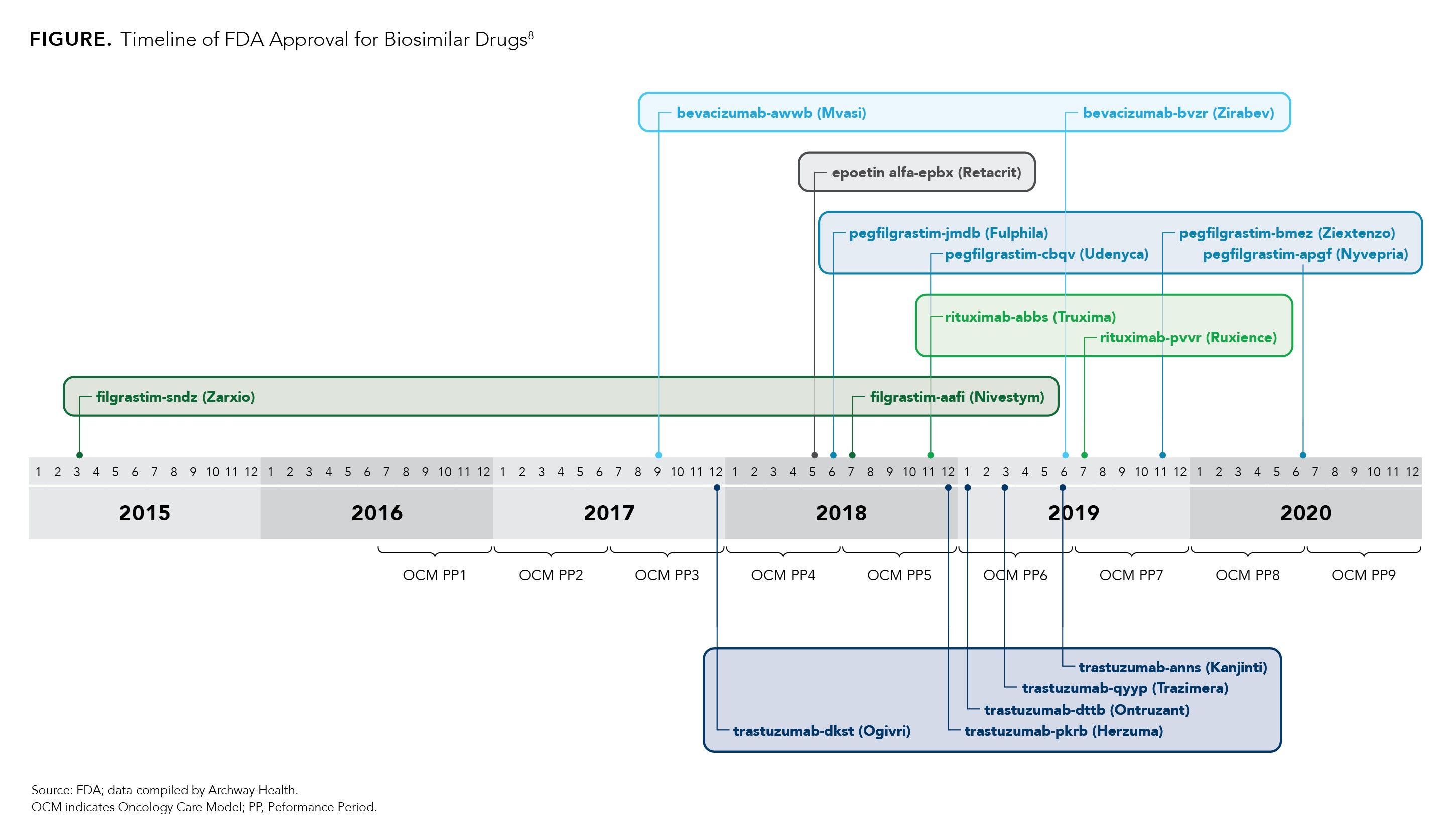 Previewing the Full-Scale Potential of Biosimilar Conversion
The first biosimilar for filgrastim was approved in March 2015, so trends in its adoption can be observed from the start of the OCM. One of the key findings of the January 2021 OCM program evaluation was the “pronounced shift toward use of biosimilar filgrastim (vs more-costly originator filgrastim)”3 among OCM participants. The OCM evaluation described that, among episodes in which filgrastim, a granulocyte colony-stimulating factor, was used, participation in the model was associated with “faster adoption and greater use of less-costly biosimilar filgrastim.”3 This finding suggests that there may be broader adoption of biosimilars by OCM practices as more of these products become available on the market, a trend Archway Health has identified in the analysis of more recent claims data.

LYMPHOMA AND RITUXIMAB. Among lymphoma episodes in which a patient was treated with rituximab, Archway found that the average 6-month episodic drug cost for rituximab ranged between $18,000 and $22,000, varying by practice. Rituximab is used in approximately 70% of lymphoma episodes in the OCM; on average, the cost of the drug constituted more than one-third of total episode spending for lymphoma episodes in which the drug was used. Practices that switched to rituximab-abbs (Truxima) saved nearly 8% of the cost of rituximab ($1400-$1700) per episode on average. Table 3 shows he cost differential for a 6-week course of treatment in which the patient is administered 80 units of either rituximab or rituximab-abbs per treatment. 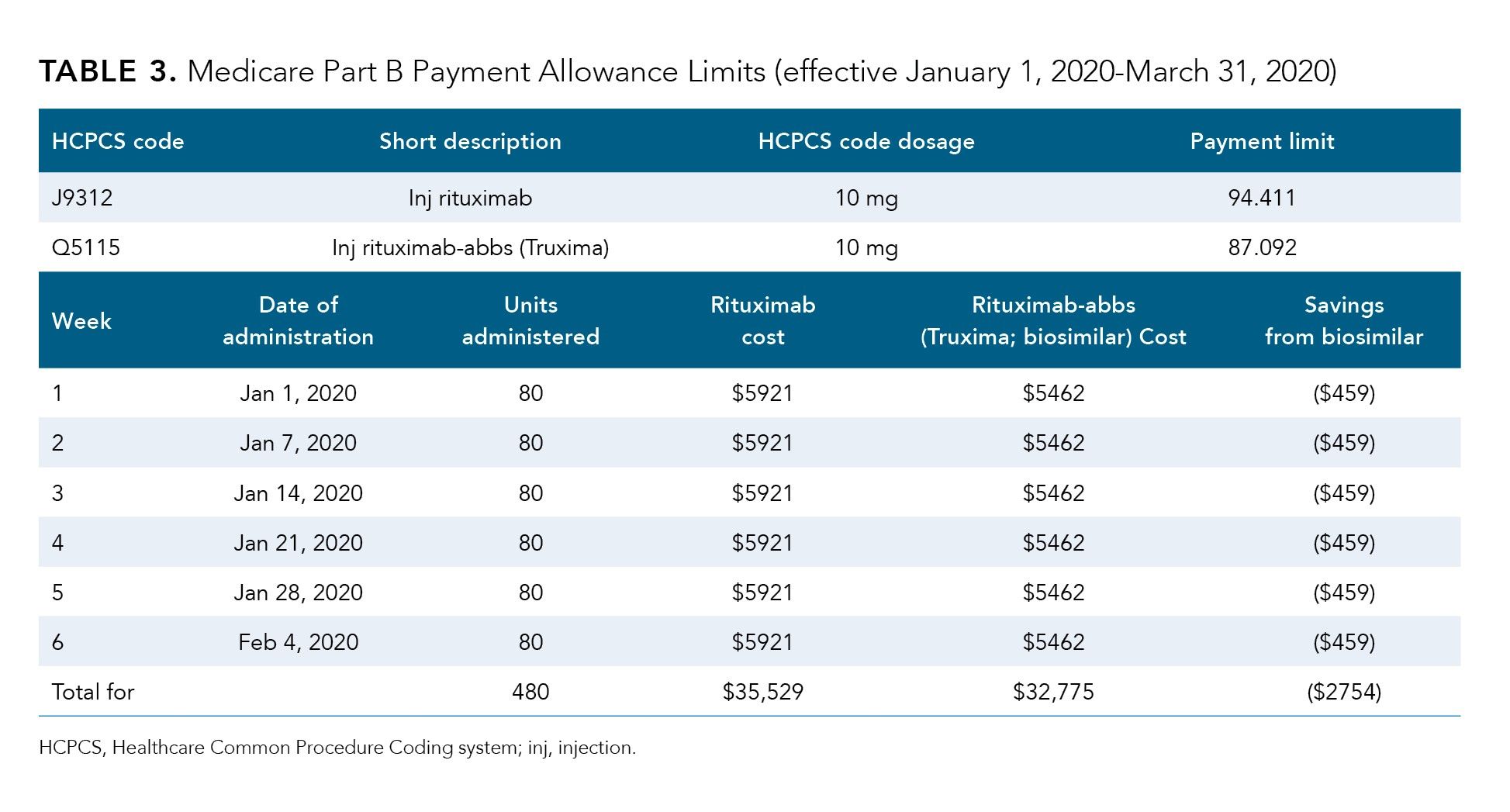 For reference, Table 3 shows the Part B payment allowance limits for rituximab and rituximab-abbs between January 1, 2020, and March 31, 2020, a time period contained within the 6-month runout period of PP7. For 1 medium-sized practice with 150 lymphoma episodes a year covered under traditional Medicare, the conversion to rituximab-abbs could generate between $150,000 and $200,000 savings to Medicare annually, some of which the practice can earn back as a bonus payment if quality goals are met.

SMALL INTESTINE/COLON CANCER AND BEVACIZUMAB. Among small intestine/colon cancer episodes in which the patient was treated with beva-cizumab, Archway found that the average 6-month episodic drug spend ranged between $18,000 and $23,000. On average, the cost of the drug constituted more than 40% total spending for small intestine/colon cancer episodes in which the drug was used, and the drug is used in more than one-third of these episodes in the OCM. Practices that switched to bevacizumab-awwb (Mvasi) saved nearly 14% of the cost of bevacizumab ($2500-$3100) per episode on average. Bevacizumab is used to treat a relatively large number of OCM cancer types beyond small intestine/ colorectal, including central nervous system tumor, female genitourinary cancer (ovary and other than ovary), head and neck, kidney, and lung. Cost savings to Medicare that result from the conversion to a bevacizumab biosimilar are substantial, but they vary based on the mix of cancer types treated at a given practice.

Once these data are folded into programmatic evaluations, the OCM will potentially be credited with greater savings than early reports have indicated. PP8 marked the turning point in which practices that had yet to earn PBP had to enter the 2-sided risk track or exit the program. As a result, the program shed nearly 30% of its participants, shrinking from 176 practices to 127.1 The combination of savings from biosimilar adoption along with CMMI no longer paying out MEOS to 30% of the original practice participants could put the program on a path to achieve net savings to Medicare. With the OCM sunsetting at the end of this year, it is critical for CMMI to launch the program’s successor, so momentum in the shift toward value-based cancer care is not lost.

Alignment with Aggregate Stop Loss Insurance
Because the adoption of biosimilars serves to control costs at a population level, it aligns well with a population-level approach to downside risk protection. Practices that have adopted biosimilars and are participating in or considering the 2-sided risk track in the OCM should evaluate aggregate stop loss protection, designed to limit overall losses, because aggregate policies generally have lower premiums than do specific policies, and aggregate policies can account for practice-level cost reduction efforts.

Benefits of Biosimilar Conversion in Other Value-Based Models of Care
Oncology practices that have adopted biosimilars have a strategic advantage over their competitors in other value-based models of care. In Medicare’s new Direct Contracting program, which went live on April 1, 2021, Direct Contracting Entities (DCEs) are at full risk for total cost of care for all Part A and Part B spending, including Part B drugs, and they are highly incentivized to partner with high-value specialists. There are 53 active Global and Professional DCEs, and in many cases, a single DCE has multiple geographic locations; the state of Florida has 15 active DCEs alone. Another cohort of DCEs will go live on January 1, 2022, and oncology practices should be prepared for the growing presence of DCEs in their local markets.

The adoption of biosimilars can also support value-based risk contracts with self-insured employers and commercial payers. However, one challenge that oncology practices face in the adoption of biosimilars is misalignment with commercial payers that may list different biosimilars on their formularies. On April 20, 2021, CMMI director Liz Fowler, PhD, JD, spoke9 during the spring conference of the National Association of Accountable Care Organizations about CMMI’s effort to determine how its value-based care models can transform health care delivery in the long term. In discussing CMMI’s priorities, Fowler declared that “we need to do a better job with multipayer alignment.” Ideally the successor program to OCM, expected to be announced later in 2021, will continue to incorporate a cross-payer approach to further drive value-based cancer care. 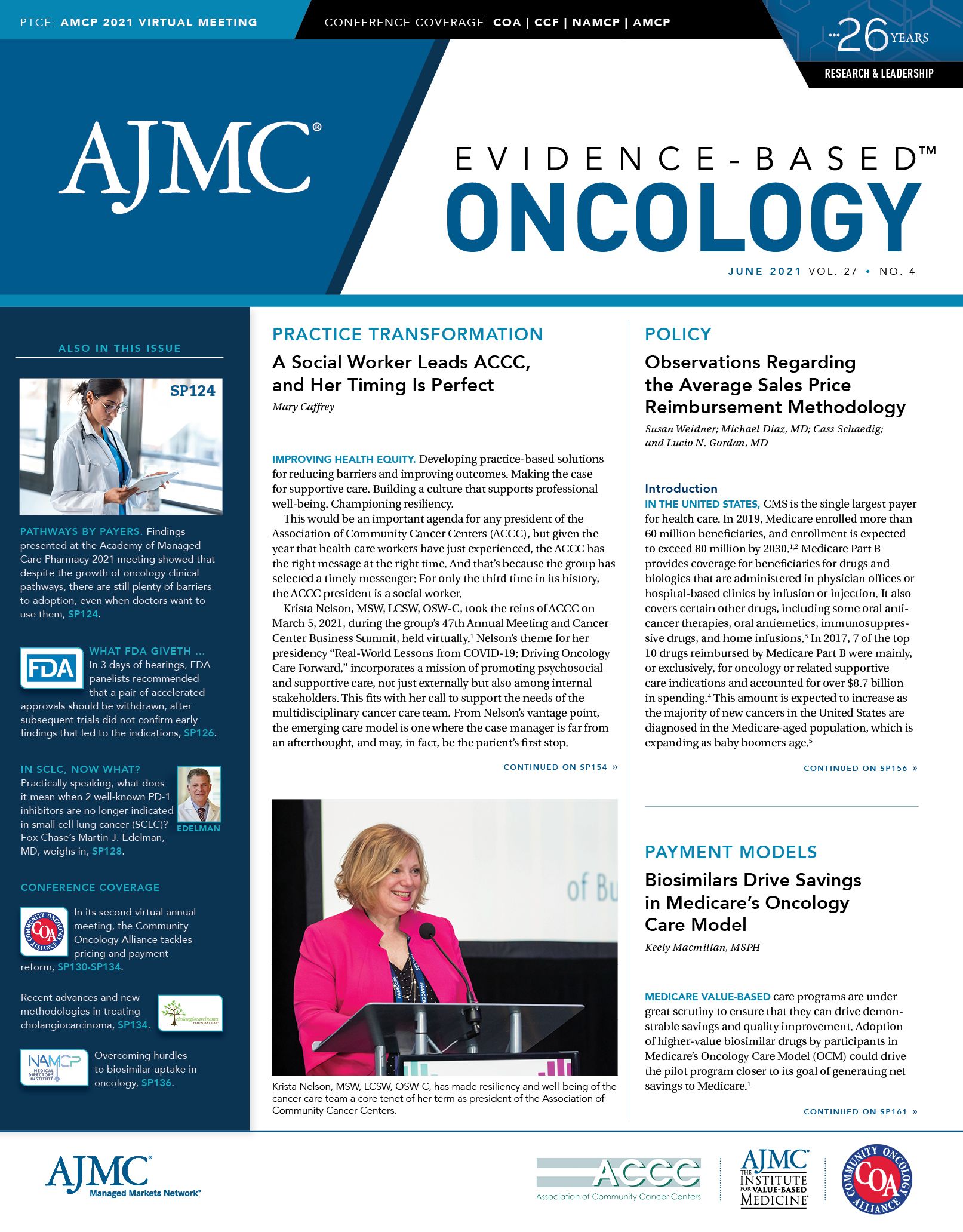 Compared with sorafenib, a combination of sintilimab and a bevacizumab biosimilar improved responses in patients with unresectable hepatocellular carcinoma (HCC).

On this episode of Managed Care Cast, we’re highlighting a hobby from a biosimilar expert who says he can make whisky more accessible and affordable through—you guessed it—his own biosimilar whisky.

Two ranibizumab biosimilars launched in the United States in 2022, but a new report shows comfort and familiarity with biosimilars has gone down compared with a year ago.

The addition of adalimumab biosimilars to formularies can help accelerate realized savings as the blockbuster drug Humira faces competition from multiple biosimilars, including 1 approved interchangeable biosimilar.