Recent studies have linked yoga and mindfulness with reduced stress, improved glycemic control, and even lower medical costs. Should these low-cost practices find ways to standardize to meet payers' needs? Or is it managed care that needs to adapt?

If an insurer found an activity with growing evidence of health benefits,1-3 the chance to help seniors stay active,4 and a following that had grown by 16 million people in 4 years,5 would it make sense to pay for it?

That’s a question being asked about yoga, and the related practice of mindful meditation, as health systems seek low-cost ways to prevent and treat diabetes, obesity, and metabolic syndrome. Over the past decade, and especially in the past 3 years, evidence has accumulated about the benefits of yoga and mindfulness, which are rooted in Eastern spiritual practices but have soared in popularity in the West.5 Studies show that yoga can help people reduce waist circumference6,7 and body mass index (BMI),2,3,5,8 improve cognitive functioning9 and sleep,10,11 and reduce depression.3,9,11 There is some evidence that yoga can improve blood glucose levels,12 although results vary.2

Related to yoga is mindfulness, with a focus on meditation instead of gentle movement. A recent clinical trial that added mindfulness to 1 arm of a weight-loss intervention found that the group with mindfulness training lost a bit more weight, but showed significant improvements in fasting blood glucose.13 A proof-of-concept study recently found that an intervention combining exercise, yoga, and mindfulness meditation greatly reduced anxiety, depression, and stress.11

With all this evidence, why don’t more health plans pay for yoga and mindfulness? While there is interest—especially from the national health insurer Aetna&mdash;the very nature of these practices may make them a tough fit for payer reimbursement. Managed care seeks standardization, while the practice of yoga or mindfulness can vary widely by teacher or tradition. As influential teacher Bo Forbes, PsyD, asked in a 2010 commentary: Can yoga be part of managed care and still be yoga?14

Frederick Hecht, MD, research director for the Osher Center for Integrative Medicine at the University of California San Francisco, told Evidence-Based Diabetes Management™ (EBDM™) in an interview that while evidence of the health benefits of yoga and mindfulness is growing, more work is needed before managed care plans will consider reimbursement.

“I think it could be on the horizon,” Hecht said, but first, more randomized controlled trials are needed to show how the practices contribute to weight loss and glucose control. Hecht was the senior author on a recent study in Obesity that showed patients with mindfulness training achieved greater glycemic control than those without training, but variation among teachers made a difference. One instructor did poorly on student ratings compared with the other 2, and this instructor’s students lost less weight than those in the other 2 groups.13 “We’re trying approaches with our new work to see if we can get more consistent results,” he said in an interview. Before managed care would fund mindfulness, he said, “We have to ask, ‘How do we get the optimal results, consistently and reasonably?’“

In the short term, the best bet for healthcare dollars to cover yoga and mindfulness training may be through health savings accounts (HSAs). Both President Donald Trump and House Speaker Paul Ryan advocate support for HSAs in whatever legislation replaces the Affordable Care Act (ACA).15 Legislation will soon be reintroduced16 to allow HSAs to pay for physical activity, including yoga, according to Dani Mackey of Yoga Alliance, a nonprofit professional association.

Scientific literature increasingly references “mindfulness-based stress reduction,” or MBSR. Rebecca S. Crane, PhD, MA, director of the Centre for Mindfulness Research and Practice at Bangor University, Wales, United Kingdom, and her co-authors describe MSBR as “underpinned by a model of human experience, which addresses the causes of human distress and the pathways to relieving it.” MBSR seeks a “present-moment focus,” and engages participants in a “sustained, intensive training in mindfulness meditation practice, in an experiential, inquiry-based learning process and in exercises to develop understanding.”17

In 2016, researchers from Brown University in Providence, Rhode Island, found an association between mindfulness, glucose regulation, and diabetes. They measured dispositional or “everyday” mindfulness, which is a keen awareness of one’s thoughts, using the Mindful Attention Awareness Scale (MAAS) on 382 participants taking part in a broader health study. Those with high MAAS scores had 83% greater prevalence of good cardiovascular health, and were especially superior in BMI, physical activity, fasting glucose, and rates of smoking.18

Mindfulness doesn’t come naturally for many, so the next question is: Can it be taught? And if so, do health outcomes improve? Hecht’s work suggests the answer to both is “yes.” In the Obesity study, 194 adults with BMI ≥30 were randomized to participate in a 5.5-month diet and exercise program, with or without mindfulness training. Assessments were at baseline and at intervals of 3, 6, 12, and 18 months. While researchers did not find a significant difference in weight loss between the 2 groups, the fasting glucose levels in the mindfulness group were 3.1 mg/dL lower at 12 months, a difference that increased to 4.1 mg/dL at 18 months. At 12 months, the mindfulness arm also had lower triglycerides.13

The ACA’s focus on preventive care and wellness raised yoga’s profile with payers. But Forbes, a leading integrative yoga therapist, wasn’t convinced. Writing in the International Journal of Yoga Therapy (IJYT), she wrote that yoga’s benefits flow not from the instructor but from the practitioners’ embrace of it. Yoga and managed care, Forbes wrote, had fundamentally different ways of measuring success. Drawing on frustration from her days as a clinical psychologist, she said of managed care, “Is the breadth and depth of yoga therapy better served—and protected&mdash;by practicing outside its confines? Is there a middle ground between working with and working outside managed care that gives us the opportunity to do what we do best without compromising our values?”14

In that same issue of IJYT, author Scott Laurence, PhD, asked whether outcomes-based standards—which focus on results and not process&mdash;could help yoga find a place in health systems. New payment models, “are efficient, effective, and conform to both modern medical practices and to third-party reimbursement requirements,” he wrote. “Outcome-based approaches maintain the spirit and identity of the yogic approach to change and are, thus, superior to strictly evidence-based therapies.” “Outcome-based therapy,” Laurence wrote, “is a middle way between a reductionist, allopathic medical model approach and a free-wheeling, forever spontaneous philosophy that eschews research and evidence.”19

Pain medication brought Aetna CEO Mark T. Bertolini no relief after he suffered a devastating ski injury in 2004. More pills were not the answer, but yoga was. After studying with Gary Kraftsow of the American Viniyoga Institute (AVI), Bertolini brought the lessons to the workplace, launching a collaboration with AVI and Duke Integrative Medicine.21 Using its own employees, Aetna studied the effects of 2 programs: Mindfulness at Work and Viniyoga for Stress Reduction. Employees who took part saw health improvements across the board—they lowered triglycerides, blood glucose levels, low-density lipoprotein or “bad” cholesterol, blood pressure, and waist circumference.22

Since publishing the results in 2012, Aetna has expanded the Mindfulness at Work meditation program to all its employees. Aetna spokesman Ethan Slavin told EBDM™ that the payer has found:

• Participants are regaining 62 minutes per week of productivity

• A per-employee dollar return, just on productivity, of more than $3000.

Slavin said more than 13,000 employees have, so far, participated in the program. In 2014, participants who completed the program, and took a survey before and after participation, reported a 28% reduction in perceived stress level, 20% improvement in sleep quality, and a 19% reduction in pain level.

Calls for Healthcare to Change

Some experts reject the idea that yoga or meditation should change to fit healthcare—it’s the payers who should adapt, for the simple reason that the practices save money. Findings from an intervention called 3RP&mdash;for relaxation, response, and resiliency&mdash;found a 43% reduction in healthcare use among participants who took stress-reduction training at the Benson-Henry Institute for Mind Body Medicine at Massachusetts General Hospital (MGH) in Boston.23 The authors emphasize that stress management skills can be taught, and at a much lower cost than treating what stress does to the body.

Marlynn Wei, MD, JD, a psychiatrist and author of the forthcoming book, The Harvard Medical School Guide to Yoga,24 argues that yoga has the evidence, the cost-effectiveness, and the growing popularity to make it an effective part of preventive care.25

A 2016 study commissioned by Yoga Journal and the Yoga Alliance found that while $16 billion was spent each year on classes, clothing, and other costs, most prefer to practice at home (65%).5 Seasoned practitioners can practice effectively by themselves, but it takes time to learn yoga—and cost was the biggest concern in selecting a studio or gym to take classes for half the respondents.5

“Yoga is the most popular form of mind-body practice in America today,” Wei wrote in a blog post. “That means if yoga was made more affordable and accessible through health insurers, it’s likely many people will actually use this insurance benefit.”25 Mary Caffrey is the managing editor of Evidence-Based Diabetes Management.References 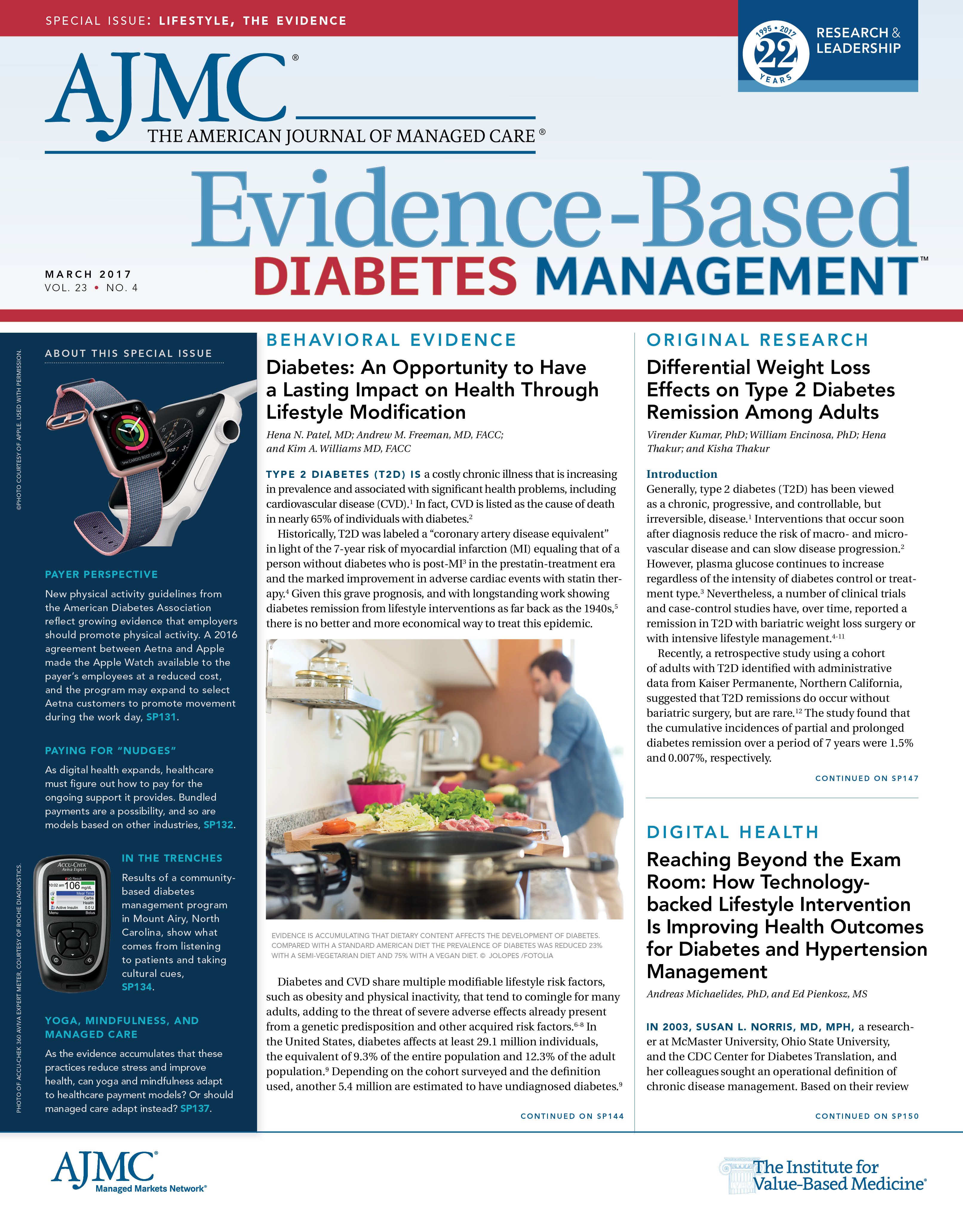 In this episode of Managed Care Cast, we speak with Sachin Jain, MD, MBA, SCAN Group and Health Plan's president and CEO, about how the organization made 10% of senior managers’ annual bonuses dependent on how well the gap in medication adherence among diverse populations was reduced.