Diagnostic Testing Is a Wild West of Unknowns, Perils

The timely panel took place just after FDA issued a report on why it feels regulatory oversight of testing is necessary.

The problem with FDA involve&shy;ment in the regulation of mo&shy;lecular diagnostics testing is not only the esoteric science behind them, but also rapid-fire developments that can make slow-moving FDA decisions irrelevant by the time they arrive.

That’s what a group of experts shared during a panel discussion dur&shy;ing the 4th annual meeting of Patient-Centered Oncology Care, held in Balti&shy;more, Maryland, by The American Journal of Managed Care.

“The FDA does not have a good way to solve for these challenges right now,” said Scott Gottlieb, MD, former FDA dep&shy;uty commissioner for medical and sci&shy;entific affairs. Gottlieb recalled that dur&shy;ing one period of HIV resistance testing, the FDA was looking at genomic tests and eventually would give an approval, but the tests would be obsolete before anybody could come in for testing. “Doc&shy;tors realized that these tests changed all the time. Genomics changed as the viruses mutated,” Gottlieb recalled.

The panel discussion was timely—it took place a few weeks after FDA re&shy;leased a report on why it feels more regulatory oversight of laboratory test&shy;ing is necessary, basing its conclusions on 20 case studies of problematic out&shy;comes. “Laboratory developed tests (LDTs) serve an increasingly important role in healthcare today. They also have become significantly more complex and higher risk, with several notable exam&shy;ples of inaccurate tests placing patients at otherwise avoidable risk,” the report stated in its executive summary.

With a plethora of commercial testing companies and academic laboratories involved in their development, physi&shy;cians and patients need clear guidance about what they are getting when they order these tests. However, the FDA still needs to make clear what role it plays as a review body—whether it will weigh in on clinical validity or clinical utility, the panelists said.

“The customers need to be confident that the product they’re getting and buying is something they can use to make an intelligent decision,” said Mi&shy;chael A. Kolodziej, MD, Aetna’s national medical director for oncology strategy. “A lot of people do not believe that is oc&shy;curring. When an oncologist orders the test, they have no idea where it’s going and whether it’s being done well. Pa&shy;tients would be horrified by that state&shy;ment. Payers do not have the expertise to look at all of these very complicated molecular tests. We need some kind of proficiency testing. Is the test being done right? That’s clinical validity.”

Nevertheless, genomic testing is well established by now. There are 155 bio&shy;markers listed on FDA drug labels, ac&shy;cording to session moderator Dennis P. Scanlon, PhD, professor of health policy and administration at Penn State Uni&shy;versity. “Fifty percent of all cancer treat&shy;ments in early clinical development rely on biomarker data,” he noted, and despite the problems associated with genomic testing, the value is indisput&shy;able. Women with breast cancer who undergo genetic testing of their tumor prior to treatment enjoy a 34% potential reduction in chemotherapy, he said.

Numerous other issues are associated with this form of diagnostics, includ&shy;ing establishing utility for patients, the panelists said. Tissue samples might sometimes be inadequate and a large percentage, upward of 30%, are re&shy;turned as unacceptable by laboratories; but also, matching tests with patients is a tricky business, and large numbers of tests are performed without true merit, panelists said.

“A key question comes back to what is the test designed to do, and are we selecting the right test?” said panelist Joy Larsen Haidle, MS, CGC, president of the National Society of Genetic Coun&shy;selors. “We may be getting an accurate result, but the test may not have been designed for that particular patient,” she said. “From the patient’s perspec&shy;tive, they have to be able to count on that result. It impacts not just them but their families, too.”

Another side of this problem is that biomarker testing is very prejudicial to large segments of the patient popula&shy;tion, meaning that especially when recruiting for clinical trials, it’s hard to assemble a patient cohort that meets the specific requirements of biomarker expression at the molecular level. “A drumbeat of trials that are failing is predicted because they haven’t been able to accumulate enough patients,” Scanlon said. “This incidence rate is re&shy;ally the elephant in the room. Various trials have already run into this issue.”

The US genomics testing market was estimated at $5.9 billion in 2011 by re&shy;search firm Booz Allen Hamilton, with nearly 2900 different tests available in that year. Subsequent research re&shy;leased in June by Grand View Research predicted that the genomics testing market just in the United States would hit $27.87 billion by 2022.1

With this scale of growth and mar&shy;keting in mind, the FDA has been work&shy;ing to develop a set of standards and processes to ensure that the tests are reliable. The agency is also working to develop clinical databases that will help physicians make better clinical decisions based on the test results.

“There are a lot of ways to make er&shy;rors in sequencing, and our concept is to develop a set of process and mate&shy;rial standards that will, we hope, allow us to essentially be confident that a lab that develops a test will do it in a man&shy;ner that generates a test that is accu&shy;rate and reliable,” Elizabeth Mansfield, PhD, director of personalized medicine for the FDA, said in an interview earlier this year.

In its report issued in November, the FDA stated that it examined events in&shy;volving 20 laboratory developed tests (LDT) “that illustrate, in the absence of compliance with FDA requirements, that these products may have caused or have caused actual harm to patients. In some cases, due to false-positive tests, patients were told they have con&shy;ditions they do not really have, causing unnecessary distress and resulting in unneeded treatment. In other cases, the LDTs were prone to false-negative results, in which patients’ life-threat&shy;ening diseases went undetected. As a result, patients failed to receive effec&shy;tive treatments.”2

“Other LDTs provided information with no proven relevance to the disease or condition for which they are intend&shy;ed for use, while still others are linked to treatments based on disproven sci&shy;entific concepts. In addition to patient harm, inaccurate or unreliable tests can be costly to society,” the report stated.2

While the FDA has taken a relatively passive role in oversight of LDT, the Clin&shy;ical Laboratory Improvement Amend&shy;ments (CLIA) from CMS do provide stan&shy;dards, and yet all of the problem tests discussed in the FDA report did follow CLIA recommendations, which contrib&shy;utes to the conclusion that CLIA may not be strong enough, the FDA said. It said CLIA fails to ensure safety and ef&shy;fectiveness of tests prior to marketing and that it makes no assessment of the quality and design of testing devices.

“Greater FDA oversight is needed to promote access to LDTs that provide benefits to patients and the health care system, while helping to ensure pa&shy;tients are not unduly exposed to harm,” the report concluded.

His thought was seconded by panelist Bruce Quinn, MD, PhD, MBA, senior di&shy;rector of FaegreBD Consulting in Wash&shy;ington, DC, who specializes in Medicare policy and health reform in innovation. “Professional societies are extremely important in determining where the cut points should be,” he said.

Whereas, confusion appears to reign in this burgeoning field of medical di&shy;agnostics, there is a rapidly growing presence of certified genetic counselors (CGCs) who function as in-betweens to directly guide patients toward informed use of genetic testing. They supplement the expertise of doctors for whom these diagnostics may outstrip their zone of competence, said Larsen- Haidle. There has been an 88% increase in CGCs since 2006, she added.

Their skills are brought to bear in a variety of forums, Larsen-Haidle said, among them face-to-face consulting, telephone and computer interaction, and rural settings. Genetic counselors can re&shy;duce costs to the healthcare system by reducing inappropriate testing, she said, adding that through their expertise and particular focus, they can detect genetic risk factors in patients whom referring providers may fail to detect. 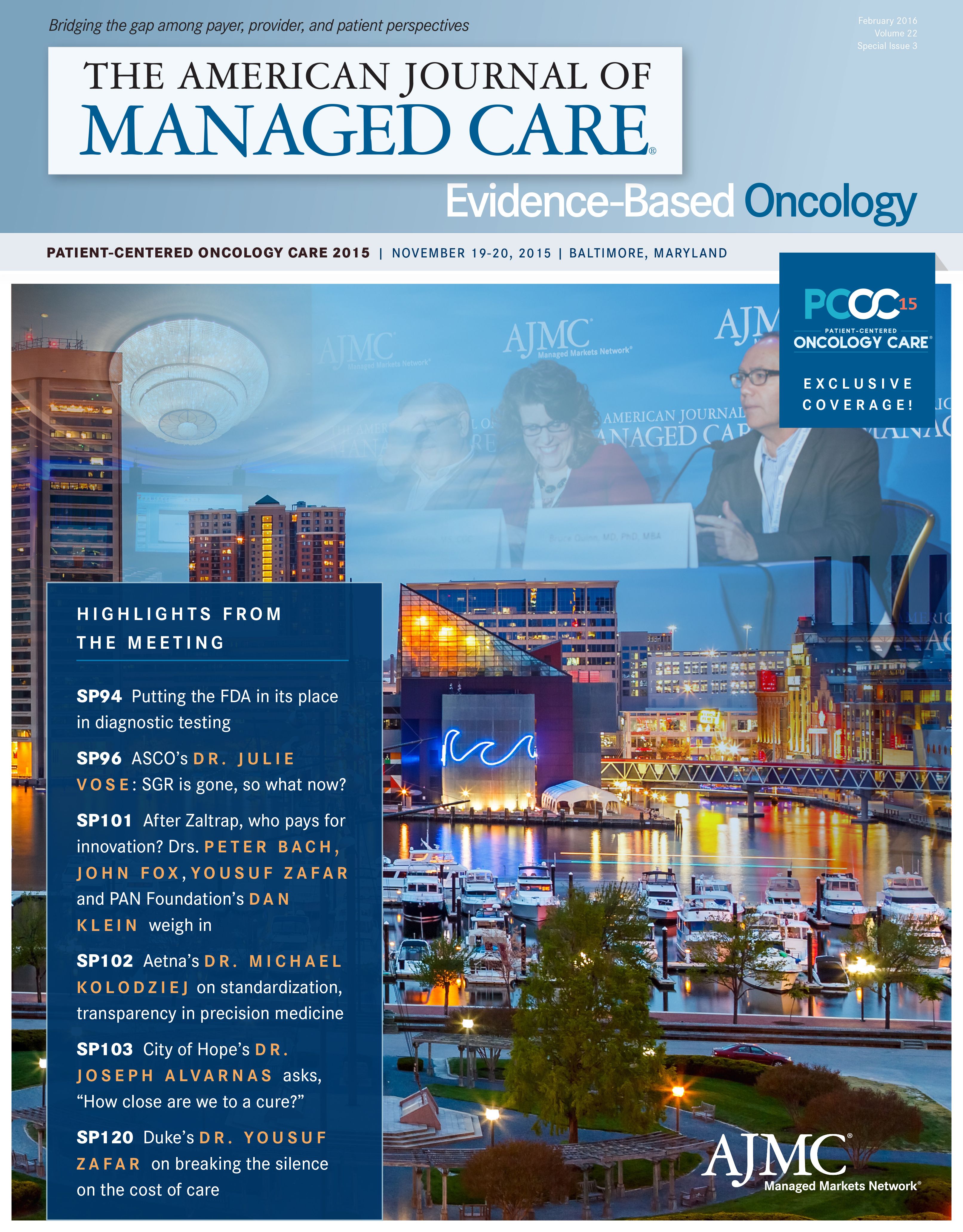