This study highlights disparities in care for diabetes and hypertension for individuals with serious mental illness compared with the general Medicaid and Medicare populations.

Methods: Existing quality measures for diabetes and hypertension from the Healthcare Effectiveness Data and Information Set (HEDIS) were adapted and applied to the SMI population for the 2012 calendar year. The rates of diabetes care and hypertension control for people with SMI were compared with national averages for Medicaid and Medicare managed care plans to examine disparities in care.

Results: Adults with SMI receive poor-quality care for diabetes and hypertension. Depending on the health plan, performance on the diabetes care and hypertension control HEDIS measures was 14 to 49 percentage points lower among the SMI population than the general Medicaid and Medicare populations.

Conclusions: Findings highlight disparities in care for individuals with SMI compared with the general Medicaid and Medicare populations. Health plans demonstrated substantial room for improvement on almost all diabetes and hypertension HEDIS measures for the SMI population.

Hypertension and diabetes have often progressed by the time they are identified in individuals with SMI,8 who are less likely to receive high-quality care for these diseases.8,9 Data from clinical trials and national epidemiological studies suggest that at least 30% of individuals with schizophrenia or bipolar disorder receive poor medication treatment for diabetes and 62% receive poor medication treatment for hypertension.8-10

Policy makers, health plans, and providers are learning that improving care quality and outcomes for the SMI population will require addressing chronic, comorbid physical health conditions.11-13 State Medicaid programs recognize that although only about 10% of Medicaid beneficiaries have SMI,14 their complex conditions make their care costly. Current programs and delivery system reforms promoting integration of primary and behavioral healthcare are promising. Many health plans are testing strategies for integrating and coordinating care for this population, with special attention on physical health.15-17

To examine variation in measure performance, we conducted outreach through health plan trade organizations and used a list of health plans maintained by the National Committee for Quality Assurance (NCQA) to recruit geographically diverse plans that serve different types of Medicaid populations. Three plans (1 each in the Northeast, Midwest, and West regions) participated: a Medicaid plan for disabled adults (Medicaid-Disabled Plan), a Medicaid plan for low-income adults (Medicaid-Adult Plan), and a Dual-Eligible Special Needs Plan (D-SNP) for individuals enrolled in Medicaid and Medicare (Medicaid & Medicare D-SNP). Plan enrollment ranged from 13,000 (Medicaid Adult, Medicaid & Medicare D-SNP plans) to 131,000 (Medicaid-Disabled Plan). All 3 plans were responsible for medical, pharmacy, and mental health benefits; had access to physical and behavioral health records; have been in business for at least 20 years, and offer lines of business other than the products in this study. Two of the 3 have NCQA accreditation.

We adapted 2012 Healthcare Effectiveness Data and Information Set (HEDIS) measures for diabetes and hypertension to apply to the SMI population (see Table 1 for measure descriptions). We asked plans to report on member use of ambulatory care: the percentage of members with SMI who had an ambulatory physical healthcare visit in 2012.

Data were collected in 2013. Health plans followed standard procedures for gathering data to report HEDIS measures (all plans annually report diabetes and hypertension measures to NCQA). To identify a sample of members eligible for each measure, each plan used claims/encounter data from calendar year 2012 to identify members with SMI, diabetes (2011 claims were also used for diabetes), and hypertension. Plans also used claims data to report rates of ambulatory physical healthcare.

Plan members were eligible if they: 1) were continuously enrolled from January 1 through December 31, 2012; 2) were 18 years or older during the same period; and 3) had at least 1 inpatient or 2 outpatient claims with a diagnosis of schizophrenia or bipolar disorder, or at least 1 inpatient claim with a diagnosis of major depression (previous studies included schizophrenia, bipolar, and major depression in the SMI population18,19; we required an inpatient stay for major depression to ensure that individuals included in the measure denominator had severe depression). Across plans, 884 members with SMI were identified (345 in Medicaid & Medicare D-SNP, 219 in Medicaid-Disabled, 320 in Medicaid-Adult). After identifying the entire SMI population, the plan assigned individuals into 2 denominator groups: 1) members who received at least 1 diabetes medication or had at least 1 claim for diabetes in 2011 or 2012 and 2) members diagnosed with hypertension in 2012.

Health plan staff manually reviewed members’ medical and behavioral health records (when available) for the same period. Two plans had access to electronic health records or other electronic systems and the third plan accessed hard copies of medical records from which they extracted information to calculate measures. Manual abstraction confirmed the hypertension diagnosis (to confirm eligibility for the measure denominator, per HEDIS specifications) and determined if the member received services consistent with the numerator requirement. Because behavioral health records provided little additional information, study results were based on medical records.

We used plan data to calculate the percentage of members with SMI and diabetes and/or hypertension who received care consistent with measure specifications. To analyze potential disparities, we compared the SMI population’s average rate with the general population’s average HEDIS Medicaid rate in 2012 for the 3 plans using data in Quality Compass 2013 with the permission of the NCQA. We also compared rates of diabetes care and hypertension control for members with SMI, with the HEDIS national averages for the same measures, which included roughly 180 Medicaid and 500 Medicare managed care plans.21

Variation in the receipt of ambulatory care across plans contributed to poor measure performance. In the Medicaid & Medicare D-SNP and Medicaid-Disabled plans, members with at least 1 ambulatory visit in 2012 ranged from 88% to 99% for the diabetes and hypertension groups, respectively. In contrast, in the Medicaid-Adult plan (which had the worst performance on all measures), 19% of members with diabetes and 15% with hypertension had at least 1 ambulatory visit in 2012. The lower performance of this plan was driven in part by less utilization of ambulatory care and, therefore, fewer opportunities to monitor care.

Health plans play an important role in delivering care for the SMI population. Physical and behavioral healthcare providers often deliver care in fragmented systems, limiting their ability to ensure that individuals with SMI receive comprehensive care. In contrast, health plans are positioned to use data to monitor delivery of care across providers and to intervene for members who are not receiving adequate care. The results of this pilot study suggest that individuals with SMI enrolled in Medicaid and Medicare plans receive poor care for diabetes and hypertension compared with the general Medicaid and Medicare managed care populations. We found wide variation in plan performance for the SMI population. With the exception of 1 measure (eye exam for diabetes), the Medicaid & Medicare D-SNP had the highest performance across measures.

Although it is difficult to draw broad conclusions from only 3 health plans, performance variations may reflect differences in plan capacity to manage care for this population. Medicaid & Medicare D-SNPs are designed to coordinate care for dual-eligible populations with complex health conditions. At least 1 other study found that dual-eligible enrollees were more likely to receive diabetes testing than Medicaid-only enrollees.22 Performance differences could reflect that health plans serve different populations and operate in different state contexts, in terms of service systems and available community resources. Utilization of ambulatory care corresponded to measure performance, suggesting that getting people into care is key to managing conditions. Health plans may identify individuals with SMI who are at risk for poor outcomes simply by monitoring the use of ambulatory physical healthcare.

Previous studies using claims data, clinical registries, and information collected at mental health clinics have found poor management of diabetes and hypertension among the SMI population.10,22,23 This study’s findings provide a snapshot of the quality of care for individuals with SMI who are enrolled in comprehensive health plans, using data collected from health records. This study also used common measures for diabetes and hypertension care for direct comparison with care quality for the general plan population. Although these plans were responsible for physical and behavioral health benefits, individuals with SMI had poor management of diabetes and hypertension. Given the side effects of psychiatric medications, providers should routinely monitor the comorbid medical conditions of SMI populations.

This pilot study was limited to health plans, and the sample size for each plan was modest due to variation in the prevalence of members with SMI and diabetes or hypertension. As other plans use these or similar measures, it will be important to compare their performance with this study’s findings and to examine sources of performance variations.

This study highlights disparities in care for diabetes and hypertension for individuals with SMI who are enrolled in Medicaid and Medicare managed care plans. Although health plans demonstrated variation in measure performance, the average on most indicators was much lower for the SMI population than for the general population. Measures developed for this study fill critical gaps in quality measurement for the SMI population. Following pilot testing, they were endorsed by the National Quality Forum and are now available for health plans, state agencies, and other organizations to monitor quality of care for the SMI population. They may also be useful for ongoing healthcare delivery system demonstrations and reforms toward improving care for this population.

Source of Funding: The authors conducted this work under contract to the Office of the Assistant Secretary for Planning and Evaluation (ASPE), US Department of Health and Human Services (HHS) (HHSP23320100019WI, HHSP23337001T). Funding was provided by the Substance Abuse and Mental Health Services Administration (SAMHSA), HHS. Views and opinions expressed are those of the authors and do not necessarily reflect the views, opinions, or policies of ASPE, SAMHSA, or HHS.

Author Disclosures: Drs Liu and Scholle, Ms Morton, Mr Patel, and Ms Lewis, work for National Committee for Quality Assurance, a nonprofit organization that develops and maintains quality measures. The authors report no relationship or financial interest with any entity that would pose a conflict of interest with the subject matter of this article. 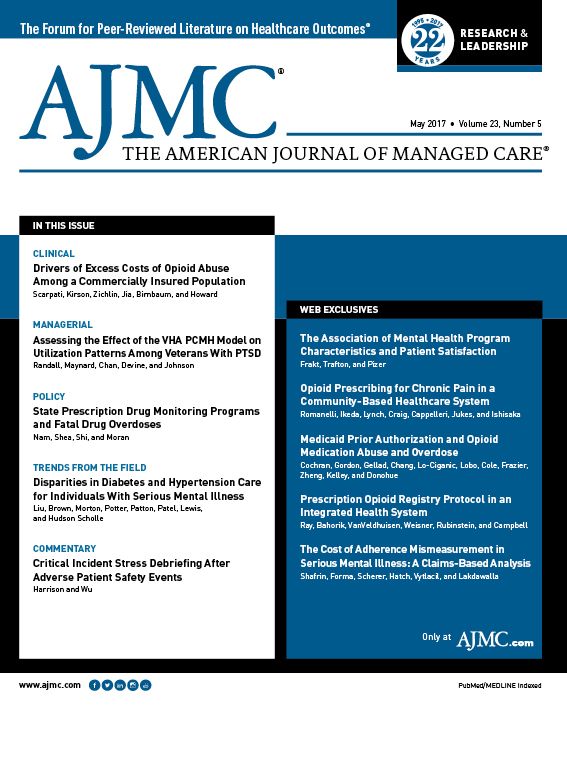