Financial burden is a potential nonclinical adverse event in cancer patients. As patients, especially those in the lower income ranges and the middle class, struggle to meet their medical bills, the likelihood of them skipping doses or doctor’s visits is quite high.

Cost sharing has been identified as a significant burden on patients, often being a barrier that prevents individuals from seeking much needed care. With this realization, the Affordable Care Act (ACA) made provisions to both ensure coverage and create a ceiling for maximum out-of-pocket (OOP) spending for patients.

The ACA limits the total annual spending of an individual or a family on medical care by forcing all health plans in the individual and group markets to have maximum OOP limits.1 Once the OOP maximum has been reached, the health plan has to absorb the cost of all in-network care that the enrollees seek. The value of these efforts have been realized by several organizations, including America’s Health Insurance Plans (or AHIP), a trade organization of health insurance companies; the American Cancer Society; the American Heart Association, and the Center on Budget and Policy Priorities.1

Healthcare coverage policies can create roadblocks for patients to access much needed care, especially in oncology; this has been shown in both the Medicare and commercially insured populations. A study published by Dusetzina and colleagues found that in 2012, Medicare, on average, reimbursed less than 40% of charges for chemotherapy while private insurance shared a little over 55% of the enrollee’s costs. Overall, one-third of chemotherapy agents that the authors examined were reimbursed at higher rates by commercial health plans.2

Further, service charges vary widely depending on the medication being administered. As Dusetzina and colleagues found out, the range was $59 per infusion (for 500 mg of fluorouracil) to $9225 per infusion (for 10 mg of bevacizumab). Additionally, charges varied for the same drug depending on the provider; for example, a patient could be charged anywhere between $3889 and $6675 for a single infusion of trastuzumab. The source of this data was Medicare and large employer-sponsored private plans.2

Privately insured patients, at least in the population studied by Dusetzina’s team, had the least OOP responsibility across all chemotherapy agents and across all visit types. Uninsured patients, on the other hand, faced bills that could be as much as 43 times the Medicare allowed amount.

Financial burden is a potential nonclinical adverse event in cancer patients. As patients, especially those in the lower income ranges and the middle class, struggle to meet their medical bills, the likelihood of them skipping doses or doctor’s visits is quite high. The impact, of course, is on clinical outcomes, be it disease progression or survival. And this has been documented.

A study published in Cancer Medicine reported that insurance status was a primary predictor of 5-year cause-specific survival among 18-to-64-year-old patients diagnosed with one of 7 cancer types in New Jersey.4 These 7 cancers—breast, colorectal cancer (CRC), lung cancer, non-Hodgkin lymphoma (NHL), prostate cancer, bladder cancer, and cervical cancer&mdash;accounted for 61% of incident cancers and 56% of cancer deaths in New Jersey between 2005 and 2009.

Retrospective analysis of the data, which was drawn from the New Jersey State Cancer Registry, showed that among individuals diagnosed with breast, CRC, lung, NHL, and prostate cancer, those who were uninsured or enrolled in Medicaid had a much higher risk of death than those who had private insurance coverage. Overall, patients diagnosed with any of the 7 cancers had a 41% to 97% higher risk of dying within 5 years of diagnosis if uninsured compared with privately insured. Medicaid-insured patients in the cohort (except those with bladder cancer) had a 21% to 198% risk of dying within 5 years of diagnosis compared with privately insured.4

The authors attribute their findings to several factors:

A broader national study retrospectively analyzed data collected between 2007 and 2010 from the SEER database, which is maintained by the National Cancer Institute. The researchers analyzed data on 473,722 patients—from the same age group as the above cohort (aged 18 to 64 years)&mdash;who were diagnosed with one of 10 cancers (breast, prostate, lung, CRC, head and neck, NHL, liver, pancreatic, ovarian, or esophageal). The primary outcome of interest was to determine the association of the patient’s insurance status with disease stage at presentation, treatment received, and survival.5

Insurance status of the patients was defined as non-Medicaid insurance (insured/no specifics), Medicaid insured, or uninsured. The SEER definition of insured includes those with private insurance, Medicare, and coverage from the military or Veterans Affairs when initially diagnosed and/or treated. However, since the authors restricted the current study to those under 64 years, that eliminated the Medicare-eligible population.

IS MEDICAID EXPANSION THE ANSWER?

The fact that patients with non-Medicaid insurance presented with more localized disease meant that their disease might still be responsive to treatment and yield better outcomes. Further, the uninsured who presented with a more advanced stage disease were less likely to receive cancer-directed surgery and radiation treatment, and had worse survival as a result.

The question here is whether Medicaid expansion, one of the biggest undertakings of the ACA, might help reduce this disparity in the long term. As of July 11, 2016, only 26 states were reported to have made the decision to expand Medicaid, 6 states were using an alternative to traditional expansion,6 and governors of other states, such as Oklahoma,7 have realized the importance of participating in the expansion.

Politics aside, we need more long-term sustainable policies to reduce these discrepancies that are rampant across healthcare. Policies to reduce patient burden through a limit on OOP spending, greater transparency on service charges, and coverage plans that do not discriminate based on a patient’s insurance status could be potential solutions. 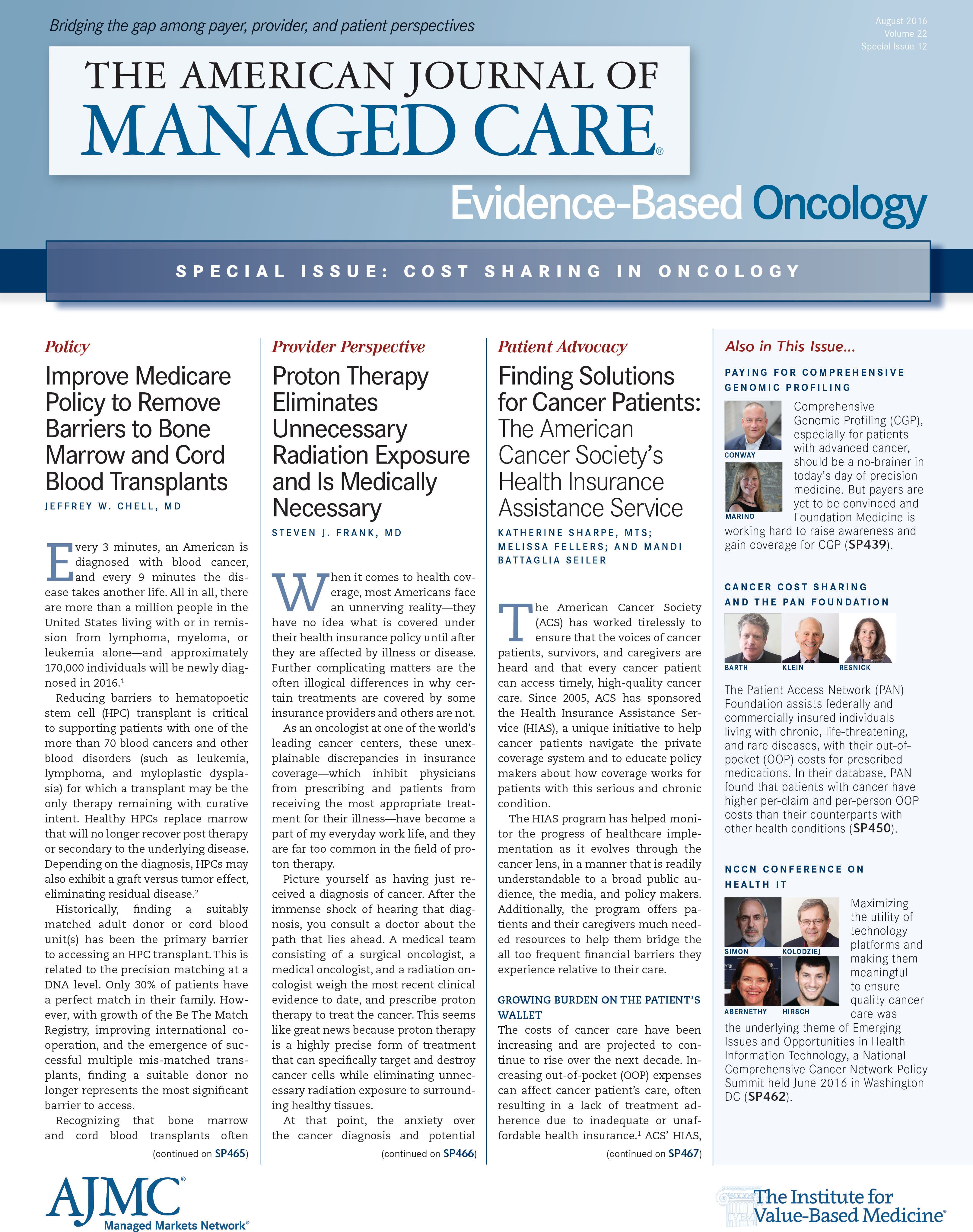