Drug Adherence After Price Changes in a Previously Compliant Population

The impact of price changes in drugs, at least among previously adherent patients, was modest in size except for drugs with large price changes.

The cause(s) of suboptimal medication adherence in patients with chronic disease has been the subject of intense investigation.1 Reducing medication costs in order to improve patient adherence is common practice in value-based insurance design,2 however, absolute price reduction may have a marginal effect on overall adherence due to the large effects of non-economic factors.3

To further explore, we report data from a natural experiment in a manufacturing workforce in which the imposition of marginal costs to otherwise rich and uniform drug benefits4 were staggered. As part of an overall assessment of the change, we use a difference-in-difference approach to evaluate the impact of price changes for 4 classes of drugs (angiotensin-converting enzyme inhibitors/angiotensin receptor blockers [ACEIs/ARBs], beta-blockers, statins, asthma controllers) among 2573 employees who had regularly filled prescriptions for at least 1 year prior to the benefit change (medication possession ratio >.80).

On January 1, 2004, one-third of the workforce—on average slightly younger, less well paid, and more likely female&mdash;were switched (based on plant location and worktype) from a small fixed copay to a coinsurance benefit with graded copays for generics (5% to 10%), brands with no generic option (20%), and choice brands (50%); the remaining workers experienced no year-to-year benefit change because of preexisting labor agreements. The shows the out-of-pocket costs and medication adherence across the 2 years for this previously adherent group; the reported P values are for the difference-in-difference change between those with the new benefit versus no change in benefit. As shown, there was a disproportionate decline in adherence in all 4 drug classes, including the 2 where the out-of-pocket costs actually declined because of the coinsurance, possibly due to cross-price effects including the higher cost for outpatient visits which resulted in 11% to 17% less ambulatory utilization in the intervention group.5

Multivariate analysis, adjusting for prior adherence, age, gender, income, race, and sex, shows an overall intervention effect of —.013 (P <.05) or a 1.3% decline in overall medication adherence across classes. Elasticity of demand was about —.002 per $10/year change (P <.001), in the range of a 2% to 3% decline for the more expensive drug classes, similar to that reported by Choudhry.3 Both effects were not included in the same model because of colinearity.

Overall the negative impact of the price change, at least among these previously adherent patients, was consistent with expectations but modest in absolute size for all classes except asthma controllers, the group that changed most in price. Although our multivariate model (data not presented) did not confirm either effect, we cannot exclude steeper consequences of price change among the less affluent, nor the possibility of interactions between price and other factors among those previously less adherent. The health impacts of these unintended consequences of design change among stably employed privately insured workers merits careful observation as the transition to higher marginal cost insurance schemes continues. 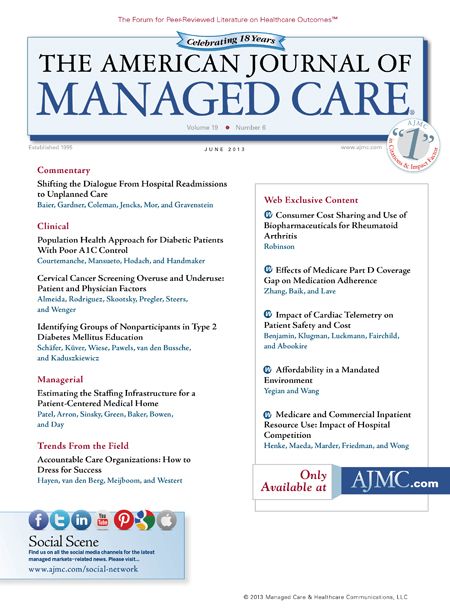