Equalize Payment Across Site of Service

For many US community cancer centers, keeping the doors open has often meant making the difficult decision to consolidate with hospitals and large hospital systems. Site neutrality is a critical step in the journey toward better healthcare for all Americans and a healthy future for Medicare.

Improving Medicare quality and efficiency, in order to keep the program solvent for the nearly 10,000 new beneficiaries who turn 65 years old each day,1 has been an ongoing priority for Congress and policy makers. Efforts to improve patient safety and outcomes, while tying payments to quality instead of quantity, have resulted in a seismic shift in the delivery of healthcare.

Yet amid these major changes and cost-cutting improvements, we still see examples of questionable and costly policies that undercut the progress being made elsewhere.

A striking example, with which cancer care providers are all too familiar, is the ongoing payment disparity between cancer care provided in community settings and that same care provided in hospital outpatient departments (HOPDs). Medicare policy today still allows for significantly higher reimbursements for essential healthcare services provided by HOPDs than for the same service or treatment administered in a physician’s office.

When the specific service is not dependent on the hospital facility’s associated technologies, and in the absence of any evidence-based rationale, paying more for a service in the hospital is wasteful, costly, and endangers patient access and choice.

A decade ago, nearly 90% of Americans being treated for cancer had many options for care in the community setting, but changes in reimbursement methodologies have made the previous landscape almost unrecognizable. Today, fewer than 65% of patients receive care in these centers, while HOPDs saw a 150% increase in patient volume in just 6 years.2 And alarmingly, while hospitals reaped more than triple their previous reimbursement amounts (from $90 million to $300 million from 2005 to 2011), many freestanding cancer centers nationwide have been forced to close their doors. Indeed, a survey of oncology practices found 544 practices have been acquired by hospital systems and 149 have merged with other practices, in addition to 313 community oncology treatment clinics that have closed since 2008.2

For many US community cancer centers, keeping the doors open has often meant making the difficult decision to consolidate with hospitals and large hospital systems. Although this gambit allows an individual practice to survive, these consolidations due to payment disparities increase total Medicare costs and ultimately affect the patient by increasing out-of-pocket expenses and limiting patient choice. A recent study of the medical records of 4.5 million patients published in JAMA concluded that expenditures per patient were 10.3% higher for physician groups owned by hospitals than for independent practices, and expenditures were 19.8% higher for physician groups owned by multihospital systems.3

A 2015 study by the IMS Institute also concluded that Americans are paying higher prices for cancer treatments because of these acquisitions. According to the report, reimbursement levels for drug administration costs in hospital outpatient facilities average 189% higher than physician office reimbursement costs for commercially insured patients under the age of 65 years. In 2014, Medicare paid HOPDs twice as much as a physician’s offices for the same drug administration service.4 The pain in the pocketbook doesn’t end there: a report by the Milliman research group concluded that Medicare beneficiaries pay $650 more in out-of-pocket co-payments when cancer care is delivered in the hospital setting as opposed to a physician’s office.5

The US healthcare system today is unquestionably complex, with a great many variables affecting the cost of care. However, some problems are easier to fix than others, and this one has a common sense solution: to have policy makers neutralize payments across sites of service and pay the same fee for the same service regardless of where it is performed.

Siteneutral payment reform is not only common sense—it is also already widely supported.

In his 2016 budget proposal, President Obama outlined an estimated savings of $29.5 billion over 10 years, achievable by improving incentives for providing ambulatory care in the most appropriate clinical setting. The proposal would effectively lower payment for services provided by off-campus HOPDs under the Outpatient Prospective Payment System, to either the Medicare Physician Fee Schedule—based rate or the rate for surgical procedures covered under the Ambulatory Surgical Center payment system.6 Likewise, the Medicare Payment Advisory Commission (MedPAC) has repeatedly advocated that “site-neutral payments that base the payment rate on the less costly sector can save money for Medicare, reduce cost sharing for beneficiaries, and reduce the incentive to provide services in the higher paid sector, without compromising beneficiary access to care or health outcomes.”

Consumer groups agree. The AARP supports equalizing Medicare payments for physician services between hospital outpatient and office settings, believing that this will save billions in taxpayer dollars.

Improving and safeguarding Medicare is undeniably a tremendously difficult process, but one that our elected officials have committed themselves to undertaking. Site neutrality is a critical step in the journey toward better healthcare for all Americans and a healthy future for Medicare. Barry Brooks, MD, is chairman of the Pharmacy & Therapeutics Committee for The US Oncology Network.References 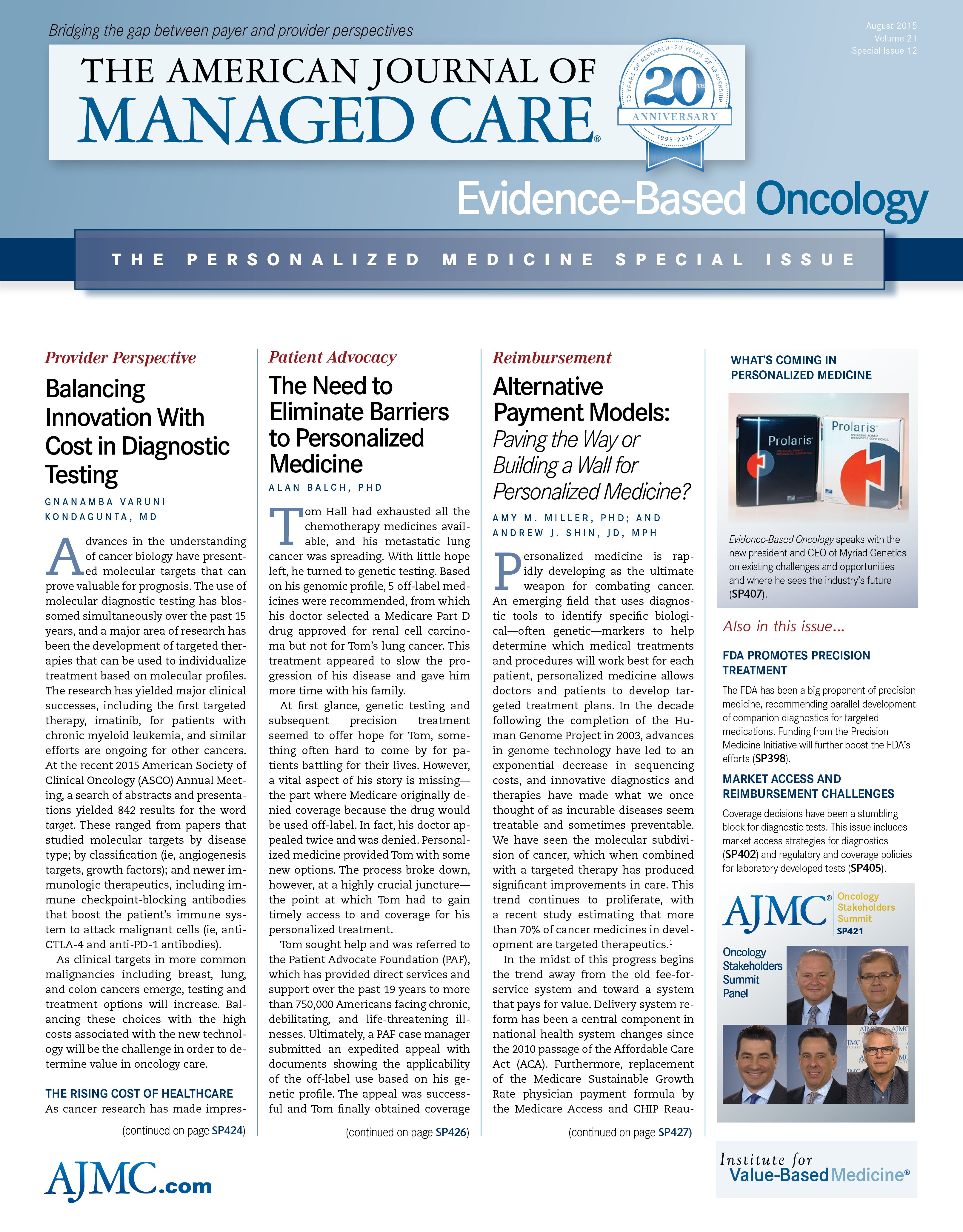 GAO: Congress Must End Incentives to Prescribe More Expensive Drugs Through 340B Program
Chemoprevention With Oral Contraceptives Could Be a Reality
Massive Consolidation Among Healthcare Payers
Gefitinib Approved as Frontline in EGFR-Positive NSCLC
Need for Palliative Care for Improved Performance at the End of Life
CHAARTED Study: Conceptual Shift in Early Prostate Cancer Treatment
Sonidegib Approved for Basal Cell Carcinoma
The Diagnosis for Diagnostics: Changes to Medicare Payment and Coverage of Clinical Laboratory Tests
No Solution in Sight Yet With the Federal 340B Program, Say Stakeholders
The Need to Eliminate Barriers to Personalized Medicine
Myriad's New CEO Discusses Promise, Challenges of Changing Times in Genetic Testing
The Vision of an Effective and Equitable Future for Personalized Medicine
Personalized Medicine: On the Brink of Revolutionizing Cancer Care
Equalize Payment Across Site of Service
Alternative Payment Models: Paving the Way or Building a Wall for Personalized Medicine?
Related Videos
Related Content

On this episode of Managed Care Cast, we speak with Tom Stanis, CEO and cofounder of Story Health, and Phillip Wood, Intermountain Ventures program director, on how their partnership came about, how it is going so far, and the future of their collaboration.

Data released in the CDC’s latest Morbidity and Mortality Weekly Report indicate that patients with end-stage kidney disease on hemodialysis who are Black, Hispanic/Latino, or of lower socioeconomic status (SES) are at greater risk of Staphylococcus aureus bloodstream infections, with Hispanic/Latino ethnicity cited as an independent risk factor.

Even patients with the mildest symptoms of myasthenia gravis said they experienced negative quality-of-life (QOL) effects from the disease.

The modified Atkins diet exhibited superior tolerability and effectiveness in reducing seizure frequency compared with other dietary therapies in the management of childhood drug-resistant epilepsy.