Among Medicaid beneficiaries, having more fragmented ambulatory care was associated with a modest independent increase in the hazard of a subsequent emergency department visit.

Objectives: Results of previous studies of Medicare beneficiaries have shown that more fragmented ambulatory care is associated with more emergency department (ED) visits and hospital admissions. Whether this observation is generalizable to Medicaid beneficiaries is unknown.

Study Design: We conducted a 3-year retrospective cohort study in the 7-county Hudson Valley region of New York. We included 19,330 adult Medicaid beneficiaries who were continuously enrolled, were attributed to a primary care provider, and had 4 or more ambulatory visits in the baseline year.

Conclusions: Among Medicaid beneficiaries, having more fragmented care was associated with a modest increase in the hazard of an ED visit, independent of chronic conditions. Fragmented ambulatory care may be modifiable and may represent a novel target for improvement.

Having highly fragmented ambulatory care, which is care spread across multiple providers without a dominant provider, has been associated with higher rates of emergency department (ED) visits and hospital admissions among Medicare beneficiaries.1,2 When patients have fragmented care, it is often difficult for providers to communicate adequately with each other, and adverse events may follow.3,4 However, patterns observed in Medicare may not be generalizable to other populations.5

The goal of this study was to determine if more fragmented ambulatory care is independently associated with more ED visits and hospital admissions, compared with less fragmented care, among Medicaid beneficiaries. We specifically sought to explore this issue while teasing apart the pattern of ambulatory care from the number of chronic conditions, because having fragmented care may affect patients differently depending on how many chronic conditions they have.6

The issue of fragmentation has become increasingly important with the emergence of value-based purchasing, which requires that providers become newly responsible for all of a patient’s care, not just care that they themselves provide.7 In this context, understanding fragmentation and its consequences becomes essential for effective population health management. Thus, the rationale for this study is to generate data-driven insights that can inform the design of future interventions to improve care patterns and outcomes.

We conducted a retrospective cohort study (2010-2012) of adult Medicaid beneficiaries who received care from physicians in the Hudson Valley region of New York to determine associations between fragmented ambulatory care and subsequent ED visits and hospital admissions. The Institutional Review Board of Weill Cornell Medicine approved the protocol.

The Hudson Valley region consists of 7 counties (Dutchess, Orange, Putnam, Rockland, Sullivan, Ulster, and Westchester) immediately north of New York, New York. At the time of the study, most healthcare in the region was delivered by physicians in small- and medium-sized private practices, using fee-for-service (FFS) reimbursement from multiple payers.8

We first identified primary care physicians (PCPs; general internists and family medicine physicians) in the claims who had billing zip codes in the Hudson Valley region. We determined which Medicaid beneficiaries 18 years and older could be attributed to those PCPs, based on 2010 claims, using previously defined attribution logic.9 Ambulatory visits were defined by CPT codes, using a modified version of the definition from the National Committee for Quality Assurance (NCQA).10 Modifications restricted the definition to evaluation and management visits for adults in an office setting, excluding management-only visits (eg, dialysis, chemotherapy, and physical therapy) and non—office-based visits (eg, home visits and visits in nursing facilities). This definition excluded ED visits.

We excluded those who were not continuously enrolled in the baseline year, and we excluded beneficiaries with outlier observations (>99.9th percentile) for number of visits or number of unique providers, as those observations may have been erroneous. Next, we restricted the cohort to those with 4 or more visits in the baseline year, because calculating fragmentation with fewer visits can lead to statistically unstable estimates.2 We required that beneficiaries be continuously enrolled in Medicaid for at least 1 more consecutive year, contributing data for 2 (2010-2011) or 3 (2010-2012) years. We excluded those who were in the hospital on January 1, 2011, because they were not at risk for an ED visit or hospital admission at the start of follow-up. We also excluded any beneficiary with a claim for pregnancy and/or labor and delivery during the follow-up period, because ED visits and hospitalizations for those patients are expected.

Independent variable. We measured fragmentation with the Bice-Boxerman Index (BBI) (eAppendix A [eAppendices available at ajmc.com]),11 a previously validated measure.1,2,6,12,13 Raw BBI scores range from 0 (each visit with a different provider) to 1 (each visit with the same provider). Intermediate scores reflect other patterns of care, with worse scores given to patterns with high dispersion (many providers) and low density (a relatively low proportion of visits by each provider). We transformed raw scores by reversing the direction (1 minus BBI score), so that higher scores reflect more fragmentation.

Descriptive statistics. We calculated descriptive statistics for the study sample in the baseline year regarding the number of ambulatory visits, number of unique providers, proportion of visits with the most frequently seen ambulatory provider, and fragmentation scores. We tabulated the specialty codes for the providers who were most often the beneficiaries’ most frequently seen provider and determined the proportion of those who were PCPs. We also determined the proportions of beneficiaries who had at least 1 ED visit and, separately, at least 1 hospital admission during the follow-up period, overall and stratified by number of chronic conditions.

Statistical models. We used Cox proportional hazards models for our analysis. Because fragmentation can change over time and because the hypothesized consequences of fragmented care may unfold relatively quickly, our models also treated fragmentation as time-dependent. We first calculated fragmentation using claims from the first 12 months (calendar year 2010) and then determined whether the beneficiary had an ED visit in month 13 (January 2011) or not. We then moved this window of observation by 1 month, recalculating the model using fragmentation in months 2 through 13 as a potential predictor of an ED visit in month 14, and so on. If the number of ambulatory visits in any 12-month window fell below 4 (making it difficult to calculate fragmentation scores), we carried forward the last fragmentation score that was based on 4 or more visits. We used the same approach in separate models predicting hospital admissions.

Cox models were thus used to determine the association between fragmentation score (as a continuous variable) and the hazard of an ED visit (or hospital admission), adjusting for age, gender, and number of chronic conditions (as a categorical variable). We conducted sensitivity analyses adjusting for Charlson-Deyo Index scores instead of the number of chronic conditions.

In order to estimate excess events associated with high fragmentation, a supplementary analysis was conducted in which the index was dichotomized, with scores of 0.7 or greater defined as high scores. A generalized estimating equation model, with Poisson distribution and log link function, was used to calculate the attributable risk for high fragmentation, using the dichotomized fragmentation score and a fixed baseline exposure, adjusting for age, gender, and comorbidity.17

We identified 94,139 adult Medicaid beneficiaries who had at least 1 ambulatory visit with a provider in the Hudson Valley region in 2010 (Figure). Of those, 75,005 (79.7%) were continuously enrolled that year. Of those, 32,402 (43.2%) could be attributed to a PCP. Our final sample was composed of the 19,330 beneficiaries (59.7%) who did not have outlier observations for numbers of visits or providers, had 4 or more visits, had continuous enrollment for at least 1 more consecutive year, were not hospitalized on the first day of follow-up, and were not pregnant during follow-up (Figure).

In this study of 19,330 Medicaid beneficiaries, having more fragmented care was associated with a modest 1.7% increase in the adjusted hazard of an ED visit, independent of the number or severity of chronic conditions. The hazard of a hospital admission was strongly associated with the number and severity of chronic conditions; having highly fragmented care did not increase this hazard further.

If we convert the excess risk calculated in the supplementary analysis to an absolute count of excess ED visits, the analysis shows that for every 71 patients with high fragmentation, there is a risk of 1 additional ED visit. This is equivalent to approximately 177 ED visits attributable to high fragmentation in our sample. Because the median charge for an ED visit nationally is $1233, this could account for an estimated $200,000 in excess ED expenditures in our sample of approximately 19,000 beneficiaries.18

This study has several limitations. It is observational, and we cannot rule out unmeasured confounding. We do not measure communication among providers, and not all fragmented care should be interpreted as uncoordinated care. We also cannot determine the medical appropriateness of the patterns observed. Finally, this analysis took place in 1 region, which may not be generalizable, although the multipayer, multiprovider characteristics of this region are found in other communities.

The results of this study have several implications. As reimbursement in Medicaid shifts from FFS to value-based purchasing,22 providers need new strategies for managing the quality and cost of care for populations of beneficiaries. Measuring fragmentation in the ambulatory setting creates the possibility of identifying patients with highly fragmented care and intervening to avert preventable ED visits. An example of an intervention that could reduce fragmentation is the creation of alerts in electronic health records to notify providers in real time if they are seeing patients who have highly fragmented care.23 This kind of intervention has been developed for a pediatric population in a single clinic23 but not yet for an adult population across multiple sites of care. Other types of interventions could be designed at the patient level (eg, educational interventions on the potential harms of fragmented care), practice level (eg, changes in scheduling systems to decrease the extent of cross-coverage), and payer level (eg, providing financial incentives that reward success in decreasing fragmentation). Future studies could test the effectiveness of such interventions in terms of their impact on ambulatory fragmentation and subsequent outcomes (eg, ED visits). 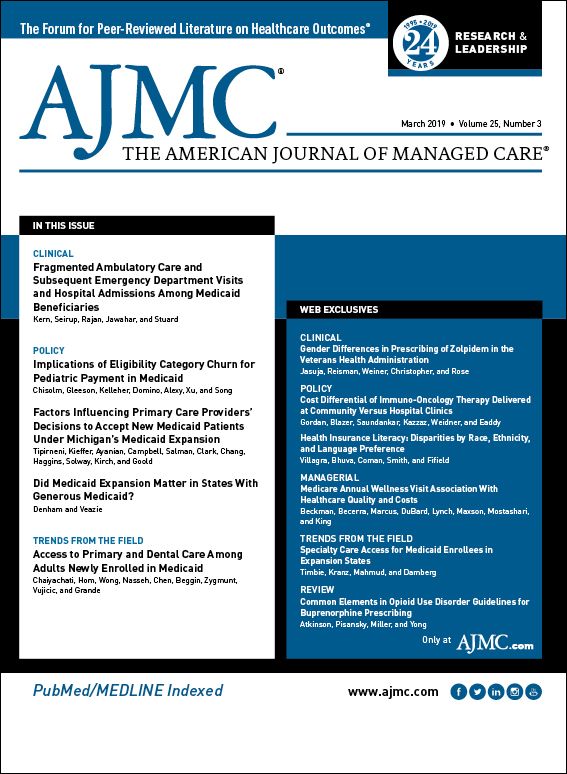