In Oncology, Navigating PBMs Starts With Knowing What’s in the Contract

Vertical integration of payers and pharmacy benefit managers (PBMs) took flight with the mergers of Aetna and CVS Health and of Cigna and ExpressScripts. Panelists at Patient-Centered Oncology Care® said the shift has filtered down to affect access at the practice level.

Vertical integration of payers and pharmacy benefit managers (PBMs) strengthens the hand of both when negotiating prices for oncology therapies with manufacturers. However, it also creates a labyrinth for providers to navigate when trying to understand payment terms, set up dispensing privileges, or gain prior authorization for an individual patient’s therapy.

None of it is easy, especially as PBMs constantly shift their routes for collecting revenue, said experts convened for a panel discussion during Patient-Centered Oncology Care®. Led by moderator and co-chair Kashyap Patel, MD, chief executive officer of the Carolina Blood and Cancer Care Associates of Rock Hill, South Carolina, the panelists included:

Vertical integration took flight with the mergers of Aetna and CVS Health and of Cigna and ExpressScripts. The speakers said the shift has filtered down to affect access at the practice level.

Dresser said his practice focuses on helping clients understand how they are affected by decisions from these “integrated health care conglomerates.” The changes in PBM structure, he said, have offered both challenges and opportunities, such as value-based contracting.

“What are things that these providers can do to better position themselves in the marketplace, to better be able to contend with these behemoths?”

At long last, Mortier said, Congress is taking note of how PBM-payer integration has put control in the hands of a few.

Mortier, who counts the Community Oncology Alliance among his clients, said oncology is just one of many specialties affected by the ability of these entities to dictate terms and affect patient care. “Unfortunately, that seems to be accelerating with a number of policies that are starting to interfere between the physician’s ability to prescribe medications and in some of the other roles that are that are going on,” he said.

Coleman, whose career in South Carolina state government touched on many aspects of health care, said dealing with PBMs is just one of the many issues on a busy provider’s plate. When dealing with PBMs, “You first have to make sure that you are armed with accurate information,” she said.

The panel emphasized the importance of understanding what’s in the contract with the PBM—and Coleman said it may not be easy for providers to get that information. This can involve everything from reimbursement agreements to the ability of oncology practices to dispense their own medications—the latter being a source of many recent disputes.

Coleman and Patel discussed a matter involving his practice. “We had to escalate to levels…to get someone to actually help us fi nd contractual language, because they were not going to give us the language that was Dr Patel’s on contracts,” Coleman said.

In oncology, these disagreements are a matter of life and death, Patel said. “At the end of the day, what I see is that I want to dispense my patient medicine for a life-threatening illness, and, sometimes, it can take up to 6 weeks. It just gets lost in the black hole.”

Mortier said that these practices are hitting Congress’ radar. “If you went up to Capitol Hill even 5 years ago and asked members of Congress what a PBM is or does, you wouldn’t get a lot of answers,” he said. “I think you’ve really seen oversight, hearings—some rational hearings…This isn’t a 1-party issue.”

Congress, Mortier said, is starting to dig into the lack of transparency surrounding PBM operations, as well as their strategies.

The sudden rise of direct and indirect renumeration (DIR) fees—which arose after some states acted on excessive rebates—is one example. So are step-edits, which require that a lower-cost drug be given first even if the doctor believes a diff erent therapy has specific therapeutic value for the patient.

In speaking about his discussions with members of Congress, Mortier commented, “They were shocked not only to see how few companies control this entire marketplace—I think that was the first thing that struck them. How did we allow this to happen?”

Dresser, whose practice often puts him in court against PBMs, agreed with Coleman that payers and the payer-PBM enterprises purposely obfuscate contract language and updates to keep providers off balance. “PBMs have a tendency to use short bulletins or portals to provide updates to their contract, which oftentimes have pretty meaningful terms in there,” he said.

Educating patients about their own benefi ts is important, too, Dresser said. Whether an oncology patient has Medicare, Medicaid, or a self-funded plan regulated by the Employee Retirement Income Security Act of 1974 can make a big difference in what laws apply during disputes.

Coleman said some states regulate PBMs, but others don’t—and this matters. Mortier said that as Congress and state regulators have done more to rein in abusive practices, health plans that include PBMs have responded with positive marketing. Yet the consolidation has made ground-level negotiations on drug prices and rebates increasingly fraught with problems, with drug makers at risk if they don’t agree to terms that may not be favorable to the consumer.

If there are any doubts about PBM power, he said, “just look at the growth.”

“These are massive, massive companies that are not producing a product, they’re not treating a patient, yet the multibillion-dollar empires that these created just by pinching through the margins in the middle of the health care system gets a lot of attention,” Mortier said.

Dresser said anything that can shed light on PBM practices helps. For all the focus they have received in Congress, he still finds a lack of awareness when he brings cases to court or arbitration.

“You can spend 45 pages of a brief and 15 minutes of an oral argument, and you’re ready for questions hoping that you can get to the pith of the issue. And the first question is, ‘So what’s a PBM?’”

Increased transparency is making a difference, the group agreed. Medicare has rules about unreasonable terms for payers—called any willing provider—that says any pharmacy able to participate should be able to do so. Dresser said CMS’ reasonableness and relevancy requirement states that very low or below-water reimbursement for practices “is not a reasonable term for participation.”

An executive order asking the Federal Trade Commission to look into certain payer-PBM practices is shedding new light on these issues, Mortier said. Until now, most of the action had been in the states, but the federal government is catching up. The fact that the Biden administration kept the Trump-era transparency rule is a positive sign.

Dresser said those impacted by vertical integration are still uncovering all its eff ects. It’s possible that the tools to rein in abuses may exist but aren’t being used. PBMs haven’t always followed conditions imposed by state regulators for approvals, for example. This is where the executive order could be helpful.

“I do think that between a broader understanding of the impact of this vertical integration at a federal level, as well as some of the things that are there, and just simply not being followed at a state level, we might be able to get some light at the end of the tunnel,” he said. “But again, from my perspective, it requires pushback—it requires involvement by providers, knowledge of what’s going on, and acting on that knowledge.” 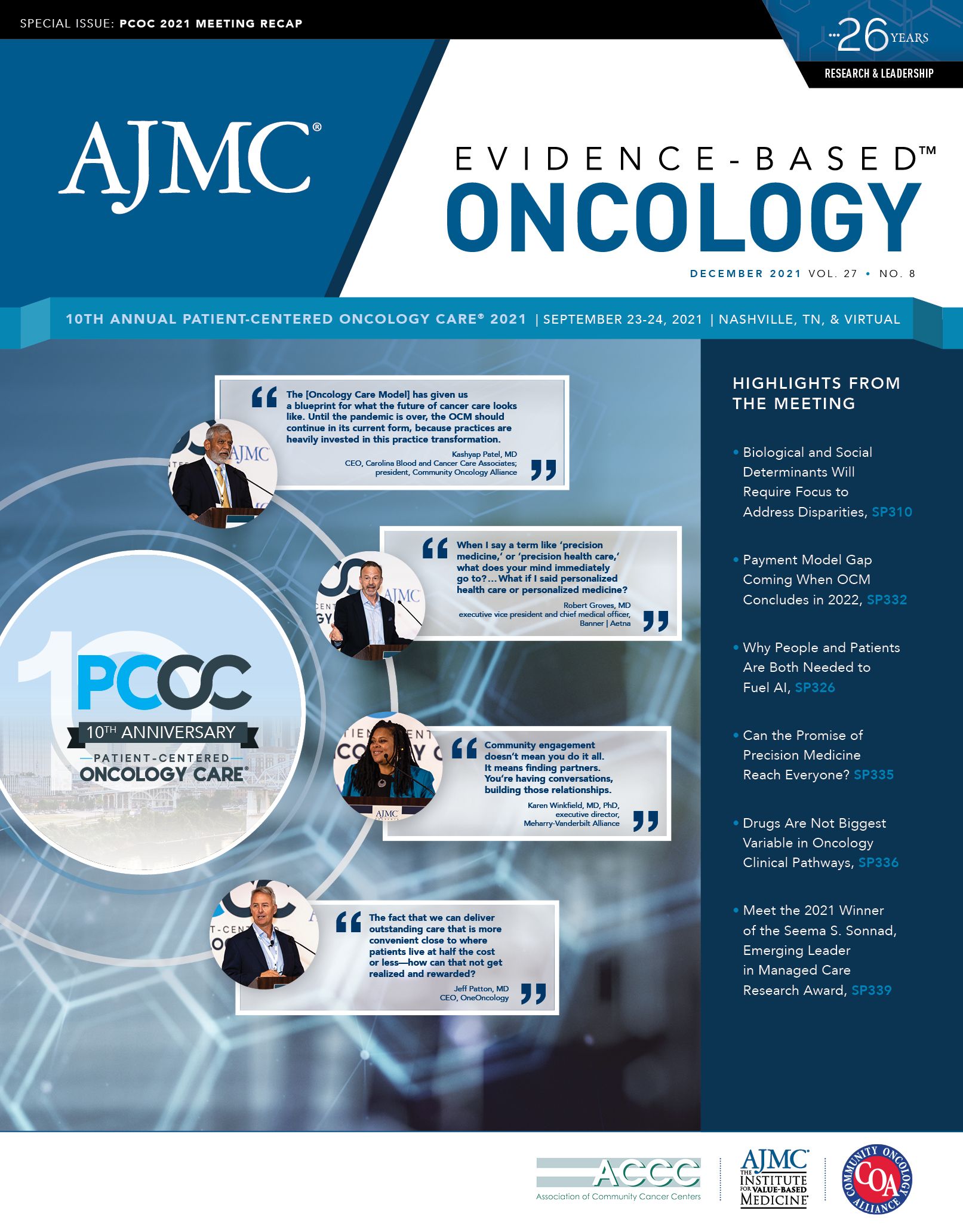 Precision Medicine Can Close Oncology Gaps—and Lead to “Doing Less”
PCOC Spotlight: There’s Been a Lot of Good for Patients With the OCM, Says US Oncology’s Neubauer
Community Oncology Leaders Find Silver Linings in the Pandemic
PCOC Spotlight: How Community Oncology Is a Low-Cost, High-Quality Provider
In Oncology, Navigating PBMs Starts With Knowing What’s in the Contract
OneOncology Speakers Make Case for Community Setting in Research, Value Delivery
Leveraging Data and AI to Connect the Life Sciences, Health Systems
PCOC Spotlight: How Payers Are Leveraging Digital Devices for Remote Monitoring
Panel Discusses the Ongoing Evolution of Remote Patient Care
PCOC SPOTLIGHT: In Taking on Disparities, What Is Actionable? What Can We Share With the Nation?
Stronger Community Connections, Fewer Barriers Are Keys to Better Trials
Genetics, Epigenetics, and Cancer: What Data Are We Missing?
PCOC SPOTLIGHT: Patel Says Let the OCM Continue for Now
PCOC SPOTLIGHT: Empowering Stakeholders Across the Breadth of Oncology
In Oncology Clinical Pathways, the Variability Isn’t With the Drugs
Related Videos
Related Content