Is Immunotherapy the Future of Glioblastoma Treatment?

Immunotherapy has seen great success in the treatment of numerous cancers, from melanoma to lung, breast, colorectal, kidney, and even some brain cancers. But thus far, despite several attempts, the devastating brain disease glioblastoma has not been among the immunotherapy success stories. In fact, glioblastoma researchers have had few advances in more than a decade.

Immunotherapy has seen great success in the treatment of numerous cancers, from melanoma to lung, breast, colorectal, kidney, and even some brain cancers.1 But thus far, despite several attempts, the devastating brain disease glioblastoma has not been among the immunotherapy success stories. In fact, glioblastoma researchers have had few advances in more than a decade.2,3

However, the next year may bring a different story for immunotherapy in treatment of glioblastoma. Researchers and physicians are anxiously awaiting the results of a study investigating nivolumab (Opdivo) in patients with glioblastoma. Two current phase 3 randomized trials with nivolumab have completed accrual of patients and are waiting for data to mature. 4,5 According to clinicaltrials.gov, the first, CheckMate 498, has a scheduled completion date of October 2019.

Evidence-Based OncologyTM (EBO) spoke with David Reardon, MD, a neuro-oncologist at the Dana-Farber Cancer Institute and the lead author on the first phase 3 study of an immune checkpoint inhibitor in glioblastoma, CheckMate 143.6 Reardon explained that the forthcoming results are “highly anticipated studies that we’re critically waiting on... we’ll know if the results were successful for 1 or both [studies], and those could be the basis for an FDA approval.”

Glioblastomas are malignant grade 4 tumors that make up about 15% of all brain tumors and are projected to be diagnosed in nearly 210,000 people globally each year.7 Glioblastomas may present de novo, described as beginning “as a grade 4 tumor with no evidence of a lower grade precursor.”8 Conversely, a secondary glioblastoma may progress from a lower-grade tumor and evolve over time.

In 2018, the former vice president and his wife, Jill Biden, EdD, founded the Biden Cancer Initiative to promote data sharing, reduce disparities of care, and bring more patients into the cancer research process.13 (The Biden Cancer Initiative is a is a Strategic Alliance Partner of The American Journal of Managed Care®; this program promotes collaboration in patient education and administration policies for cancer prevention, detection, diagnosis, research, and care approaches.)

Not Well Understood, Difficult to Treat

In an interview with EBO, Michael Lim, MD, director of the brain tumor immunotherapy program at Johns Hopkins Med- icine Sidney Kimmel Comprehensive Cancer Center and professor of neurosurgery, explained that 1 reason glioblastomas are so difficult to treat is that knowledge of the disease is so limited. “Part of the answer is that [there is so much] we don’t know. We do know that it’s a very aggressive tumor, and it has many mechanisms to make it aggressive. It suppresses the immune system at a very profound level; it does things like angiogenesis, where [the tumor] can provide its own blood vessels, and it’s behind the blood—brain barrier,” he said.

Treatment of glioblastoma usually requires the combination of several approaches, including surgery, radiation, and chemotherapy. Although surgery is widely seen as the best way to get a jump-start on treating the disease, complete resection can be difficult—frequently impossible&mdash;because the tumor often overlaps with healthy brain tissue. Additional treatments, such as angiogenesis inhibitors, may be used as a second-line agent for recurring tumors or those that have been unresponsive to treatment.

With standard treatment, median survival for adults with glioblastoma IDH-wildtype is around 11 to 15 months. For patients with IDH-mutant glioblastoma, the prognosis is significantly better, with median survival between 27 and 31 months. However, certain factors can contribute to an improved prognosis, such as if a patient is younger than 50 years or if oncologists have been able to accomplish a near-complete surgical removal of the tumor.8

Despite continued research to create more effective, novel therapies, none to date have significantly impacted patient mortality. In fact, since 2005 only 3 new treatments have been approved by the FDA to treat glioblastoma: temozolomide, bevacizumab, and tumor-treating fields.14 Glioblastoma researchers have been hopeful that a significant path to improved prognosis lies within the emerging field of immunotherapy.

Immunotherapy is a treatment designed to stimulate a patient’s own immune system to fight disease, including cancer. In the past few decades, immunotherapy has become an integral part of treating certain kinds of cancer. It works in a number of ways2: Some types of immunotherapy boost the body’s immune system in a general way to help it fight against foreign antibodies, while other types, such as chimeric antigen receptor (CAR) T-cell therapies, involve use of individually engineered T-cells to attack cancer cells. Blood cancers have had significant responses to CAR T-cell therapy, although results have not been replicated to a large degree in solid tumors thus far.

To date, much of the research involving the potential of CAR T-cell therapy to treat glioblastoma has focused on modifying T cells to recognize EGFRvIII. Although clinical trials studying EGFRvIII-targeted CAR T cells have not shown an improvement in patient mortality or shrinking of the tumor, progress was made: The trials have demonstrated that the treatment can elicit an immune response in the brain.15 Now, researchers’ next step is to figure out how to strengthen this response enough to make it able to kill tumor cells.

Unfortunately, several other immune-based treatments that looked highly effective in early trials proved disappointing in larger, phase 3 studies.2 (Reardon is also the lead investigator for a trial involving the immunotherapy durvalumab.16) An encouraging silver lining, offered Lim, is “just the fact that we have had some phase 3 [immunotherapy] trials in glioblastoma. For years we had a hard time getting past phase 2,” he said in an interview with the National Cancer Institute.

However, with glioblastoma comes a whole new realm of challenges unseen in the treatment of other cancers—most significantly, the blood—brain barrier.

The blood—brain barrier is a layer of cells that is designed to protect the brain from viruses and toxins circulating in the bloodstream. Consequently, the barrier is unable to make the distinction between a potentially life-saving therapy and a harmful virus. Often, cancer treatments are blocked from reaching their intended destination.

“Most therapeutics used for cancer patients, like chemo, are not able to get into the brain because of the blood—brain barrier,” Reardon told EBO. In brain cancer, “90% to 95% of the arsenal of therapies don’t penetrate that barrier, which makes treatment a major challenge.”

Furthermore, researchers are beginning to understand the nuances involved in how the immune system operates within the brain, and particularly, how glioblastoma tumors excel at evading an immune response. In a recent trial,17 investigators discovered that T-cell exhaustion is particularly prevalent in glioblastoma. Exhaustion, described as the upregulation of multiple immune checkpoints, is “a known contributor to failures amid immune checkpoint blockade,” Woroniecka et al, wrote in Clinical Cancer Research, and it is most likely the cause of the failures of immunotherapies in glioblastoma.

In recent years, however, the discovery of lymphatic vessels in the brain18 and improved understanding of effector T-cell trafficking into the central nervous system has led to renewed enthusiasm for immunotherapeutic approaches to treat glioblastoma.

In CheckMate 143, the investigational drug nivolumab (Opdivo) failed to increase patient survival time compared with patients treated with bevacizumab (Avastin).6 However, nearly 40% of patients enrolled in the study who received nivolumab were also taking steroids, which may have played a role in the inhibition of an immune response. Reardon explained that the concurrent use of steroids, or their use prior to administering an immunotherapy treatment, could lead to the drug’s lack of efficacy.

“Many brain cancer patients have a fair amount of swelling in the brain from the tumor or a treatment—radiation, for example. That inflammatory reaction can cause symptoms, like headaches. We have traditionally given steroids, such as dexamethasone, to decrease swelling and improve those symptoms,” Reardon described. “Unfortunately, those immunosuppressive anti-inflammatories can blunt the immune system’s [ability] to attack the tumor.”

He offered a note of caution for other physicians: “Become more conscientious about using corticosteroids and come up with other methods that can reduce swelling in the brain, because if we continue to do what we have done, many patients are just left on them for weeks to months at a time—and that will make it more difficult for the immune system to respond. We are shooting ourselves in the foot when we give patients corticosteroids prior.”

Others believe there is still hope for nivolumab. In a review of the CheckMate 143 results, Filley et al, noted that the patients in the study had already been treated for some time with chemotherapy, which depleted their lymphocytes. Given the hurdles present in glioblastoma, they proposed, this would mean “any PD-1—expressing lymphocytes activated against tumor antigens would be expected to have already migrated to tumor sites, where they are inaccessible to monoclonal antibodies.”19 Thus, they wrote, nivolumab might be more effective in patients newly diagnosed with glioblastoma, because their activated circulating T cells would have more success interacting with the agent. In patients with recurrent disease, they continued, pairing nivolumab with radiotherapy might be a better strategy, and in fact, these hypotheses are being studied in CheckMate 4984 and CheckMate 548.5

Another form of immunotherapy being studied in glioblastoma is the therapeutic vaccine. Instead of being administered for prevention, as most are, these vaccines are intended to treat an existing disease.

The vaccine DCVax-L is currently being tested in a phase 3 trial involving patients with glioblastoma whose tumors could be removed surgically. It uses dendritic cells (a type of immune cell) that are engineered to provoke an immune response against multiple proteins, or antigens, on tumors.20

Additionally, researchers are looking at oncolytic virus therapy as a potential treatment for glioblastoma. Originally, these viruses were developed as therapies to directly infect and kill cancer cells; however, investigators now believe that these viruses work similarly to vaccines and are able to stimulate an immune response against tumors.

“I think that there has been a lot of active, ongoing research, and the fact that we make breakthroughs in other cancers makes us more resolute in our drive and hopes to find help for patients with glioblastoma, and finding a cure,” said Lim.

Mary Caffrey contributed to this report.

Download PDF: Is Immunotherapy the Future of Glioblastoma Treatment? 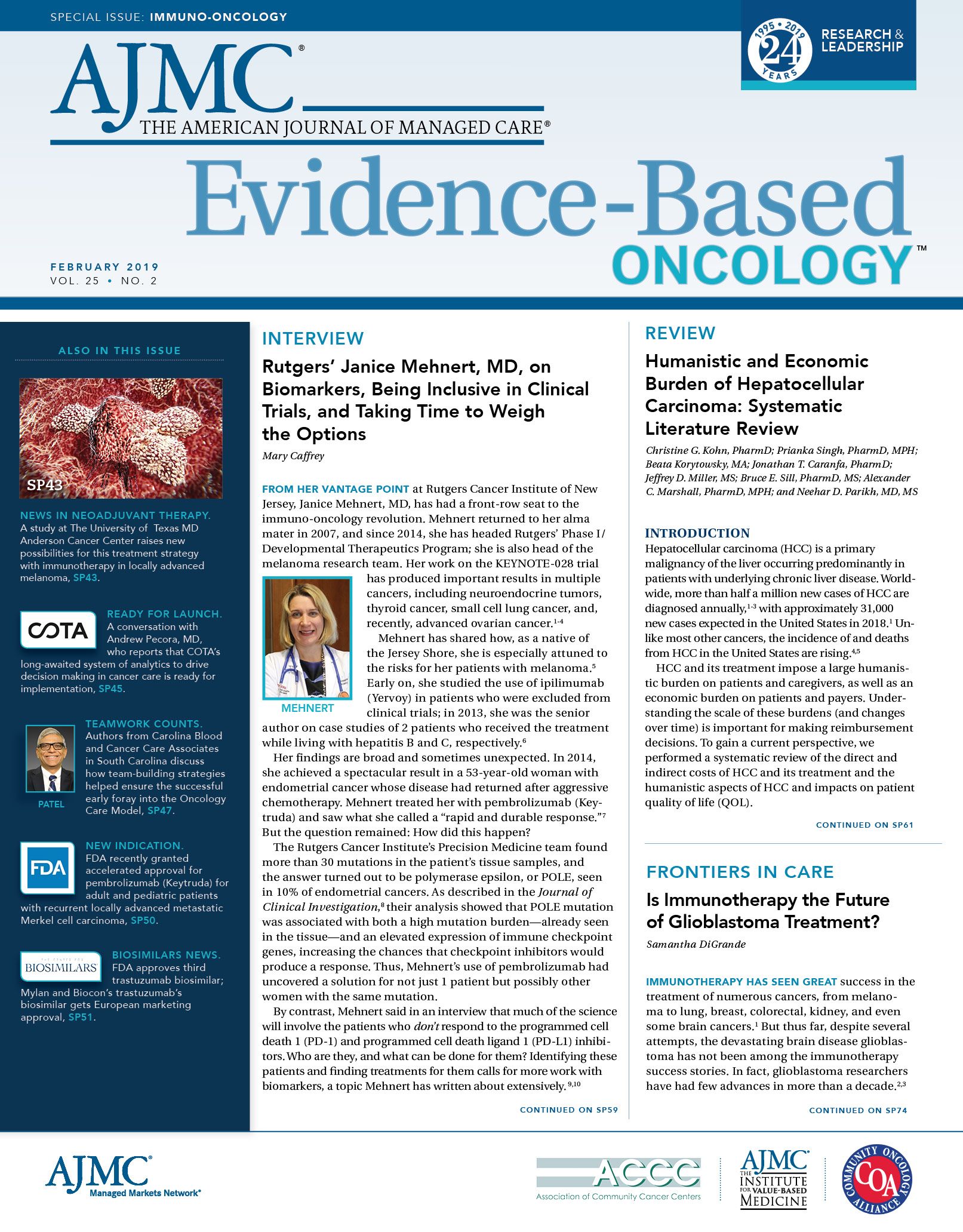