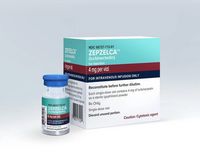 Lurbinectedin is a selective oncogenic transcription inhibitor that is being studied in 9 different tumor types. Can you discuss the mechanism of action, and why it offers promise for certain patients when a first-line therapy fails?

The reason it is important or exciting is because there was a new trial that was just published recently in The Lancet, where they looked at lurbinectedin, in small cell lung cancer. Like you said, it's been studied in other tumor types as well. But this was a report specifically in small cell lung cancer, and in that group of patients, about 35% of the entire population responded to this. And these were patients who had previously received at least one line of chemotherapy. And historically in that cohort of patients, the response rates range anywhere between 15% and 20%. So, when this study reported a 35% response rate, automatically, that became pretty big news.

What is the NCCN guidelines recommendation for lurbinectedin?

So NCCN guidelines recommend lurbinectedin in the relapse setting, meaning patients who have failed at least one previous line of chemotherapy, and it is the second drug that has been FDA approved in this setting after topotecan. And so the NCCN guidelines recommend that as preferred option in patients who have failed small cell lung cancer…and it has been about more than 3 months since their previous treatment. So chemotherapy-free interval of 90 days. For the other group for patients with a chemotherapy-free interval of less than 90 days, it is an option.

As I said earlier, there's not too many good treatment options for these patients. Topotecan is currently the, or was currently, the only approved indication in this setting. And topotecan had a lot of problems with side effects and patients not tolerating it. So, this provides a very important option for patients who are in this setting, meaning people who have failed one line of chemotherapy for small cell lung cancer and currently have relapsed disease. So, it becomes an important option for this group of individuals.

And the reason NCCN approved it so rapidly was that it recognizes the fact that there were not too many treatment options for these patients. And this represented an important advance.

As the medical community awaits a readout from the phase 3 ATLANTIS trial to see how lurbinectedin (Zepzelca) shapes up against standard of care (SoC), a look at the currently available data on the recently approved treatment looks encouraging for patients with small cell lung cancer (SCLC) who have progressed following first-line therapy

In June, lurbinectedin became a welcome addition to the SCLC treatment landscape, with the FDA handing the alkylating drug an accelerated approval for adult patients whose metastatic SCLC has progressed on or after platinum-based chemotherapy. Lurbinectedin became just the second approved treatment for this indication, joining topotecan.

At the time, Robert Iannone, MD, MSCE, executive vice president, research and development of Jazz Pharmaceuticals, said in a press release, “We appreciate the decision by the NCCN to quickly incorporate Zepzelca into the Clinical Practice Guidelines in Oncology as it supports our commitment to ensuring that patients with relapsed small cell lung cancer are able to access this important new treatment option.”

The FDA approval, and the quick inclusion of lurbinectedin in the NCCN guidelines, came after data from a phase 2, open-label, single-arm, basket trial showed that among 105 patients, lurbinectedin achieved a 35% overall response rate, with a median duration of response (DOR) of 5.3 months.

The data were encouraging, as they favored the new treatment over historical data for SoC topotecan. While a direct comparison cannot be made against topotecan from the single-arm trial, Iannone, in an interview with The American Journal of Managed Care®, pointed to a group of patients from a 2014 study he said is a suitable comparator to those included in the phase 2 basket trial. The study he referenced included 213 patients receiving topotecan, which elicited a 16.9% response rate and median DOR of 4.2 months.

Lurbinectedin, in combination with doxorubicin, and topotecan are currently being compared head-to-head in the phase 3 ATLANTIS trial, although the investigators will also have the choice of cyclophosphamide/doxorubicin/vincristine as an SoC option.

With topotecan typically being difficult to tolerate, pooled safety data of single-agent lurbinectedin versus topotecan from the randomized phase 3 CORAIL trial and the phase 2 basket trial presented at the American Society of Clinical Oncology 2020 Annual Meeting gave early indications that lurbinectedin also has a safety advantage.

Small cell lung cancer is an aggressive disease that has had few treatment options; however, a larger proportion of patients are responding to lurbinectedin, making it a good, new option, said Apar Kishor Ganti, MD, professor of internal medicine, Division of Oncology & Hematology, University of Nebraska Medical Center.

Why is small cell lung cancer so aggressive, and why is lurbinectedin effective after chemotherapy for these patients?

Small cell lung cancer in general is a very aggressive disease. And even though initially it responds very well to chemotherapy, better than a lot of other tumors, these patients almost invariably relapse. And the exact reasons as to why this happens is not known. But there are multiple theories, one of which is suggests that there is a group of cells that are hidden or do not get exposed to the previous treatments, and they then start growing rapidly and…cause relapse.

It is a fairly aggressive disease, also because it has a lot of intracellular processes that go on and we have still don't understand them completely. But what we do know is patients who have relapsed don't tend to respond to multiple other treatments or any other treatments. If you look at it, multiple different treatments have been studied in this setting, and across the board the median progression-free survival seems to be anywhere between 2 and 3 months. And the median overall survival seems to be anywhere between 6 to 9 months. So, not great treatment options.

And in that setting, when you have a larger proportion of patients responding, like we see with lurbinectedin, it automatically becomes a good treatment option. It's almost like we've been looking for some treatment options for this group of patients for a long time.

What is the importance of lurbinectedin being available in an outpatient clinic?

Less than a month after the FDA handed its accelerated approval to lurbinectedin (Zepzelca) for the treatment of adult patients whose metastatic small cell lung cancer (SCLC) has progressed on or after platinum-based chemotherapy, the National Comprehensive Cancer Network (NCCN) added the alkylating drug to its Clinical Practice Guidelines in Oncology for SCLC, a mark of recognition for the drug filling of an unmet need.

“Small cell lung cancer is a disease with limited treatment options, and the approval of Zepzelca represents an important advance for patients whose metastatic SCLC has progressed on or after platinum-based therapy,” said Bruce Chozadd, chairman and chief executive officer of Jazz Pharmaceuticals, in a press release at the time of lurbinectedin’s approval. “While patients may initially respond to traditional chemotherapy, they often experience an aggressive recurrence that is historically resistant to treatment.”

Based on this unmet need, NCCN named lurbinectedin its recommended treatment for all patients with SCLC progressing on or after initial treatment with platinum-based chemotherapy. The treatment was also named the network’s preferred treatment for patients progressing in 6 months or less, a group of particularly difficult-to-treat patients, explained Robert Iannone, MD, MSCE, executive vice president, research and development of Jazz Pharmaceuticals, in an interview with The American Journal of Managed Care®.

The latter designation means lurbinectedin is now preferred over treatment with topotecan or retreatment with the same chemotherapy the patient might have gotten initially.

In addition to showing promising efficacy—a 35% overall response rate and mediation duration of 5.3 months—in a phase 2, open-label, single-arm, basket trial of 105 patients, lurbinectedin has also showed early indications of being a more tolerated option for patients. In the phase 2 study, less than 2% of 105 patients in pivotal trial had to permanently discontinue due to a toxicity, so overall very well tolerated, explained Iannone.

The treatment can be administered in an outpatient setting and has a dosing schedule of a single infusion every 21 days, which may lead to less time a patient needs to be in the clinic or hospital than with other options.

“Zepzelca represents a new treatment option for patients who have progressed after initial chemotherapy and one that is fairly easy to give, well tolerated, and has very promising efficacy,” said Iannone. “It provides another option, but it also may make therapy available to some patients who would not have been retreated at all.”

Iannone explained that some patients, after progressing on their initial chemotherapy regimen, will not receive subsequent therapy based on their condition or based on the overall benefit-risk ratio of giving another therapy that may have marginal effects.

Lurbinectedin, in combination with doxorubicin, is currently being tested in a trial comparing it head-to-head with standard of care (SoC)—topotecan or the combination of cyclophosphamide, doxorubicin, and vincristine—to further assess the efficacy and safety of the newly approved treatment, as well as seeing how it compares with outcomes of SoC options.

Lurbinectedin is being studied in a number of diseases, but in lung cancer it has a more favorable side effect profile compared with topotecan, said Apar Kishor Ganti, MD, professor of internal medicine, Division of Oncology & Hematology, University of Nebraska Medical Center.

Are there other tumor types where lurbinectedin seems to hold promise?

So, lurbinectedin is being studied in other diseases like breast cancer, mesothelioma, chronic lymphocytic leukemia, among others. But the difference in these other conditions compared to small cell [lung cancer] is there are other treatment options that are reasonably effective in these other cancers, unlike in small cell, so that's where it becomes much more important in in this particular setting.

One other reason why lurbinectedin may be effective is, like I told you earlier, there is a group of cells that seem to be shielded from chemotherapy. We call them cancer stem cells. And there are some lab data that suggests that lurbinectedin may inhibit cancer stem cells, as well. Again, this is all preliminary data. And we don't necessarily know if that occurs in humans or not, but those are some of the hypothesized mechanisms of action.

What other advantages are there of lurbinectedin over topotecan?

As far as small cell lung cancer itself is concerned, even though there is a lot of research going on in small cell, multiple different drugs have been tried—targeted therapies, immunotherapy—there is some evidence to suggest that immunotherapy helps with chemotherapy in the frontline setting. But immunotherapy by itself in patients who have failed chemotherapy does not seem to be much more effective. People have tried targeted therapies, again, not one of them has shown to have any meaningful benefit for these patients. So that has been very disappointing.

There have been multiple drugs that have been studied. Unfortunately, none of them have had a significant benefit so far. So, it's a fairly difficult to treat disease. And like I mentioned earlier, even though it seems to respond quite well to initial chemotherapy…most patients relapse and very few are cured even if they present with very early stage disease. And that's why it's a very challenging disease to treat.