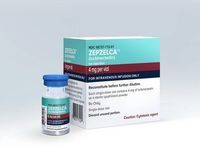 Less than a month after the FDA handed its accelerated approval to lurbinectedin (Zepzelca) for the treatment of adult patients whose metastatic small cell lung cancer (SCLC) has progressed on or after platinum-based chemotherapy, the National Comprehensive Cancer Network (NCCN) added the alkylating drug to its Clinical Practice Guidelines in Oncology for SCLC, a mark of recognition for the drug filling of an unmet need.

“Small cell lung cancer is a disease with limited treatment options, and the approval of Zepzelca represents an important advance for patients whose metastatic SCLC has progressed on or after platinum-based therapy,” said Bruce Chozadd, chairman and chief executive officer of Jazz Pharmaceuticals, in a press release at the time of lurbinectedin’s approval. “While patients may initially respond to traditional chemotherapy, they often experience an aggressive recurrence that is historically resistant to treatment.”

Based on this unmet need, NCCN named lurbinectedin its recommended treatment for all patients with SCLC progressing on or after initial treatment with platinum-based chemotherapy. The treatment was also named the network’s preferred treatment for patients progressing in 6 months or less, a group of particularly difficult-to-treat patients, explained Robert Iannone, MD, MSCE, executive vice president, research and development of Jazz Pharmaceuticals, in an interview with The American Journal of Managed Care®.

The latter designation means lurbinectedin is now preferred over treatment with topotecan or retreatment with the same chemotherapy the patient might have gotten initially.

In addition to showing promising efficacy—a 35% overall response rate and mediation duration of 5.3 months—in a phase 2, open-label, single-arm, basket trial of 105 patients, lurbinectedin has also showed early indications of being a more tolerated option for patients. In the phase 2 study, less than 2% of 105 patients in pivotal trial had to permanently discontinue due to a toxicity, so overall very well tolerated, explained Iannone.

The treatment can be administered in an outpatient setting and has a dosing schedule of a single infusion every 21 days, which may lead to less time a patient needs to be in the clinic or hospital than with other options.

“Zepzelca represents a new treatment option for patients who have progressed after initial chemotherapy and one that is fairly easy to give, well tolerated, and has very promising efficacy,” said Iannone. “It provides another option, but it also may make therapy available to some patients who would not have been retreated at all.”

Iannone explained that some patients, after progressing on their initial chemotherapy regimen, will not receive subsequent therapy based on their condition or based on the overall benefit-risk ratio of giving another therapy that may have marginal effects.

Lurbinectedin, in combination with doxorubicin, is currently being tested in a trial comparing it head-to-head with standard of care (SoC)—topotecan or the combination of cyclophosphamide, doxorubicin, and vincristine—to further assess the efficacy and safety of the newly approved treatment, as well as seeing how it compares with outcomes of SoC options.