As a senior program officer for The John A. Hartford Foundation, Amy Berman, BS, RN, has devoted her career to spreading the word about better ways to deliver healthcare.

As a senior program officer for The John A. Hartford Foundation, Amy Berman, BS, RN, has devoted her career to spreading the word about better ways to deliver healthcare. Three years ago, she became her own case study when she discovered she had inflammatory breast cancer, a rare form of the disease with poor odds of 5-year survival. Berman’s story of embracing palliative care and an active life embodies the movement toward “person-centered” care that will become essential as the population with cancer ages.

For Amy Berman, BS, RN, today’s cancer care delivery system is a lot like the sound of 1 hand clapping: It can be out of sync and unproductive, because it fails to touch the patients it treats.

Berman, a senior program officerat The John A. Hartford Foundation, predicts that demographics will drive change. “We have 10,000 people turning 65 every day,” she said, and this group is getting older. The sexy senior on the tennis court who takes a pill for high blood pressure is increasingly joined by the extremely old person, aged 85 years or above, who suffers from multiple chronic conditions or dementia. This latter group, Berman said, is accounting for more and more of today’s cancer diagnoses.

“We have a system that is perfectly designed for someone to show up in the emergency department (ED), where we don’t want them to show up,” Berman said. Improving the value proposition means working to keep people away from the ED, in part by trimming the twin pillars of runaway cost.

Berman presented the concept of the “triple aim,” which she said refers to better health, better care, and lower costs. “Another way to look at value is gaining the same or better quality care at the same or lower cost. You want to improve quality as you decrease cost,” she said. “That is the improvement of a value proposition.”

Professionally, Berman’s focus has been to find ways to avoid hospital readmissions. She has a nurse’s eye and heart. But 3 years ago, the red spot that appeared on her right breast put Berman on the “patient” side of the table. Even before her test results came back, Berman knew what she was facing, and the look on her primary care physician’s face only strengthened her suspicion of inflammatory breast cancer.

“Inflammatory breast cancer looks different—it’s not a tumor or a lump that can be picked up early,” Berman said. When it clumps up, it appears on the skin and looks like the peel of an orange.

Given her background, Berman spent the night before her biopsy reviewing the literature: Who was treating inflammatory breast cancer? Who has funding? Where are the best treatments being offered? What does the National Cancer Institute say about different approaches? Berman found an expert oncologist in her search and resolved to visit that person.

After her biopsy, there was more sobering news from a body scan: Her lower spine had a “hot spot” of activity—it could be an old surfing injury, but it could mean the cancer had already spread. Berman had a bone biopsy, and she traveled out of state with her 70-year-old mother in tow to see the specialist she had identified.

During their trip, she was walking with her mother when she received a call from her oncologist: the cancer was in her lower spine. At diagnosis, she was already at stage IV. Her 5-year survival prognosis was now 11%.

“It was raining out, and hearing those words, my mother and I dropped our umbrellas, and we hugged on the street and cried. We cried the whole way home, and it felt like the entire world was crying with us."

“It was absolutely devastating, but we stopped crying pretty quickly, and I’ll tell you why. It is really important to know that for whatever time I have left, I didn’t want to be spending it in tears—or not doing.”

The next day she visited the specialist. The oncologist wanted aggressive treatment: a mastectomy, radiation, chemotherapy. Knowing the cancer was already in her spine, Berman asked, “Why?” The treatment would rob Berman of her ability to work, to write, to enjoy time with her family. It would compromise her immune system and leave her open to infections.

“I probably have saved my payer about $500,000,” Berman told the gathering. More important, however, are the experiences Berman has gained: “I jet-skied to the Statue of Liberty this summer. I’ve climbed the Great Wall of China twice. I work, I play; I have a very good life, and I am getting treatment.”

Berman has opted for palliative care, and lower-dose chemotherapy that holds her cancer in check. She takes an oral medication—a single pill&mdash;at night; once a month, she has an infusion to keep her bones strong.

The literature supports Berman’s approach. “People actually do live longer when you focus on pain and symptoms and quality of life,” she said, citing a study in the New England Journal of Medicine (Figure).1 The question, asked Berman, is why doesn’t this happen more often?

“How can care be patient-centered when we don’t discuss serious illness with patients?” she asked. “I don’t think people are trying to do bad things, even that physician who would have suggested that I throw everything at it.”

That physician, Berman said, laid out his plan before asking what her goals were—because that’s the way he practiced medicine. Care that is truly patientcentered, she said, “Considers the patient’s cultural traditions, their personal preferences, values, their family situation, and their lifestyle.”

The value proposition, she said, comes when the patient gets all the information and is part of the decision, “because studies show that people actually choose less aggressive care when they understand the totality of their situation.”

Cancer care has not done this historically. “Oncology chooses to look in a narrow way at the cancer, and we have to begin addressing the person.”

Data show physicians often don’t give patients the full story.2 Yet the American Medical Association code of ethics, revised in 2006, states that they must. This is, as Berman put it, the “nut” of the issue in the rising cost of cancer care: physicians must start embracing palliative care, which Berman defined as that “layer of support” that can go alongside curative treatment, not just at the end of life. Palliative care exists for other ailments: congestive heart failure, dementia, and other conditions with pain. It also covers advance planning, or “the stuff that oncology typically does not want to do.”

What the data show, Berman said, is that physicians want to do less just as informed patients do, but what happens instead is “liability-driven care.”

She presented numbers for what drives up the cost of cancer care, as well as the 5 elements of the “Choosing Wisely” initiative produced by the American Society of Clinical Oncology.3 They focus on symptom relief and palliative care, and are: 1. Do not give patients starting on a chemotherapy regimen that has a low or moderate risk of causing nausea and vomiting anti-emetic drugs intended for use with a regimen that has a high risk of causing nausea and vomiting.

2. Do not use combination chemotherapy (multiple drugs) instead of chemotherapy with 1 drug when treating an individual for metastatic breast cancer, unless the patient needs a rapid response to relieve tumor-related symptoms.

3. Avoid using PET or PET-CT scanning as part of routine follow-up care to monitor for a cancer recurrence in patients who have finished initial treatment to eliminate the cancer, unless there is high-level evidence that such imaging will change the outcome.

4. Do not perform prostate-specific antigen (PSA) testing for prostate cancer screening in men with no symptoms of the disease when they are expected to live less than 10 years.

5. Do not use a targeted therapy intended for use against a specific genetic aberration unless a patient’s tumor cells have a specific biomarker that predicts an effective response.

The Institute of Medicine’s recent report, “Delivery High-Quality Cancer Care: Charting a New Course for a System in Crisis,” reported the obvious: When cancer strikes older people, who have more than just cancer, “value” takes on new meaning, and it may not be the same thing for each person.

“The number 1 goal was to engage your patient, and you can read the reasoning behind it,” Berman said. Starting palliative care—that “extra layer” of support&mdash;at the onset of a serious disease, rather than at the end of life, will bring cost savings and greater quality of life, she said.

Palliative care keeps people from showing up in the ED; patients may be able to resolve issues over the phone. It keeps people from ending up without advance directives. “For those of you who are in the managed care environment, in ACOs, working under new patient methodologies, you have the ability to offer it all to your patients,” she said. “If you are in a capitated environment, you will benefit from this. It will reduce liability.” 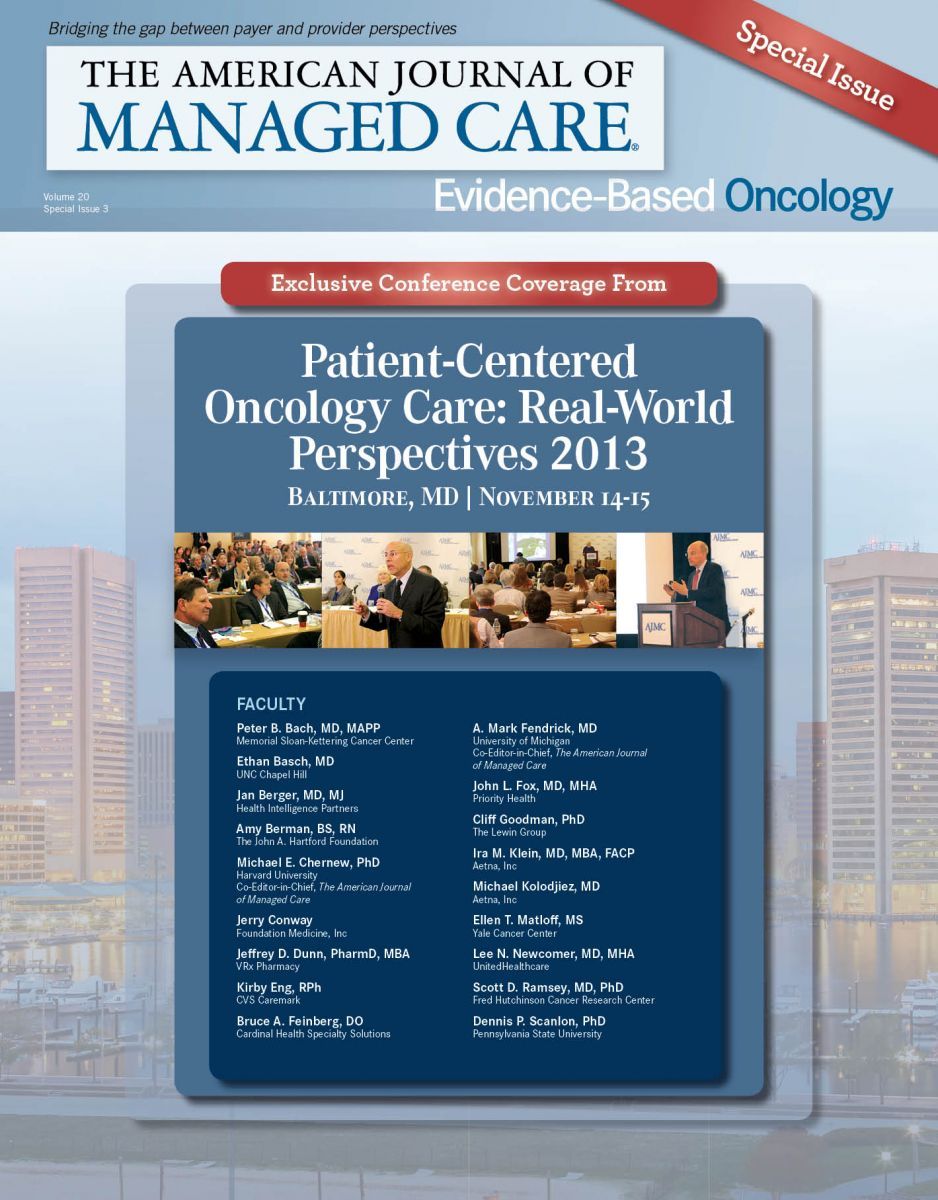 Value-Based Pricing: The Role of Outcomes Data in Pricing Models
Measures That Improve Quality Must Be Nimble if Imperfect, UnitedHealthcare's Newcomer Explains
When Making Decisions in Cancer Care, Patients Want to Know: How Will I Feel?
The Angelina Effect: Rising Interest in Genetic Testing Creates Opportunities for Patients-and Profit
Person-Centered Care: The New Business Case for Cancer
Faculty Index
Can Clinical Pathways Change the 'Culture' in Cancer Care?
Will Shifts in Oncology Outpatient Points of Care Lead to More Profits or Savings?
Cancer Patients Need Better Information, and Payers Should Demand They Receive It
With Data, Access and Sharing Are Keys to Improving Quality
Care Reflects Patient Choice, but Having the Data Reflect 'Consumerism' Is Another Matter
Putting the 'Economics' Back Into Health Economics Outcomes Research
Grappling With the Fallout of Genetic Testing, in Oncology and Beyond
The Present-and Future-of Genetic Profiling in Oncology
Payer Perspectives in Genetic Counseling
Related Videos
Related Content