Researchers at the 59th Annual Meeting and Exposition of the American Society of Hematology in Atlanta, Georgia presented studies investigating the quality of life associated with various oncologic diseases.

Balancing Hospice Utilization With the Need for Transfusion in Leukemia

Is transfusion dependence a barrier to hospice utilization among older patients with leukemia who are enrolled in Medicare? This was the query posed by a collaborative study among researchers at Brown University, Rhode Island Hospital, and Duke Cancer Institute, presented during an Outcomes Research session at the 59th Annual Meeting and Exposition of the American Society of Hematology.1

Patients with blood cancers use palliative and hospice services at end of life (EOL) less frequently than those with solid tumors. Previous studies have suggested that transfusion dependence (TD) may be a barrier to hospice enrollment, as life-extending transfusion support may not be allowed by hospice organizations. A 2015 study in Cancer,2 which evaluated healthcare utilization and EOL use in older patients with acute myeloid leukemia, found that hospice services were rarely utilized in their study cohort. The need for frequent blood product support in these patients may be a significant factor, the authors wrote.

A more recent study, which conducted a survey among US hematologic oncologists to gather their perspective on the utility of hospice care for patients with blood cancers, found that despite the value of hospice care, lack of adequate services prevented them from making hospice referrals. More than half of the survey respondents said that they were more likely to refer their patients to hospice services if red cell/platelet transfusions were available.3

“Most hospices do not allow transfusion support,” LeBlanc said, adding that while TD has been noted as a barrier for hospice use, it has not been well studied in the context of leukemia. LeBlanc explained that the lack of transfusion support in hospices is a practical matter, where per diem reimbursement by CMS is small. “Therefore, we sought to evaluate the association between TD and outcomes at EOL among Medicare beneficiaries with acute and chronic leukemias.”

The study used claims information from the linked Surveillance, Epidemiology, and End Results (SEER)—Medicare database to identify Medicare beneficiaries 65 years and older with acute (myeloid or lymphoblastic) and chronic (lymphocytic, myeloid, or myelonomocytic) leukemias, diagnosed between 1996 and 2011 and who died between 2001 and 2011, at least 30 days from diagnosis. The longer timeframe, LeBlanc said, would account for the expected longer lifespan with chronic leukemias. TD was defined as at least 2 transfusions—at least 5 days apart, inpatient or outpatient&mdash;within 30 days before death or hospice enrollment.

Cost of care at EOL was approximated as in ation-adjusted Medicare spending within 30 days before death.

Of the original 35,672 patients who were returned following a SEER-Medicare query, patients with incomplete Medicare claims as well as patients who enrolled in hospice prior to diagnosis were excluded. From the remaining pool of patients with complete Medicare data, patients with less than 30 days of survival were eliminated. This left the authors with a cohort of 21,076 eligible patients (median age, 79 years; 44% women; 46% acute leukemias), 20% of whom were TD before death/ hospice enrollment.

There was no significant difference in death in the inpatient setting between TD (46%) and non-TD (43%) patients. Chemotherapy use in the last 14 days of life was slightly higher in the TD patients (14% versus 11%).

LeBlanc concluded that that while hospice use has increased in patients with leukemias, the results of their study associate TD with significantly shorter hospice length of stay, which could implicate it as a barrier to hospice enrollment.

He warned, however, that the use of claims-based data in their study prevented them from adjusting for any marker of disease severity. Additionally, the findings may not hold true for non- Medicare patient populations, including younger patients or those on managed-care plans.

1. Olszewski AJ, Egan PC, LeBlanc TW. Transfusion dependence and use of hospice among Medicare bene ciaries with leukemia. In: Proceedings from the 59th Annual Meeting and Exposition of the American Society of Hematology; December 9-12, 2017; Atlanta, GA. Abstract 277.

There are several demographic features of patients with hematologic malignancies that affect their likelihood of dying at home, suggesting a crucial role for access to caregiver support, according to an abstract presented at the 59th Annual Meeting of the American Society of Hematology in Atlanta, Georgia.

“Despite advances in the management of patients with hematologic malignancies, a significant proportion of patients will still die of their disease,” the study authors wrote.

Existing quality indicators at the end of life (EOL) focus on whether patients receive aggressive interventions such as chemotherapy during the last days of life. However, many patients and caregivers have put emphasis on the importance of time spent at home as a quality measure for EOL care.

Using a population-based health system administration database from Ontario, Canada, the authors identified 6792 adult patients who died of a hematologic malignancy between January 2005 and December 2013. The primary outcome of “days at home" in a patient’s last 6 months of life was defined as 180 days minus the number of days in an acute care facility.

The authors also accounted for patient variables, such as comorbidities identified by a mortality risk score, and system level variables, such as palliative care consultation prior to the last 6 months of life, that predicted the number of days at home and determined trends over time. The patients’ median age was 72 at the time of death, and 58% of the patients were male. The median number of days at home during the last 6 months of life was 156 days; 81% of the patients spent more than 120 days at home.(FIGURE).

Patients who were older spent more time at home than younger patients, and women spent less time at home than men. A possible explanation for this is that women typically live longer than men, and when women get sick, their spouses have often already died or can’t provide care because they are too frail, said lead author Matthew Cheung, MD, MS, FRCP, associate scientist, Sunnybrook Health Sciences Center in an interview with The American Journal of Managed Care®.

“We see that there may be a few targetable patient characteristics that can be identified to help us better help patients spend time at home,” said Cheung. “Patients with comorbidities, women, and patients who are younger spend less time at home, so we can target these patients.”

life (HRQoL) when compared to patients with more education and/or professional/managerial positions, according to an abstract presented at the 59th Annual Meeting of the American Society of Hematology in Atlanta, Georgia.

“SES can affect HRQoL through a variety of mechanisms, including poor access to healthcare, physical and mental comorbidities, low levels of health literacy or health activation, and consequent negative health behaviors,” wrote the study authors.

The cross-sectional, observational study looked at 1289 patients with AL amyloidosis evaluated between 1994 and 2014 at the amyloidosis Center

at Boston University. Participants completed the SF-36v1 Health Surveys, within 7 days of their initial evaluation, which assessed HRQoL in relation to 8 domains and 2 component measures:

• Role limitation due to emotional health problems (RE)

Participant SES was determined based upon occupation type and educational attainment. Authors used regression models including each SF-36v1 domain or summary score as a dependent variable to determine if there was a link between SES and HRQoL. The association was determined independent of other characteristics such as type of organ involvement, multiorgan involvement, eligibility for stem cell transplantation, and time since diagnosis.

The models produced results showing patients with less years of education reporting worse HRQoL impairment compared to patients with more education. Differences by educational attainment (with the exception of GH, MH, and MCS) all exceeded a threshold of 1 minimally important difference (MID).

Using occupation at the independent variable for SES, scores also differed drastically by occupation. Patients in other (non-professional/managerial) occupations reported statistically (P < .05 for all) and clinically (exceeding 1 MID) substantial deficits on all SF-36v1 scores.

Patients on disability presented significantly worse SF-36v1 scores (P < .05 for all), and deficits exceeded 1 MID for all scores. For PF, VT, and PCS, the differences surpassed 2 MIDS. Patients who were retired conveyed significant deficits for PF and RP (P < .05 for both).

“Outreach efforts designed to increase the understanding of the disease among community-based clinicians should highlight the additional HRQoL burden and potential need for more comprehensive care among patients with SES groups,” the authors concluded.

The Effects of Myeloproliferative Neoplasm Symptoms on Quality of Life

A secondary analysis presented at the 59th Annual Meeting of the American Society of Hematology in Atlanta, Georgia, found that all individual symptoms of myeloproliferative neoplasms (MPNs) correlate with quality of life (QoL).

“Patients with MPNs are faced with high disease-related symptom burden and QoL decrements,” the authors wrote.

Previous study results have shown that symptom burden measured from the MPN Symptom Assessment Form (MPN-SAF) Total Symptom Score has a strong correlation with QoL measured by the Global Health Status/QoL (GHS/QoL) scale of the European Organization for Research and Treatment of Cancer Quality of Life Questionnaire Core 30 (EORTC QLQ-C30). However, according to the authors, an analysis of predictors of QoL in this population has not been performed.

The authors used data from the previously enrolled cohort of 1422 patients with MPNs who completed a MPN-SAF and EORTC QLQ-C30. The association between individual symptoms and QoL was assessed by the GHS/QoL scale of the EORTC QLQ-C30.

Although study findings suggest that all individual symptoms correlate to a certain extent with QoL, inactivity was the most correlated; having 1 severe symptom and having multiple symptoms of moderate intensity were meaningfully correlated with QoL reduction.

“The symptom burden experience is variable and undoubtedly bears heavily on quality of life among patients with MPNs as supported by these results,” the authors concluded. 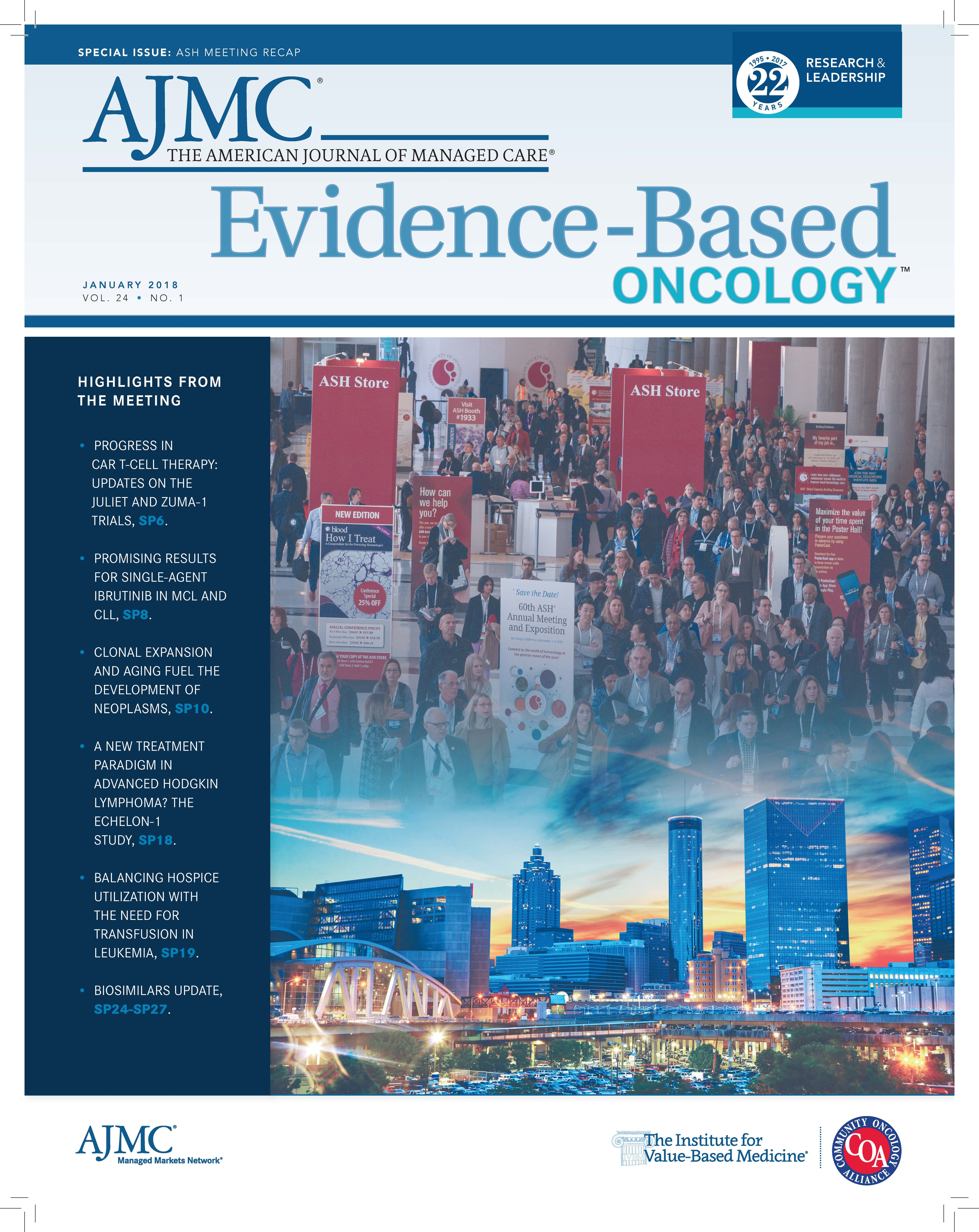