Reports of the Demise of Chemotherapy Have Been Greatly Exaggerated

The expanding arsenal of targeted and immuno-oncology drugs has unalterably changed the landscape of systemic cancer treatment, but chemotherapy will remain critical for years if not decades to come.

Does the rapid integration of both targeted and immuno-oncology drugs into treatment guidelines across solid tumors and hematologic malignancies herald the beginning of the end of chemotherapy as a foundational element in systemic cancer treatment? We respond to similar assertions posited after the 2018 American Society of Clinical Oncology Annual Meeting with an analysis of past, current, and future treatment of breast cancer—a tumor central to the evolution of modern cancer treatment principles. Our conclusions assert that reports of the demise of chemotherapy are greatly exaggerated and, as chemotherapy is likely to remain foundational for years to come, research is warranted to improve its patient-centricity.

The listserv headlines accompanying the opening of the 2018 American Society of Clinical Oncology Annual Meeting were intended to be provocative. Medscape ran the headline “&thinsp;‘End of an Era’ for Chemo in Non-Small Cell Lung Cancer” on June 3, 2018.1 The reality was more nuanced, as the research suggested that those patients with advanced non—small cell lung cancer (aNSCLC) whose tumors expressed progressive death ligand-1 might avoid having chemotherapy as a first-line treatment.2 But the point wasn’t to be nuanced; rather, it was intentional—a shot across the bow to herald the beginning of a new era in cancer medicine, one in which chemotherapy was no longer the backbone of systemic treatment. An expanding arsenal of targeted and immunologic therapies was not only resulting in chemotherapy-free treatment guidelines for rarer cancers like renal cell carcinoma and melanoma but was also transforming the treatment of the most common and lethal of cancers. The declaration was met with giddy optimism, teasing the reader with the notion that chemotherapy may soon become a footnote in cancer treatment history alongside Coley’s toxin and cobalt. What did the emergence of targeted therapies, checkpoint inhibitors, chimeric antigen receptor T-cell therapy, vaccines, and novel gene therapies mean for systemic cytotoxic drugs as the backbone of solid tumor, lymphoma, and much of leukemia management? A review of the past, current, and near future of the systemic treatment of breast cancer (BC)&mdash;the archetype of cytotoxic therapy development&mdash;might shed light on the continued role of chemotherapy in the management of advanced cancer in both the near and long term.

The Origins of Systemic Chemotherapy Treatment of BC

The innovation of targeted and immunologic therapies and the resulting rapidly evolving treatment paradigms we witness today very much mirror the sequential advancement of chemotherapy 60 years ago. Following the introduction of 5-fluorouracil (5-FU) in the late 1950s, considerable advances in the understanding of cancer carcinogenesis, cell cycle kinetics, and mutational targets led to numerous paradigm shifts in the systemic treatment of advanced malignancies.3 After an initial surge of drug approvals with differing mechanisms of action, research shifted to combination chemotherapy in the hopes of increased efficacy with less dose-limiting toxicity.3-5 At the forefront of this research was investigation into BC treatments, beginning with the combination of cyclophosphamide, methotrexate, and 5-FU in the 1970s, followed by anthracycline-based regimens in the 1980s and taxane-based combinations in the 1990s.3,6 This golden age of chemotherapy discovery appeared to sunset as explorations of dose density and dose intensification, supported by bone marrow (stem cell) transplant, ended the decade with one of the darker chapters in BC research.

Although progress continued in the development of new chemotherapeutic agents for the salvage treatment of metastatic BC (mBC) (capecitabine, 1998; nab-paclitaxel, 2005; ixabepilone, 2007; eribulin, 2010), researchers at the start of the new millennium seemed more focused on limiting chemotherapy toxicity via improved supportive care while reducing chemotherapy exposure via genetic profiling.7,8 Clinical trials testing hormonal and human epidermal growth factor receptor 2 therapies dominated meeting presentations. More recently, novel therapeutics including cyclin-dependent kinase 4/6 (CDK 4/6) inhibitors, poly (ADP-ribose) polymerase inhibitors, and checkpoint inhibitors have gained FDA approval, thus rapidly altering treatment guidelines and establishing new standards of care for first-line treatment of mBC. The latest additions to this arsenal—likely to continue this trend&mdash;are the phosphoinositide 3-kinase inhibitors. The rapid expansion of the mBC systemic, nonchemotherapy cancer arsenal would appear to support the contention that, like in aNSCLC, the need for conventional chemotherapy in mBC is fading. However, critical differences in the mBC patient journey challenge that prediction.

An Exaggerated Report of Death

There are stark differences in the epidemiology of BC versus aNSCLC. First, unlike aNSCLC, in which the majority of patients are initially diagnosed with advanced disease, more than 85% of patients with BC present with lower-stage disease, with many receiving adjuvant chemotherapy.6 Given the longer clinical trial time required for proof of superiority in the adjuvant setting, it is unlikely that chemotherapy will be displaced from adjuvant BC treatment in the foreseeable future. Second, overall median survival from diagnosis of mBC is much longer than that of aNSCLC (approximately 24 months and 10 months, respectively), with patients exposed to many more lines of systemic therapy.7-11 Real-world studies have shown that an increasing number of patients with mBC receive more than 5 lines of therapy.6 In a retrospective analysis, the proportions of patients with BC receiving fifth, sixth, and seventh or greater lines of therapy in 2007 were 15.8%, 8.2%, and 5.1%, respectively, which increased to 28.2%, 18.7%, and 12.3% in 2010.6 These patients derived a clinical benefit, with each subsequent line extending their overall survival by 8.7, 8.2, and 7.5 months in the fifth, sixth, and seventh lines of therapy, respectively.6 The fact that chemotherapy is foundational to the neoadjuvant, adjuvant, and metastatic treatment of BC, as well as its use in combination with targeted and immuno-oncology approved drugs, would suggest that current and future patients with BC will be receiving multiple lines of systemic chemotherapy for many years to come. However, could the scientific and regulatory processes that have expedited the changes in the guideline treatment of aNSCLC alter the chemotherapy paradigm much sooner than history would predict?

Chemotherapy Over the Next 5 Years

Expedited drug approval processes (eg, Accelerated Approval Program, cohort expansion trial design, tumor-agnostic mutational drug indications), in conjunction with policy initiatives, are revolutionizing drug development. What had been a historical benchmark of 12 years to navigate phase 1 to 3 trial completion and FDA approval has, in recent years, been slashed to half that duration. What does this rapid pace of change herald for traditional cytotoxic chemotherapy? A review of BC trials in progress may shed some light. A ClinicalTrials.gov search of all actively recruiting US clinical trials of pharmacologic interventions in mBC was conducted on September 20, 2018. There were 311 identified trials: 146 included a chemotherapy component, with 91 including chemotherapy in combination with a novel agent. In comparison, 27 studies were of CDK 4/6 inhibitor therapy without chemotherapy. Phase 3 studies consisted of 18 evaluating CDK 4/6 inhibitors, 13 evaluating chemotherapy in combination with a novel agent, and 7 comparing chemotherapy with a novel agent. A similar search of phase 3 trials of actively accruing adjuvant BC trials found 26 studies: 15 involving chemotherapy, with 8 using chemotherapy in the experimental arm, both alone and in combination with targeted and immunologic drugs. The extent to which chemotherapy remains a component of mBC research leaves little doubt as to its critical role for years to come.

The development of precision medicine approaches in the treatment of advanced malignancy has dramatically altered the management and outcomes of patients with cancer. Despite the rapid advances of science and improved regulatory processes that are allowing those advances to move from bench to bedside in as little as 3 to 5 years, chemotherapy remains a critical component of solid tumor and hematologic malignancy treatment today and likely for years to come. We chose to illustrate this with an exploration of the development of systemic therapies for BC, given its history as a field that has heralded many of the hallmarks of modern cancer treatment. A similar case could have been made for researching treatments of many of the most common and lethal cancers: colorectal, ovarian, and even lung. Although effective, the current arsenal of chemotherapeutic interventions presents its own particular set of patient-centric challenges due to the agents’ impact on quality of life, their limited efficacy, and their significant adverse effects. However, despite this and the explosion in targeted and immunologic therapy approvals, as well as the ongoing research that will likely extend their number and indications, research on traditional systemic cytotoxic drugs should not be abandoned. The end of the chemotherapy era is not near; chemotherapy will play a significant role in the treatment of mBC, among a host of other common cancers, in the years if not decades to come. Further research is warranted to understand the comparative effectiveness of the currently approved chemotherapeutic agents and to explore new agents with greater patient-centricity.

Download PDF: Reports of the Demise of Chemotherapy Have Been Greatly Exaggerated 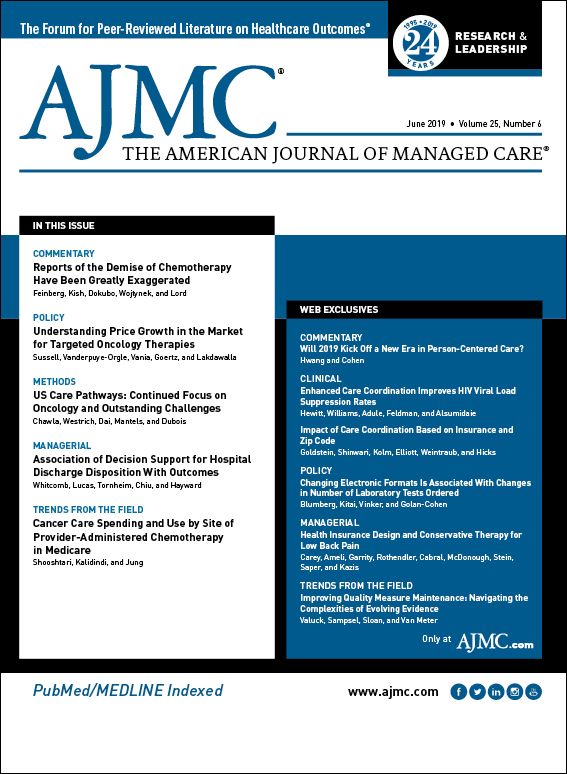 From the Editorial Board: Patrick H. Conway, MD, MSc
US Care Pathways: Continued Focus on Oncology and Outstanding Challenges
Association of Decision Support for Hospital Discharge Disposition With Outcomes
Cancer Care Spending and Use by Site of Provider-Administered Chemotherapy in Medicare
Understanding Price Growth in the Market for Targeted Oncology Therapies
Reports of the Demise of Chemotherapy Have Been Greatly Exaggerated
Health Insurance Design and Conservative Therapy for Low Back Pain
Improving Quality Measure Maintenance: Navigating the Complexities of Evolving Evidence
Changing Electronic Formats Is Associated With Changes in Number of Laboratory Tests Ordered
Enhanced Care Coordination Improves HIV Viral Load Suppression Rates
Will 2019 Kick Off a New Era in Person-Centered Care?
Impact of Care Coordination Based on Insurance and Zip Code
Related Videos
Related Content