Many large, well-integrated medical groups with infrastructure to manage care effectively continue to receive a majority of revenue from fee-for-service and pay physicians based on productivity.

Objectives: Little is known about the scope of alternative payment models outside of Medicare. This study measures the full complement of public and private payment arrangements in large, multi-specialty group practices as a barometer of payment reform among advanced organizations.

Study Design and Methods: We collected information from 33 large, multi-specialty group practices about the proportion of their total revenue in 7 payment models, physician compensation strategies, and the implementation of selected performance management initiatives. We grouped respondents into 3 categories based on the proportion of their revenue in risk arrangements: risk-based (45%-100%), mixed (10%-35%), and fee-for-service (FFS) (0%-10%). We analyzed changes in contracting and operating characteristics between 2011 and 2013.

Results: In 2013, 68% of groups’ total patient revenue was from FFS payments and 32% was from risk arrangements (unweighted average). Risk-based groups had 26% FFS revenue, whereas mixed-payment and FFS groups had 75% and 98%, respectively. Between 2011 and 2013, 9 groups increased risk contract revenue by about 15 percentage points and 22 reported few changes. Risk-based groups reported more advanced implementation of performance management strategies and were more likely to have physician financial incentives for quality and patient experience.

The groups in this study are well positioned to manage risk-based contracts successfully, but less than one-third receive a majority of their revenue from risk arrangements. The experience of these relatively advanced groups suggests that expanding risk-based arrangements across the US health system will likely be slower and more challenging than many people assume.

Under the Affordable Care Act (ACA), the federal government has implemented new initiatives to hold medical groups and health systems accountable for the cost and quality of care. As of January 2016, 434 organizations, covering 7.7 million beneficiaries, were participating in the Medicare Shared Savings Program (MSSP).1 Forty-three groups—about 1.2 million beneficiaries&mdash;were in the Pioneer Accountable Care Organization (ACO), Next Generation ACO, and Comprehensive End Stage Renal Disease Care Model, where participants bear financial risk if their spending exceeds a defined budget target. The federal government is accelerating its efforts and has announced a goal of moving 50% of Medicare payments into alternative payment models by 2018.

Medicare payment reforms have grown rapidly, but their ability to create systematic change in healthcare delivery that leads to better quality and lower cost will be limited without complementary efforts by private payers.2 Thus far, private payment reforms have evolved more slowly. According to one estimate, private-sector ACO contracts now cover 17.2 million individuals,3 which represents about 8.5% of the population covered by private insurance. Relatively little is known about financial arrangements in private accountable care programs, although a recent survey found that about half of ACOs had contracts with private health plans and about half of those contracts included some financial risk.4

In 2013, we set out to collect information about the full complement of public and private contracting arrangements for a subset of large, well-organized medical practices with employed physicians. Such organizations have demonstrated an ability to control spending and deliver high-quality care relative to other providers in their markets.5-7 We sent a detailed questionnaire to the medical groups affiliated with the Council of Accountable Physician Practices (CAPP). The groups reported the proportion of their total patient revenue paid through 7 distinct payment models (fee-for-service [FFS], pay-for-performance, episode payment, partial capitation, shared savings, shared risk, and global capitation). They also provided information about physician compensation arrangements, information management capabilities, and programs to improve quality and lower spending.

Although the groups in this study are larger and better integrated than physician organizations nationally, this study makes several unique contributions. First, it reports on payment methods across all public and private payers as a share of each organization’s total patient revenue—information that is not available elsewhere in the literature. One recent study reported on the characteristics of the largest private health plan contracts in a national sample of ACOs4; however, organizational decisions and investments depend on financial incentives across the full portfolio of medical groups’ revenue sources. Second, as health systems enter risk-based arrangements, their success will be influenced by how new financial incentives are conveyed to physicians. This study profiles how physicians were paid in large employed medical groups and how compensation models changed between 2011 and 2013. Finally, we report on changes in payment arrangements and internal performance management programs before and after the start of MSSP and the Pioneer ACO program. Despite not being nationally representative, this analysis of “advanced” medical groups provides one barometer of how the nation’s payment reform efforts are proceeding.

We defined risk-based contract revenue as all payments made to groups based on full- or partial-capitation, shared-risk, episode-payment, and shared-savings arrangements. FFS revenue includes straight FFS and FFS with pay-for-performance incentives. Shared savings revenue could reasonably be included in the FFS category, but we included it as risk-based revenue because it creates financial incentives for groups to manage spending growth as opposed to only improving quality of care.

About 45% of the groups serve patients enrolled in a health plan that they or a parent health system own. The executives we interviewed viewed the arrangement as equivalent to capitation because the overall organization was at risk; consequently, we classified payments from affiliated health plans as risk-based payments.

The groups vary in size, geographic location, and degree of integration with other healthcare facilities (see , available at www.ajmc.com). The median group employed 406 full-time employed physicians, and about 40% of employed physicians were in primary care. Eighteen groups (55%) belonged to delivery systems that included hospitals. Fifteen (45%) had affiliated health plans, and 11 (33%) were not formally affiliated with hospitals or health plans.

Risk contracting. The 33 groups received about two-thirds of their total patient revenue from FFS payments (unweighted average) and 16% from global capitation

Specialist compensation was 92% production-based in FFS groups, 74% in the mixed-payment groups, and 57% in risk-based groups. About 4.5% of specialist pay was tied to performance metrics versus 8.5% for PCPs.

Information management. Groups reported their stage of implementation for selected information management tools on the following scale: 1) none, 2) planning underway, 3) partially implemented, and 4) fully implemented. All of the groups reported having electronic medical records, and about 80% reported full implementation of a common system across their organization. Risk-based groups were more likely than other groups to report full implementation of decision-support tools, including systemwide data warehouses (80%), disease registries (50%), practice variation analysis (50%), and clinical guideline reminders (70%) (Table 2).

Quality and cost management. The groups reported progress implementing 14 types of quality and cost management programs based on the following scale: 1) no progress, 2) planning underway, 3) just getting started, 4) far along, and 5) advanced. Table 2 shows the proportion of each group category reporting that they were far along or advanced for each of the 14 programs.

Mixed payment groups reported implementation levels similar to risk-based groups in care process redesign and prescription drug management. They were further along than the FFS groups in readmission reduction initiatives, high-risk care management, and programs to reduce “leakage” of their primary care patients to nonaffiliated hospitals and specialists.

Thirty-one groups reported payment model information for 2011, 2012, and 2013. We also analyzed changes in compensation, information management, and cost and quality management programs for 20 CAPP groups that completed questionnaires in both 2011 and 2013.8

Four of the 9 “movers” already had substantial risk in 2011, and the bulk of their new risk revenue came from joining the MSSP or Pioneer ACO program. The other 5 began primarily as FFS groups in 2011; most of their new payment arrangements were commercial shared savings contracts with limited downside risk.

Changes in information management capability. The proportion of groups reporting that they had fully implemented clinical guideline reminders, an enterprisewide data warehouse, and a disease registry increased measurably from 2011 to 2013; two-thirds of the progress was reported by “mixed payment” groups.

Changes in quality and cost management programs. The number of groups reporting that their program implementation was “far along” increased substantially across the 14 program categories between 2011 and 2013 (see eAppendix). Of groups reporting that they were considering or getting started with these programs in 2011, 40% to 70% (depending on the program) reported progress in 2013. The programs where the greatest number of groups advanced—care management and reducing treatment variation&mdash;are important for successful performance under risk contracts. Notably, by 2013, 16 of 19 groups reported that their high-risk care management program was far along or advanced.

The federal government’s goal of moving half of Medicare spending into alternative payment models by 2018 is ambitious. The pace of change will depend on the nature and scope of public and private payment arrangements currently in place, future models or model changes that make these programs more (or less) attractive, and provider system readiness. Very little systematic information about providers’ payment arrangements or capacity to manage risk-based contracts is currently available. This study provides more detailed information for a subset of advanced delivery systems as one view of the progress of payment reform.

Commercial insurers have announced plans to expand their value-based contracts to 50% or more of their total payments to providers.10 However, “value-based” is used to describe programs ranging from FFS with small quality incentive payments, to patient-centered medical home “care management” fees, to full risk contracts. Industry sources suggest that contracts with downside risk are rare in most areas of the country. Pay-for-performance, the most common form of value-based payment today, has been widely studied with mixed results.11

New global budget programs, in which providers bear substantial financial risk, have had positive initial results,12,13 but such programs are a minority of value-based pay initiatives and it is unknown whether they could be successful at a larger scale. CMS’ decision to continue the upside-only MSSP option through 2018 reflects a continuing reluctance of providers to take on risk.

These study results suggest the need for realistic expectations about the pace of payment system change. Most participating groups would be considered prototypical ACOs that are well positioned to succeed under risk-based arrangements. Nonetheless, two-thirds of their 2013 patient revenue came from FFS payments and only 16% from global capitation; moreover, although one-third of the groups received half or more of their revenue from risk-based contracts, another one-third were paid mostly by FFS. Additionally, only one-third added risk contracts between 2011 and 2013 despite new Medicare and private plan options.

Although many of these advanced groups have embraced payment reforms, those newer to risk-contracting appear more comfortable building infrastructure before taking on additional risk. The ACA has made payment delivery system reform top-of-mind for provider systems and health plans. Medicare’s ability to drive delivery system transformation will depend on how aggressively commercial health plans push risk contracts and whether providers will accept them. This is beginning to happen—but relatively slowly&mdash;at least through 2013. Ultimately, the experience of the advanced groups in this study suggests that expanding risk-based arrangements across the health system will likely be slower and more challenging than many people assume.

Source of Funding: The Commonwealth Fund.

Author Disclosures: Mr Mechanic is a member of the Atrius Health 501(c)(3) physician group and Medicare Pioneer ACO, a consultant for xG Health Solutions—a professional service firm&mdash;and previously was a consultant for the American Hospital Association. The consulting projects pertain to Medicare bundled payment and have no conflict of interest with the submitted work. 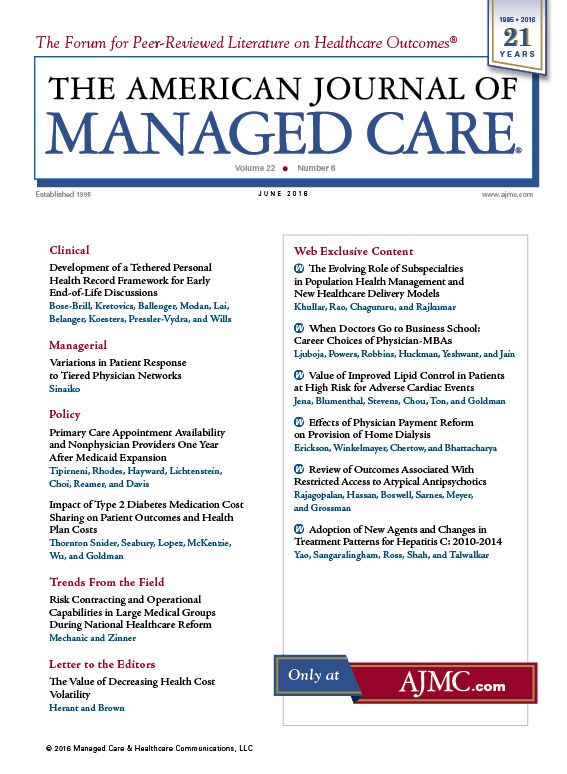