The federal sequester trims Medicare payments for cancer patients receiving chemotherapy in doctors’ offices in an effort to save the government money. Instead, it will end up costing more in the long run, according to the president of the American Society of Clinical Oncology (ASCO).

ASCO President Clifford A. Hudis, MD, said most community-based oncology practices that operate under the “buy-and-bill” system, in which providers purchase chemotherapy drugs for longer accept Medicare patients. Hudis pointed out that the results of this survey should be interpreted with caution, as it was voluntary in nature (ie, selection bias may be an issue).

The results of a separate survey of 326 practices by the Community Oncology Alliance do support ASCO’s findings, however. In addition, one-fifth of practices reported that they have reduced administrative staff, and two-fifths expected that they would do so should the cuts remain in effect through midsummer. Interestingly, 14% of practices surveyed indicated that they are now considering renewed discussions with hospitals to form closer relationships, including being acquired by them.

Intensive clinical research continues to be a force behind advances in cancer treatment. Sequestration seems to be affecting oncology clinical research at the national level and local level. As part of sequestration, the National Institutes of Health (NIH) took on-site treatment and then bill Medicare, cannot afford to absorb the cuts imposed under the Budget Control Act of 2011, popularly known as the “sequester.” So, Hudis and others told Evidence-Based Oncology, these providers have been forced to refer patients seeking certain chemotherapy treatments to hospitals, where reimbursements—and costs to Medicare&mdash;are greater. It is not yet known how much this practice is costing the federal government.

“This is one of the true disappointments of the whole sequester—it’s converting lower total costs associated with physician office care into higher costs incurred at the hospital-based setting,” Hudis said. “It’s going to significantly increase the cost of delivering the same care while making it frequently less convenient.”

“It’s quite an amazing paradox,” he said.

Since the financial sequester took effect in April, medical providers, patients, and health plan administrators have worked to adjust to both immediate and long-term implications. The picture in cancer care has many aspects: There are effects on patients undergoing care, and there are effects on research into new treatments for future patients. While other areas of the federal government sustained deeper cuts by the Budget Control Act, Medicare payment cuts were limited to 2%. This applies to payments to Medicare Advantage plans and providers while also affecting physicians who purchase part B medications, administer them onsite, and seek reimbursement from Medicare (referred to as “buy-and-bill”). A 2% cut may not sound like much, but it is having alarming effects.

The already-slight margins on office-based infusible products means that oncology practices are making extremely difficult decisions regarding whether to continue providing infused chemotherapy to their patients. For some, the choice involves whether to continue treating these patients or lose money on their medications. “If we treated the patients receiving the most expensive drugs, we’d be out of business in 6 months to a year,” according to Jeff Vacirca, chief executive of North Shore Hematology Oncology Associates in New York.1 He told the Washington Post, “The drugs we’re going to lose money on, we’re not going to administer right now,” noting that Medicare beneficiaries comprised more than half of his practice.

The result, according to Hudis and other clinicians, is that patients are being directed to hospitals or clinics to receive the treatments, with the result being greater expense to Medicare. A study by Milliman, the actuarial consulting firm, estimates that chemotherapy given in a hospital costs on average $6500 more annually than chemotherapy provided in a community-based location.2

Furthermore, the question arises as to whether hospitals can handle the increased load: In 2011, Milliman found that 33% of patients were receiving their chemotherapy in a hospital setting. This may actually be exacerbating a trend toward administering chemotherapy in hospital-based outpatient centers. A study of fee-for-service Medicare data found that this shift has been continuing since the implementation of average sales price (ASP) pricing.br /> Preliminary results from a study by the Moran Company revealed that in 2005, fully 87% were receiving chemotherapy in physician offices compared with just 13% in hospital settings.3

William T. McGivney, PhD, principal of McGivney Global Advisors, stated, “Sometimes, federal government policies are ‘misdirected.’ The sequestration cuts in reimbursement for oncologic drugs and biologics (therapeutic and supportive care) fall into a new category of ‘undirected misdirection.’ ” McGivney, the former CEO of the National Comprehensive Cancer Network (NCCN), added, “Gaps in current federal reimbursement levels for oncologic agents have been amplified by the sequestration cuts, and this, in turn, has exacerbated an already difficult situation into one that jeopardizes patient access.”

When clinics and physicians purchase chemotherapies for administration at their facilities, they had been receiving reimbursement of the ASP of the agent plus 6%. According to ASCO, the sequestration has reduced this reimbursement effectively to ASP plus 4.3%. This change is enough to erase their small margins and put their practices into the red, especially when purchasing expensive infusible products. This is driving oncologists and their practice administrators to advise patients that they are no longer providing chemotherapy at their offices.

A survey of 500 oncologists by ASCO revealed that close to one-half were “no longer able to continue caring for Medicare patients unless they had supplemental insurance.”4 The survey, completed in May 2013, also specified that 50% of practices were reportedly sending their Medicare patients who need chemotherapy to hospital outpatient infusion centers (Table). A total of 14% reported that they no longer accept Medicare patients. Hudis pointed out that the results of this survey should be interpreted with caution, as it was voluntary in nature (ie, selection bias may be an issue).

The results of a separate survey of 326 practices by the Community Oncology Alliance do support ASCO’s findings, however. In addition, one-fifth of practices reported that they have reduced administrative staff, and two-fifths expected that they would do so should the cuts remain in effect through midsummer. Interestingly, 14% of practices surveyed indicated that they are now considering renewed discussions with hospitals to form closer relationships, including being acquired by them.

Since NIH is a major source of funding for drug trials, this will certainly result in fewer cancer drug therapy investigations over time, and possibly, slower delivery of oncology medications to the FDA for drug approval.5

Patients participating in active clinical trials may be especially hard hit in less-populated areas. In areas with few cancer treatment centers, there may be no option for those patients if their treatment center decides to turn away patients—any facility participating in a clinical trial must be individually approved. That patient may be forced to go across state lines to continue in the trial at an approved facility.

In clinical trials, the chemotherapy under investigation is usually provided to the patient free of charge, but this may not be the case with supportive or ancillary therapies for their care. From a practical view, Hudis believes that less will seem different at the community level than meets the eye. “The community is so dedicated to doing clinical trials, and frankly has a history of doing clinical trials even when they represented a financial loss,” Hudis explained, “that most patients are likely to keep getting their care in studies that are ongoing. So the impact of this could arguably not be fully appreciated for many months to years—new trials are not started, and the old trials that close aren’t replaced.”

A Fix in the Works?

It is expected that the next federal budget will address the current across-the-board cuts, retaining much of the savings obtained through the sequestration. The situation compelled some legislators to take immediate action. Marilyn B. Tavenner, CMS administrator, responded to a request by more than 100 legislators to avoid chemotherapy reimbursement cuts, replying on June 3, “The Department of Health and Human Services assessed whether the law allows discretion to administer the sequestration reductions in a manner that is different from the across the board approach that has been used to implement it. We do not believe that we have the authority under the Budget Control Act of 2011 to exempt Medicare payment for Part B drugs.”6

Since CMS does not believe that it has the authority under the Budget Control Act to decide where cuts can be avoided, congressional intervention will be necessary to effect a change in the law. A bill introduced by US Rep. Renee Ellmers (R-NC) has received bipartisan support in the House, capturing 101 co-sponsors by late July. The legislation, the Cancer Patient Protection Act of 2013 (H.R. 1416), would exempt chemotherapy from the 2% cut in payment. It has been referred to the House Budget Subcommittee on Health.7

In an interview with Evidence-Based Oncology, Ellmers said, “What’s needed is momentum and public awareness. Many members were waiting to hear from CMS before they would agree to a legislative fix. Now that CMS has responded and said they will not act, members of Congress know the ball is in their court.” Ellmers continued, “Furthermore, support for this bill has been enhanced by evidence from oncologists across the country that they are sending patients to the more expensive hospital setting because of CMS’s application of the cuts.” She has seen negative effects in her own district, spurring her to act. “I have heard from numerous oncologists and cancer centers throughout the second district of North Carolina,” she stated. “They have reported that, already facing small profit margins, their centers are concerned that CMS’s application of these cuts will put them out of business.

“I have also heard from the Blood & Cancer Clinic in Fayetteville, North Carolina. They have had to send several patients to the local hospital. This is unfortunate because most of the patients have received several treatments in their office already, but are now suddenly forced to transfer to the hospital. Their patients are very frustrated. Most of them are sick and would benefit from staying with their clinic,” according to Ellmers. This would be a welcome change in attitude, based on ASCO’s initial meetings on Capitol Hill. Hudis stated, “The last time we actually spoke with representatives and senators about the impact of the sequester, we pointedly highlighted the exemption that they carved out for the air traffic controllers and the FAA. Our arguments, though, seemed to fall on relatively deaf ears.”

“The near-term probability of relief, legislative or regulatory, seems modest,” McGivney told Evidence-Based Oncology. “Thus, providers likely will to have to deal with staying afloat as the delivery/ payment system remains awash in cuts, mandates, and change. 1. Kliff S. Cancer clinics are turning away thousands of Medicare patients: blame the sequester. The Washington Post, April 3, 2013. 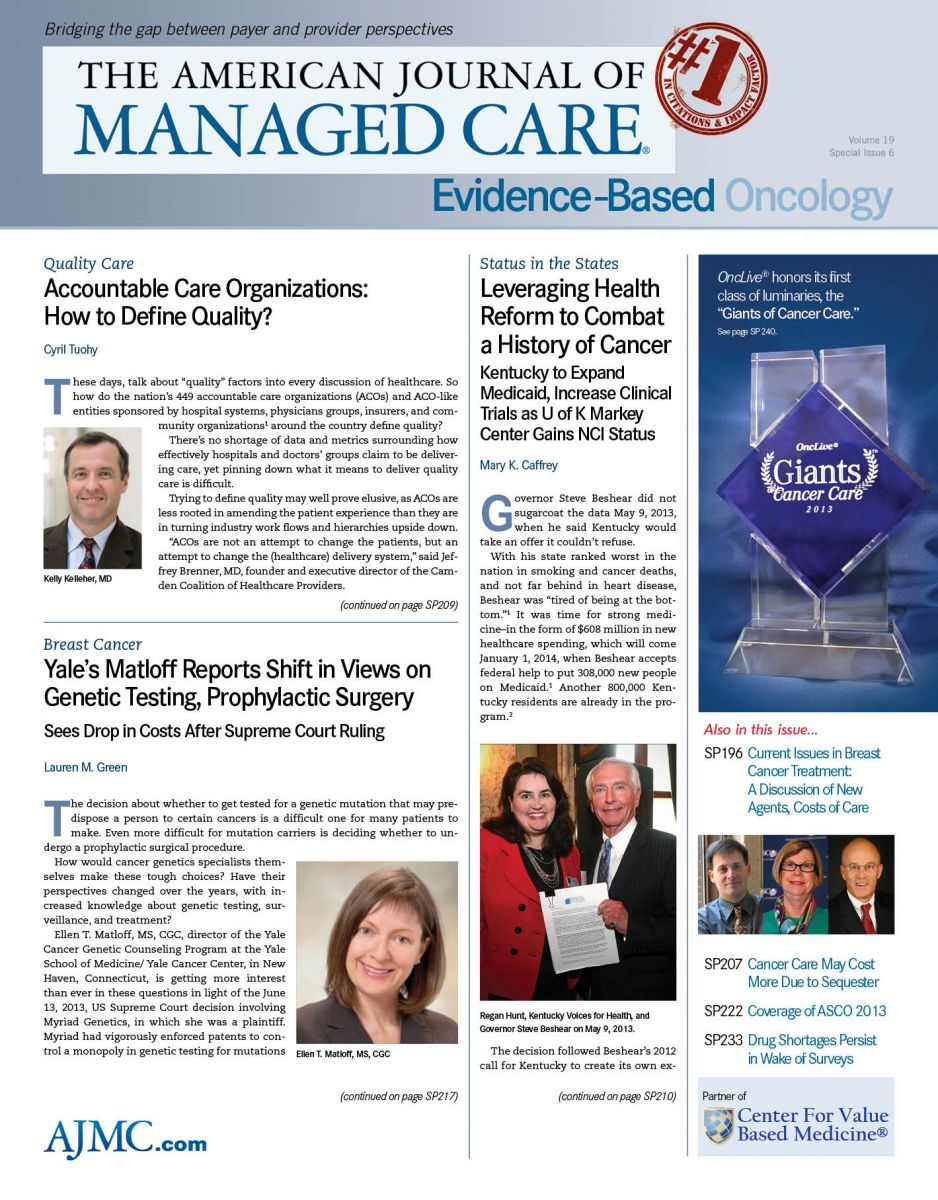