Key stakeholders involved in the delivery of cancer care in New Jersey discuss strategies driving innovation in oncology and remaining challenges impeding their integration at the 70th Annual Roy A. Bowers Pharmaceutical Conference.

In recognizing the value-based aspects that drive patient outcomes within oncology, effective cancer care has been redefined in New Jersey to incorporate cost and health equity at the forefront of innovation. Telehealth, in-home care, and biosimilars have all emerged as potential solutions to reduce rising financial toxicity and access concerns in oncology, but there remains a significant need for collaboration and aligned strategies to optimize population health, noted stakeholders during the 70th Annual Roy A. Bowers Pharmaceutical Conference: Innovation through Crisis—Redefining Health Care Delivery.

At the last panel discussion of the conference, held Monday through the Ernest Mario School of Pharmacy at Rutgers, The State University of New Jersey, Edward Licitra, MD, PhD, chairman and chief executive officer, Astera Cancer Care, opened the conversation by acknowledging the utility of the recently ended Oncology Care Model (OCM) in showing the level of sophistication needed to address common (dehydration, chemotherapy-related toxicity) and complex (reimbursement, social determinants of health [SDOH]) issues for patients through a personalized manner.

Astera first collaborated with Horizon to create an episodic care plan for patients with breast cancer, and now, Licitra said, there are 18 different programs that have been launched by his organization in oncology overall. Along with bundled payment models, he said that services typically not reimbursed by fee-for-service Medicare, such as next-generation sequencing, are also being offered to some beneficiaries.

“We think that we can actually roll up at least 50% of cancer under prospective episode-based payment arrangements, which we think then kind of integrate with value-based care programs and population health initiatives that will allow us to provide services to these patients, including home health services, and then ultimately control the cost of care for the provider, patient, and payer,” he said.

Steven K. Libutti, MD, FACS, director, Rutgers Cancer Institute of New Jersey, added that use of bundled payment also has potential in palliative care, or as he described it, “supportive care.”

Episodic plans are typically provided to patients with early stage disease, in part due to the minimal variance seen for these disease types. But introducing these payment models to patients at more advanced stages of disease can have a significant impact on quality and cost, Libutti said, as there is often reluctance among care teams to move to supportive care.

He noted that extending the continuum of care to start when a patient first begins treatment to when there are no more viable therapeutic options left to consider can prove especially beneficial for providers, payers, and other care team members, who may have difficulty recognizing when treatment options are exhausted, and that turning to supportive care is ultimately the best option.

“At some point, going to fourth-line therapy may not be in the patient's best interest and understanding that and making a plan early on with the patient—how far the journey is going to go and what they may need towards the end of the journey if we're not achieving the goals that we had all hoped for—I would love to see us flesh that out more as a part of these bundles,” said Libutti, who also serves as vice chancellor for cancer programs at Rutgers Biomedical and Health Sciences and senior vice president for oncology services at RWJBarnabas Health.

In oncology care overall, clinical trials are also a cost-effective alternative to provide standard of care at a lower cost than would be typically associated with those therapies. Findings of an analysis by Tennessee Oncology that looked at the price of care for patients across 8 different malignancies who had Medicare as part of the OCM showed that those who were placed into a clinical trial exhibited an 18% reduction in episode costs compared with participants who were given regular standard of care.1

Payer partnerships, along with the bundled payment models, are also key to covering the costs that would otherwise be placed on the patient, infusion center, and private practice, said Libutti, and increased integration of clinical trials can also reduce the use of third and fourth line “desperation agents” that contribute to waste.

“Not that it's easy, but it's one of those things that if you have an organization that can put a relatively high percentage of patients on trial, I think you should be rewarded for that, because I think that there's benefits that are approved to patients and also payers,” said Licitra.

With the standard of care drug in oncology ranging from $15,000 to $20,000 a month, Michael P. Kane, RPh, BCOP, executive director, Oncology Services, Rutgers Cancer Institute of New Jersey, RWJBarnabas Health, noted that improving the eligibility criteria for clinical trials is key as it often excludes the types of patients who typically present at the clinic.

“I would love that population input to say, 'Hey you have this exclusion criteria for diabetes—why is that when half the patient population have this disease?'” said Kane.

Even in cases where there is agreement on the optimal therapy for a given patient, he stressed that they will still get denials when seeking approval from insurance as the drug may not be part of clinical benchmarks, such as established recommendations by the National Comprehensive Cancer Network.

“So how do we bridge those patients from something that doesn't have approval compendium, isn't part of their payer policy yet, but we know it's best care? What I think would be a better model is if you're going to receive a drug in that fashion, there has to be a way to capture the data to learn whether it was worthwhile.”

Financial navigators and social workers were other essential resources mentioned by Kane to address the financial toxicity related to care, as well as SDOH issues outside of the clinic, including cost of living, transportation, and food expenses.

“I think the most impactful thing that we can do is to continue to have the modalities for frequent touch points for the patients. That's everything from telemedicine to remote patient monitoring to apps, because I think all of those things drive better outcomes, control cost, and improve efficiency,” said Licitra.

“One of the biggest concerns I see in my own health system, and this refers to the unwillingness to get rid of old ideas, is the fact that somehow these technologies put a barrier between you and your colleagues or you and your patients. And I don't think that's true. I think it's about implementation,” added Libutti.

“Wouldn't it be great to have real-time monitoring of some of the things that are going on with your patients so you're not waiting every week or every month to find out how they're doing on their agent or how they're doing in terms of the side effects of toxicity. If I had a blank check, I would invest it in proper implementation of those technologies.”

Announced during the meeting by Libutti and Saira Jan, MS, PharmD, vice president and chief pharmacy officer of Horizon Blue Cross Blue Shield of New Jersey (BCBSNJ), a pilot launched as partnership between Horizon BCBSNJ and Rutgers CINJ/RWJBarnabas aims to move infusion oncology treatments from the clinic to the home setting for eligible RWJBarnabas Health patients.

Along with minimizing patient travel and potential exposure to COVID-19, the Oncology Home Infusion Model seeks to develop innovative benefit design to ensure cost-effective health care delivery for patients while maintaining high quality of care in the home environment. 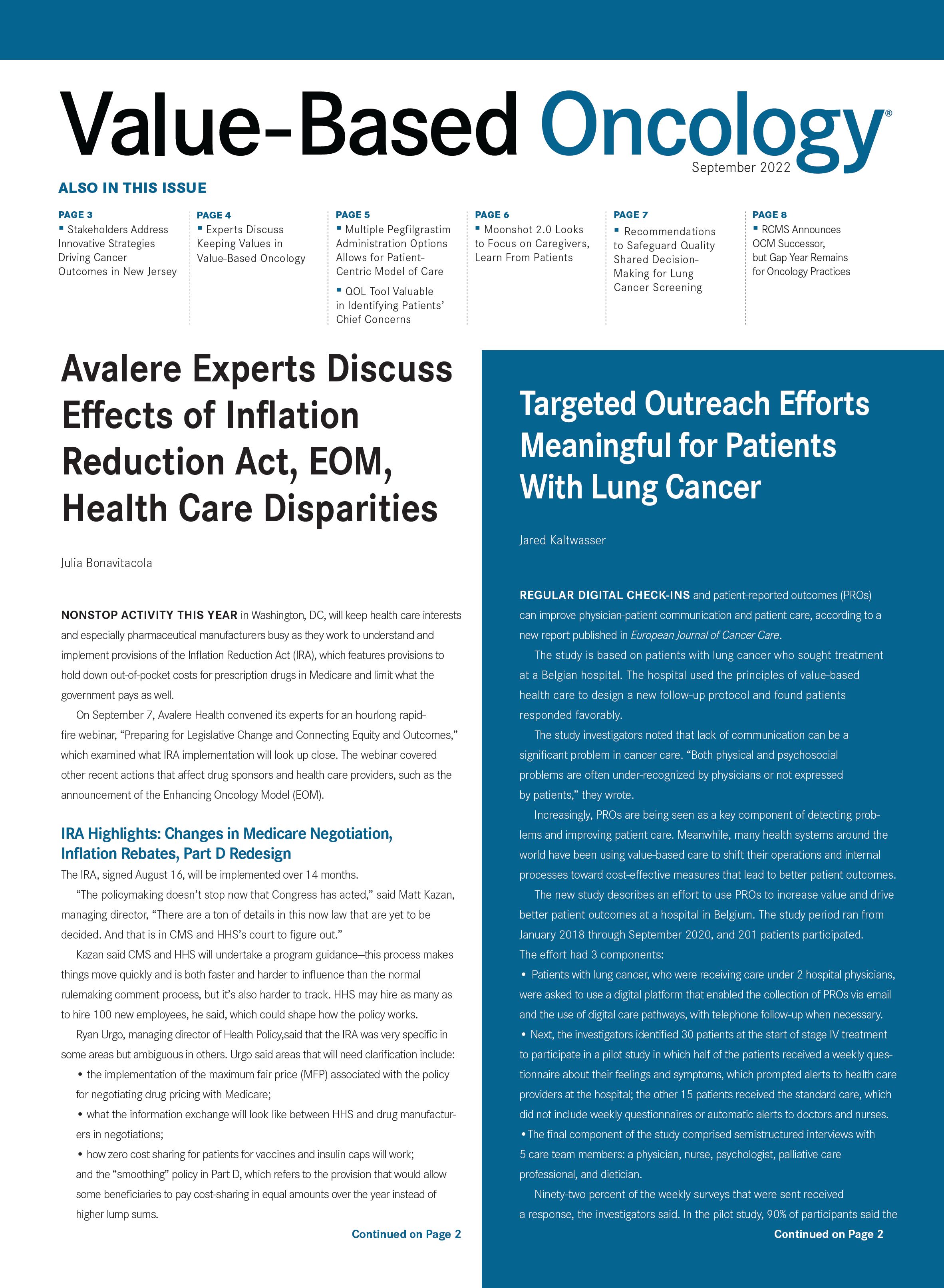 The long time to diagnosis is consistent with data pointing to pulmonary arterial hypertension (PAH) often being misdiagnosed as asthma, said the researchers, adding that the findings from their retrospective study provide valuable insight into where the diagnostic pathway lags.