The Relationship Between Provider Age and Opioid Prescribing Behavior

Holding other factors constant, the authors find that older providers prescribe significantly more opioids, with the gap between older and younger providers increasing from 2010 to 2015.

Methods: We use regression analysis to estimate the effect of provider age, holding other factors constant.

Results: We find that older providers prescribe significantly more opioids, with the gap between older and younger providers increasing from 2010 to 2015.

Conclusions: Assuming that older physicians follow patterns of previous generations, anticipated retirement of older providers and entry by younger providers will tend to reduce opioid volumes, undoing at least in part the rapid increase since 2000.

The increase in the volume of opioids prescribed and the harms from opioid use over the past 2 decades are well known.1,2 Evidence indicates that provider behavior has played a key role in expanding opioid use (we refer to prescribers of opioids as providers, which includes physicians, nurse practitioners, and physicians’ assistants) and that at least some of this expansion is medically inappropriate.3

Provider age might be an important determinant of opioid prescribing behavior for several reasons. On one hand, older providers’ greater experience might lead them to write fewer inappropriate opioid prescriptions.8 On the other hand, evidence suggests that older physicians can be less likely to adhere to and be aware of current evidence-based standards of care, such as the recommendation to use episiotomy only in limited circumstances.9 (Episiotomy is a surgical procedure to enlarge the vaginal opening during childbirth. Episiotomy was used routinely into the 1990s, but has since been shown to be clinically beneficial only in limited circumstances.) Other work has found that older primary care physicians have higher rates of use of low-value services10 and higher mortality of patients treated in the hospital.11 To the extent that at least part of the expansion of opioid prescribing was not medically appropriate, this work would predict a positive association between provider age and opioid prescription volume.

To investigate whether opioid prescribing behavior differs by provider age, we analyze prescription drug claims from a 20% random sample of Medicare Part D beneficiaries in 2010 and 2015. Using the methods described below, we calculate for each provider the number of days supplied of opioids they prescribed per attributed patient, along with several other measures of the intensity and appropriateness of opioid prescribing. We examine whether these measures vary across providers of different age cohorts, adjusted for the characteristics of the providers and their patients. Then, we create illustrative forecasts of opioid prescription volume for each age cohort of providers in 2020 and 2025 under different assumptions about cohorts’ future prescribing behavior, and aggregate to the population of providers, in order to provide insights into the effects on the overall future volume of prescribed opioids that could be possible based on our estimates. Our forecasts are not intended to represent what will actually occur in the future. Instead, they are intended to represent what would occur under simple assumptions about trends in provider and prescribing behavior, in order to illustrate how these factors might contribute to future opioid volume.

We match each provider in the sample by National Provider Identifier (NPI) to records in the Medicare Provider Practice and Specialty file (MD-PPAS) to obtain the provider’s age, gender, and 62-category specialty. We match each provider by NPI to records in the National Plan and Provider Enumeration System (NPPES) to obtain county of practice. We limit our analysis sample to those providers with valid age, gender, and location information in MD-PPAS and NPPES who were aged at least 30 years in 2010 or 2015. We assign providers to nine 5-year age cohorts: 30 to 34, 35 to 39, 40 to 44, 45 to 49, 50 to 54, 55 to 59, 60 to 64, 65 to 69, and 70 years and older. We also present the full distribution of provider ages in the eAppendix.

To determine the relationship between provider age group and opioid prescription patterns, we estimate regressions across providers, by year, of days supplied of opioids per attributed patient on a set of indicator variables for the characteristics of each provider and their patients. Provider characteristics include age cohort; gender; specialty; county of practice; and patients’ age cohort, gender, race, and eligibility status mix.

We provide the full set of regression results, and the mean and SD of each variable, in the eAppendix. We calculate the adjusted days supplied per patient for each provider age cohort in a given year as the predicted value of days supplied per patient at the sample average of all the indicator variables in the regression (except those for provider age cohort).

The Table aggregates the age-specific results presented in Figure 1. The first row of the Table shows that, for the average provider, actual days supplied per patient decline from 2010 to 2015 by approximately 9%, from 9.5 to 8.6. The second and third rows of the Table show that, at the 2015 age distribution of providers, forecast 2020 days supplied per patient would decline between approximately 8.6% and 9.1%. The 2 methods forecast continuing declines in days supplied through 2025 because of continuing retirements that lead to the effective replacement of older higher-prescribing providers with younger providers.

We examine 2 other measures of the intensity of opioid prescribing to validate our main result: the regression-adjusted count of opioid prescriptions per patient and mean daily dose in MME per prescribed day. The results of these analyses, presented in the eAppendix, show the same pattern across provider cohorts and over time as do days supplied.

Other analyses of inappropriate prescribing show a significant gradient across provider age cohorts. For example, in 2015, whereas 4.8% of patients with an opioid prescription from the average provider aged 30 to 34 years had an overlapping benzodiazepine prescription from that provider (regression adjusted), 10.2% of patients with an opioid from the average provider 70 years or older had an overlapping benzodiazepine—more than double the level (Figure 2). (Because benzodiazepines were not covered by Part D in 2010, we calculate only the 2015 rate of opioid/benzodiazepine overlap.)

In addition, although the count of high-dose opioid prescriptions per patient declined dramatically from 2010 to 2015 (from 0.093 to 0.057, or by 38.7%), the provider age gradient remained substantial. In 2015, whereas providers aged 30 to 34 years wrote 0.027 high-dose opioid prescriptions per patient on average, providers 70 years and older wrote 0.088—more than triple the level (Figure 3).

The provider-age gradient in opioid prescribing is also present for other pain relievers. For example, in both 2010 and 2015, the average provider aged 30 to 34 years prescribed approximately 3 days of NSAIDs per patient, rising to approximately 5 days for providers aged 50 to 54 years and 6 days for providers 70 years and older (Figure 4). Although the provider-age gradient in gabapentin/pregabalin prescribing is less pronounced, particularly in 2010, older providers prescribe more of these drugs as well (eAppendix).

Medically inappropriate use of opioids in the United States is an important social problem, and provider prescribing behavior plays a key role. However, no work has investigated the association between opioid prescribing and provider age. This gap is surprising, as other work has found less adherence to evidence-based standards of care and lower-quality outcomes on average for older providers compared with their younger counterparts. Extended to the context of opioid prescriptions, such work suggests that a disproportionate share of opioid overuse could be attributable to the prescribing behavior of older providers.

We took an additional step to further investigate whether the observed difference in opioid volume by provider age is due to unobserved differences in patients’ health. The Medicare Fee-for-Service (FFS) Provider Utilization and Payment Data Part D Prescriber Public Use File (PUF) reports the mean Hierarchical Condition Category (HCC) risk score for each provider serving Part D beneficiaries. These PUFs exist for 2013 to 2017 only. We reestimated the 2015 regression on which our estimates of adjusted differences in opioid volume by provider age are based including the providers’ FFS HCC score as reported in the PUF. When we did this, adjusted differences in opioid volume between younger and older providers actually increased, although by a relatively small amount (approximately 5%).

Second, our construction of the size of each provider’s patient panel based on Part D prescription drug data rather than other Medicare data could bias our results. If older providers are more likely to have patients with no prescribed medications, then our use of Part D data to construct panel sizes would lead us to understate older providers’ panel sizes and in turn overstate older providers’ days supplied per patient. However, this source of bias is unlikely to be important: Of the 39.5 million beneficiaries enrolled in Part D in 2015, 38.9 million (or 98.5%) had at least 1 outpatient prescription drug claim.16

Third, because our study population is disproportionately older, we cannot identify the extent to which the provider age effect accounts for trends in opioid prescribing in the younger population. Other work shows that the decline in opioid prescriptions in recent years was much greater for younger than for older patients.17 Differences between older and younger patients may be important, particularly in light of work showing a large recent decline in initial opioid prescriptions in the younger population,18 which could translate into even greater declines in overall opioid use in the future, given opioids’ addictive nature. Future work might seek to investigate this hypothesis, along with the mechanisms through which provider age affects prescribing behavior, in order to improve public policy.

The authors would like to thank seminar participants at Stanford University for helpful comments and Takaaki Sagawa for exceptional research support. All authors contributed equally to all aspects of the paper. 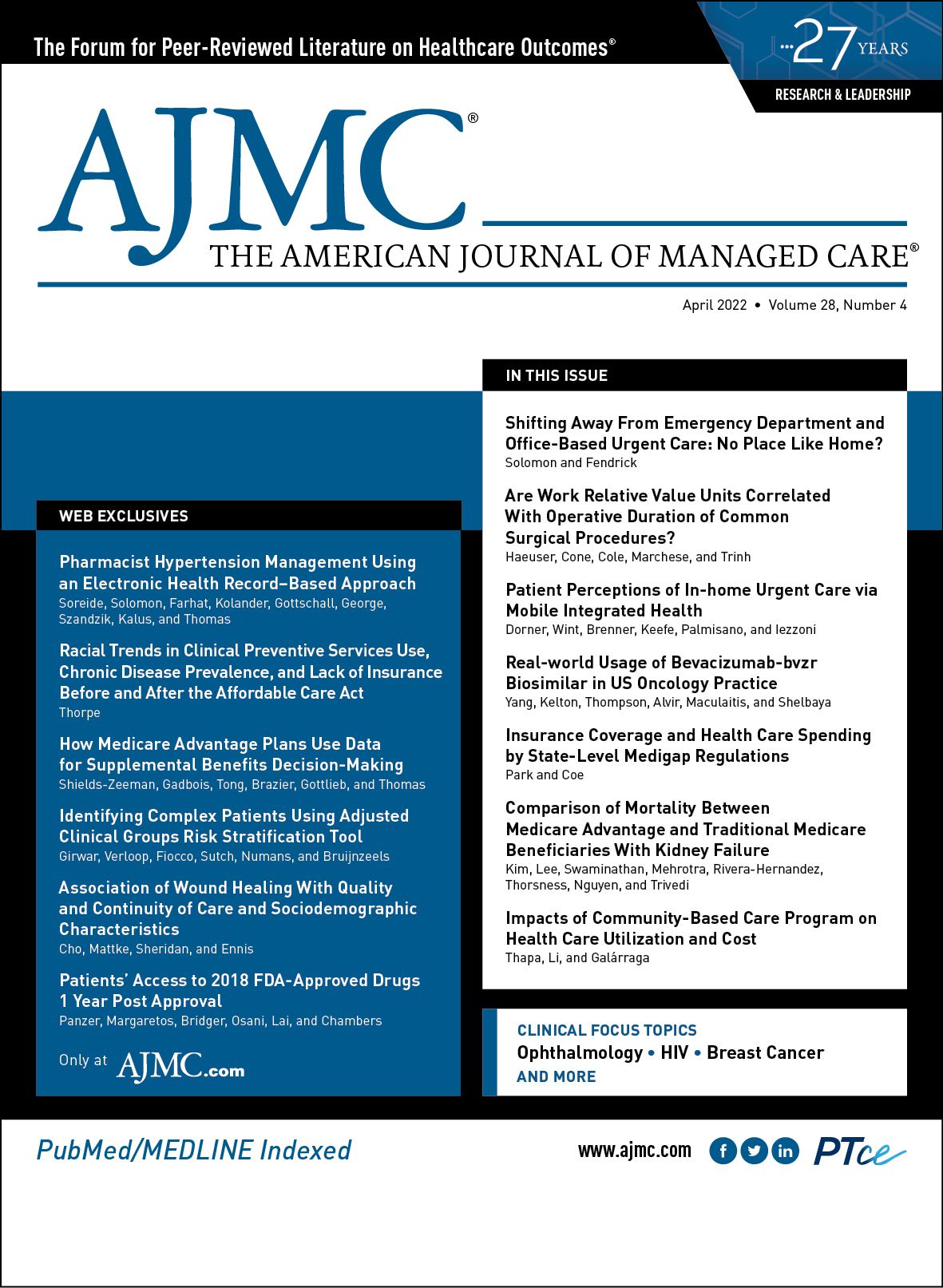 With greater attention being paid to the heterogenous patient population, researchers questioned whether this has resulted in a more diverse group of patients included in Parkinson disease (PD) studies in the Netherlands.

A study attempted to see how symptoms affect quality of life after adjusting for confounding factors.