How well is oncology research being integrated into clinical management of patients? How can it be done better?

Well, [in] my long, illustrious experience in oncology, I’ve sort of seen it all, and I think that in the late ’70s, ’80s, and I’ll even go into the ‘90s, so much of oncology development was empirical. We would take drugs off the shelf that essentially had been shown to damage DNA or showed some cytotoxic effects against the tumor cells and then we would bring that in an empiric way into the clinic. I think that sort-of almost unscientific approach explained at that time why things moved so slowly.

Why were we stuck on carboplatinum-taxol for ovarian cancer for so long? Because we were doing this, yet another cytotoxic agent from off the shelf, from the lab, into the clinic. That’s completely changed, and to answer the question directly, I think we’re bringing laboratory discoveries into the clinic in a much more efficient and rational way than we ever have in oncology. What I’ve seen change in the last 5 or 10 years has been just astonishing. And there’s multiple advantages of this. So first of all, the transit time is quick. Whereas it used to take 20 years to develop a drug, we’ve now had some drugs approved in the phase 1 setting. That’s certainly true in lung cancer.

So, I can’t say that we’ve gotten it down to 3 to 5 years, but we probably are developing drugs effectively under the 10-year limit, which is half of what it used to be.

The second issue, [which is] really important for patients, and I tell my patients this, the science is so robust that when the drug gets into the phase 1 [trial], you now have a drug for which the chance of a success is high, the chance of efficacy is higher, and the chance of toxicity is lower.

So, I used to have an old adage. I’d tell my patients that I would never recommend them go for a phase 1 trial if it was outside of a 50-mile radius because traveling all that distance for something that was unlikely to work and maybe toxic wasn’t worth it. It’s completely changed now….

Now I have patients fly in for a phase 1 trial because it’s a novel combination, because there’s a lot of really interesting science behind it, and its chance of being successful is much higher than it was 10 or 15 years ago.Can you discuss the importance of reducing toxicity in the treatment of lymphoma? How does this affect patients’ overall health, in addition to quality of life?

I think in general, it’s really important to use the new drugs that we’re discovering that are targeted and to combine them intelligently with standard chemotherapy. Because we know that intensive chemotherapy regimens, while very effective in the first line for patients who have [a] short response or refractory disease, are generally not effective in later lines, unless you go to really high doses.

And most patients don’t tolerate this well, especially if they’re older or if they have significant toxicity. So, trying to take existing chemotherapy at lower doses and combine it with targeted strategies or immunotherapy is a way to both circumvent the higher toxicity of cytotoxic chemotherapy and rely on tumor biology to be smarter, rather than more aggressive, about targeting lymphoma.

There is a lot of research into predictive biomarkers in cancer. How well is that research making it into practices and actually being used with patients who can benefit?

It’s incredible what’s happened now with personalized therapy of cancer. Targeted therapy for lung cancer, we now have 8 or 9 different markers, which if you have them, different oncogenes can allow a physician to give their patient a targeted drug, which might have a response rate upwards of

50% with much less toxicity than chemotherapy.

These are being used, [but] the problem is some of the drivers are rather new, such as RET, NTRK, MET, and we’re still not in all places screening patients for these markers. So it’s going to be very important that people watching this, whether patients or physicians, ask, “Is the profiling test that’s being done at your center or your hospital, that you’re getting as a patient, including all the newest drivers for lung cancer?” Because only if you look for them can you then try to find the therapy either in your local providers office, or if not, since some of these agents are still rather new, there are clinical trials running at many sites.

The nice thing about 2019 is clinical trials really occur almost every place in the United States. So, these things are beginning to get into common practice. At my institution at Yale, we have a center in downtown New Haven, we have 12 to 13 sites around Connecticut, we’re making sure everyone uses the profiling system.

And then there have to be discussions. And things like this [interview] will help people to discuss and learn and understand the importance of these new markers and how to match for the right drug.You helped write the National Comprehensive Cancer Network (NCCN) Guidelines Insights for pancreatic adenocarcinoma. What was the treatment recommendation for these patients?

NCCN guidelines are a panel of experts in a particular field who gather together to analyze data and interpret them to help guide recommendations for how we manage and treat patients with a particular disease. I’m on the guidelines panel for pancreatic cancer. So, again, some of the specifics in terms of choices of chemotherapy and uses in the advanced or metastatic setting or the adjuvant setting, those are based—as much as possible&mdash;usually on randomized data.

In terms of the latest updates, I think probably the most impactful one is the importance of at least considering genetic testing [in] all patients.

In the past, we used to be a little bit selective in whom we would recommend that for, but now it’s almost a universal recommendation that we at least consider doing genetic testing. By that I mean, even if someone doesn’t have a provocative family history of cancer, we should think about doing genetic testing on those individuals to see if they have any hereditary susceptibility genes.

The classic one would be someone [who] has a germline BRCA, either BRCA1 or especially BRCA2, mutation because not only does that have particular implications for screening family members, but now we know that it actually has very substantive therapeutic implications for the patients themselves, with the use of PARP inhibitors and a greater sensitivity to platinum agents, for example.

I think that’s a very important piece that perhaps goes underrecognized still in the community, and that’s a little different from just tumor-based molecular testing, which also, actually we believe, should be done or at least be thought of on a more consistent basis. And that’s basically looking at any mutations or genetic alterations within the tumor itself, so sematic mutations or genetic changes, because what I usually tell patients is any information is good to have. It’s not always actionable, but if we happen to find the patient who has evidence of microsatellite instability, or an NTRK fusion, well we have very specific treatments for those situations, and we have clinical trials available sometimes for patients with other mutations [who] are selected for those specific mutations. So I think doing that as much as possible, doing that kind of molecular profiling, is also something that should be considered routinely.

Despite there being a growing number of therapeutic options for pancreatic cancer, a recent study found one-third of these patients don’t see a medical oncologist and more don’t receive treatment. Why do you think that’s the case? Can anything be done to improve those numbers?

I think pancreas cancer, because it’s historically been felt to be a pretty dismal disease in terms of prognosis and patients faring poorly, I think there’s perhaps been a sometimes-nihilistic philosophy that some providers even still have despite our growing array of options for patients. So, I think part of it is that education piece for providers, but also for patients and families themselves. I think aggressive symptom management—because sometimes when a patient presents, the thought is, “Well, they’re not a candidate for treatment because they have such severe pain or because they’re losing so much weight”&mdash;if we can aggressively manage those cancer-related symptoms, it may afford the opportunity to at least offer them some treatments. We recognize that our current treatments may help some individuals a lot, some maybe just a little, and some not at all, but I think just giving them that opportunity, if they’re well enough, to even try…I always want that option to be available to patients, and I think that’s perhaps one of the main challenges 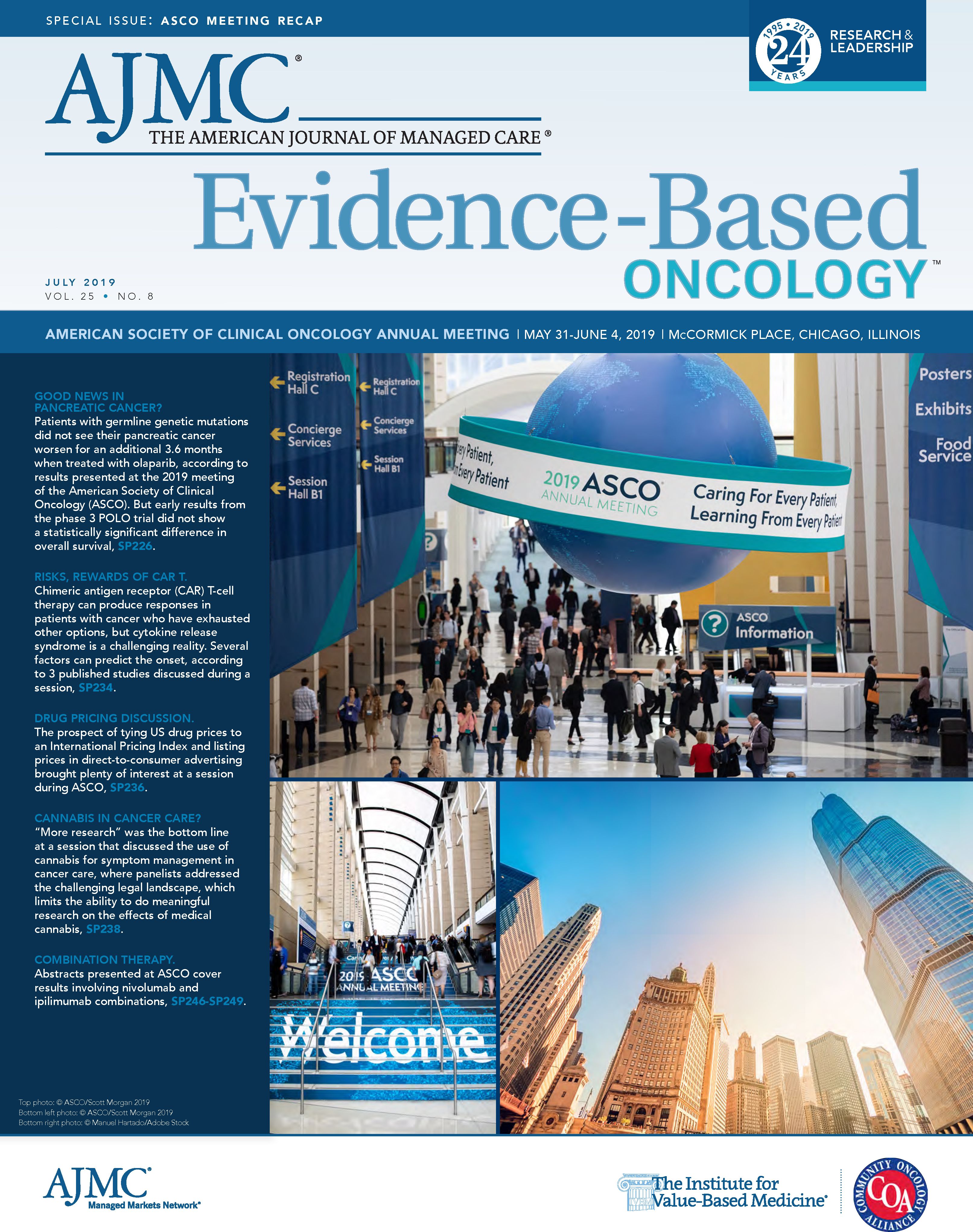