CMS just released 2016 data on the Medicare Shared Savings Program and the information proves that patience pays off, savings don't have to happen at the expense of quality, and that physician-led accountable care organizations are more successful.

This post was co-written by Farzad Mostashari, MD, founder of Aledade (headshot) 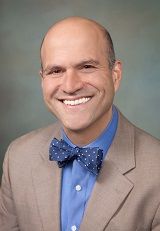 On Friday, CMS released a treasure trove of data on the Medicare Shared Savings Program (MSSP).

Before we dive into the results, it must be noted that CMS has once again provided transparency into the MSSP unmatched by any other value-driven program. This transparency simplifies the administrative burden of participating in the program and allows the private sector to make informed choices on how and where to invest in accountable care. Another necessary caveat is that these reported results are for performance against a benchmark, which is most likely not the best estimate of the true effect of accountable care organizations (ACOs) on costs within local markets, and underestimates the impact nationally.

We at Aledade believe that there is still great opportunity to improve the MSSP through better counterfactual benchmarks that account for local factors and offer the right form of risk for ACOs.

With those notes out of the way, we can explore the 2016 results in the context of the current MSSP rules.

The most important finding in the results is a familiar one: population health driven savings take time. Only a few interventions generate savings right away. Today is October 31, if a diabetic patient starts a weight loss program today with his or her doctor and care manager, it is highly unlikely that will generate savings in 2017.

The 100 “Freshman” ACOs that started in 2016 in aggregate had spending only $5 million below their benchmark and only 18% earned savings; the 85 Sophomores saved $50 million; the 100 Juniors saved $93 million; the 74 Seniors that started in 2013 saved Medicare $204 million. The 73 most experienced ACOs’ savings are now up to nearly $300 million a year. Among the Seniors and Graduates (which include many in 2-sided risk models), Medicare costs were $503 million lower than the benchmark and the ACOs received $357 million in shared savings payments, meaning CMS comes out $145 million ahead (not including an additional $6 million in payments to CMS for losses from 2-sided ACOs). 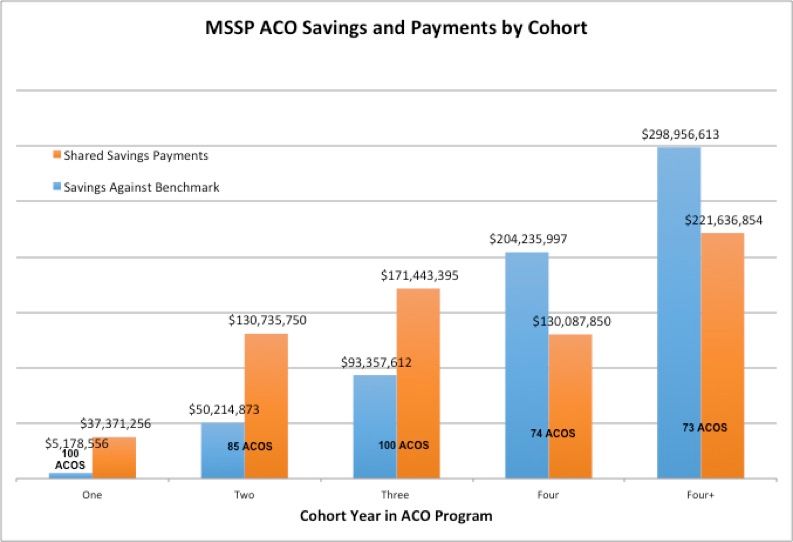 In addition to the realities of the timelines for savings from prevention, care management, and other interventions, ACOs that succeed in implementation are the ones that last in the program. Of the 106 ACOs that started in the MSSP in 2013, now only 74 remain. This is an expected outcome and a good one. Moving from fee-for-service (FFS) to value also involves moving into a more competitive environment. ACO work is hard. It competes with other priorities. Not every ACO is going to succeed in implementing interventions that will make a difference over the long run. A certain amount of creative destruction is necessary in this new, competitive value-driven healthcare world.

Those early ACOs that are making progress on cost and utilization should keep the faith. ACOs that are not making progress should make way for new entrants and fresh ideas. From a CMS perspective, having a few years of 1-sided risk provides a necessary “safe zone” needed to encourage participation in alternative payment models, but as ACOs mature, they should be expected to move to 2-sided risk or exit the program.

For the movement from volume to value, patience is required.

Savings do not come at the expense of quality

Besides the benefits of playing the long game, what else does the data tell us? ACOs do very well on quality.

CMS has stated in the past that for measures that exist in both ACOs and FFS, ACOs consistently perform better. In every start year of the ACO program, those ACOs receiving savings did better on quality than those that did not. There is a lot more to being a successful ACO than just doing well on quality scores, but this data should provide reassurance to policy makers and the public that it is possible to achieve both better care and lower cost.

CMS launched a new initiative called Meaningful Measures to work on developing and refining measurement. Over time, we would expect meaningful measures aligned with outcomes to correlate more strongly with the achievement of savings.

The term ACO is very broad. The majority of ACOs include a hospital. Others are based around community health centers. A few are based on post-acute care settings. But the majority are the 226 ACOs with a hospital and the 134 ACOs with physicians only.

Nearly half (45%) of physician-only ACOs earned shared savings, while only 23% of ACOs that include a hospital earned shared savings. Even more telling is when you look at how those percentages compare to those ACOs that would have had to pay back losses had they been at risk. Only 13% of physician-only ACOs would have had to pay back CMS a ratio of more than 3:1. However, for every hospital ACO that exceeded the statistical threshold for savings, another hospital ACO had statistically higher costs.

From a policy perspective, CMS should be looking for opportunities to support greater participation by independent physicians in the ACO program. The Advanced Payment and Investment Models have been effective at supporting the start-up costs for physician-only ACOs and those in rural areas. Calibrating downside risk to the revenue of ACO participants (as in Center for Medicare & Medicaid Innovation's Track 1+ program) is critical to these ACOs advancing to 2-sided risk and should become part of the permanent MSSP program.

Another factor that suppresses the savings against benchmark for ACOs is the artificial capping of risk adjustment, which is unlike any other commercial or Medicare Advantage total cost of care risk arrangement. The risk scores for ACOs’ continuously enrolled populations did, in fact, go up for 49% of ACOs; however, due to regulation the benchmark did not go up. So, 51% of ACOs had their risk score go down and in this case the benchmark was lowered. This one-way movement suppresses the savings performance of ACOs when measured against benchmark. It also introduces significant uncertainty regarding whether ACOs efforts will go unrewarded due to shifts in patient population (eg, conducting greater outreach to sicker populations). Not recognizing actual changes in the morbidity of a population suppresses the actual savings ACO achieve.

The most obvious lesson of 2016 is that patience is rewarded. Over time, population health initiatives pay off, and ACOs that cannot figure out implementation dropout freeing up their physicians to join other ACOs that can. MSSP administrative implementation itself has been a success story. CMS has been willing to learn from ACOs' experiences, to learn from the data, and to refine the program. That opportunity for improvement is as stark today as it has ever been. CMS has opportunities to make it easier for ACOs to weather the early years through more accurate benchmark methodologies that reflect changes in local healthcare markets and changes in the risk of populations. CMS also can match the right risk profile for different types of ACOs across all tracks.

Researchers have found that when Medicare beneficiaries in ACOs are compared to those that do not benefit from ACOs receive even more value than comparison against the MSSP benchmark shows. These benefits spread out across Medicare and indeed the health care industry. Lower FFS costs lead to lower Medicare Advantage rates which pushes Medicare Advantage plans to also embrace accountable care. Physicians who make the commitment to accountable care want data on all their patients so they seek out value-based contracts with their commercial payers and with Medicaid. Better benchmarks, better risk adjustment, and better 2-sized risk will move ACOs to 2-sided risk, advanced alternative payment models faster. The ACOs in turn will generate more savings for CMS and greater savings for across health care created more value for patients.

Pharmaceutical companies will not refund prepayments made by global organization Gavi for COVID-19 vaccines it no longer needs; following the countrywide baby formula shortage of 2022, the FDA looks to consolidate food division leadership; a province in Canada starts a 3-year drug decriminalization program to try to reduce drug overdose deaths.