As a new administration finds its footing, cancer care stakeholders are raising questions about the fate of many federal policies that will make an impact on health care as well as on oncologists, payers, and patients. Kavita Patel, MD, MS, FACP, a non-resident fellow at the Brookings Institution Center for Health Policy, addressed several of those policies to kick off the Association of Community Cancer Centers (ACCC) 47th Annual Meeting and Cancer Center Business Summit.

Patel, who served as a director of policy for the White House under President Barack Obama, gave a reminder that a decade later and during a global pandemic, the root issues in health care remain the same.

“All in all, no matter what, you can safely say that 10 years after the passage of the Affordable Care Act [ACA], we’re still faced squarely with the issues of cost, as well as quality, that we tried to address in 2010,” Patel said. She noted that with a US Supreme Court decision on the ACA’s validity expected in spring or summer 2021 following oral arguments in November 2020,1 her presentation was based on the assumption that the ACA will still stand.

Noting that both the House of Representatives and the Senate have very slim Democratic majorities, Patel pointed out that although executive orders have become common for presidents to enact change, some of the biggest health care policy reform changes will require legislative action.

External factors, particularly the coronavirus disease 2019 (COVID-19) pandemic, have been and will continue to shape the Biden administration’s health care priorities. In the short-term, increased awareness of inequity throughout the health care system is 1 pandemic-related priority that has translated to cancer care, another environment with long-documented disparities that have become the focus of recent initiatives.

“It’ll be interesting to see what the Biden administration wants to do in terms of most-favored nation [status] and some of the policies and rules that they put either on pause or asked the agencies to kind of rescind—but there will be action on drug prices. There’s no doubt in my mind,” Patel said. The most-favored nation rule, which the Trump administration issued 60 days before Biden took office, faced overwhelming blowback from community oncology advocates throughout the country, who raised concerns about its potential effects on community-based practices.3

Some of the major issues in access to care as the Biden administration tackles Trump administration changes include strengthening and expanding the ACA; strengthening Medicaid coverage, which saw new parameters such as work requirement waivers; and improving racial and gender health disparities, according to Patel.

She also hopes to see a rejuvenation of the debate surrounding the Medicare 340B Drug Pricing Program, which has faced bipartisan criticism and accusations of some facilities taking advantage of the program meant to provide drugs at a reduced cost in low-income communities.

“We saw some actions in the Trump administration that continued to…chip away at that disparity that people felt was there—that those who the program was intended for did not match who actually got it. I think that trend will continue, but it’s going to have a lot more to do with whether, once we’re past COVID-19, the White House puts attention to it or whether it comes from a very kind of aggressive administrator in the form of a [Health Resources and Services Administration] administrator.”

Price transparency, which the Trump administration pushed for, is something that the Biden administration has not indicated whether it will support or reject, according to Patel. Price transparency as it has begun to be implemented in some hospitals, where patients can see prices online ahead of scheduling services, is not working as intended, she added.

“It never really works out that way. It’s hard, and we found from a decade-plus of literature that consumers don’t really shop outside of a couple of elective procedures—colonoscopies, knee replacements, radiology, imaging, etc—but it can be hard,” she said. “So, it’ll be interesting to see how Biden takes what I think are clear signs to providers, primarily hospitals, and payers, to make ‘cost transparent.’ But in my opinion, what we see today is not going to make a meaningful change unless there’s something built on top of it.”

Once issues of cost and care access are addressed, Patel said, then comes an ever-present topic in discussions of cancer care: payment reform.

Value-based payment models are another trend in cancer care that Patel does not see slowing down. But she did not mince words in declaring the Oncology Care Model—the Center for Medicare & Medicaid Innovation’s (CMMI) episode-based, oncology-focused alternative payment model (APM) that began in 2014 and was extended through 2021 in light of the COVID-19 pandemic—a “debacle.”

“The data and the evaluations to date have been pretty disappointing and showing that despite helping with care coordination efforts, there was really no effect on cost. And I think it has a lot more to do with the flawed mechanism or the design of these models, to be perfectly blunt,” Patel said. “It’s hard enough for physicians to grasp everything in terms of genetic testing implications for treatment; and treatments, which are dose based and have various step-off points depending on adverse effects, etc.

How you put that into a value-based model that CMS can administer is nothing short of a debacle.” Despite its shortcomings, though, Patel added that she hopes it will not affect the ability to advance other value-based payment models.

Another APM facing criticism and delays due to the pandemic is the Radiation Oncology (RO) Model, which the American Society for Radiation Oncology (ASTRO) took aim at in a recent announcement of its support for President Biden’s CMS administrator nominee, Chiquita Brooks-LaSure, and his selection of Liz Fowler to direct CMMI.4

“We look forward to working with Ms Brooks-LaSure, Ms Fowler and the Biden administration on a variety of issues, including ways to fix the flawed RO Model and protect access to high quality radiation oncology care for people with cancer,” the organization said in the release. “President Biden is a recognized leader on ways to advance cancer care, and we hope to collaborate with his team to enhance quality and reduce costs for patients.”

Patel concluded her discussion by looking ahead at topics not necessarily addressed in the federal policies, highlighting the importance of awareness surrounding the immeasurable toll the pandemic has taken on oncology providers and patients alike.

“I do think advocacy around the toll it’s taking on providers as a very, very broad term—physicians, advanced practitioners, lay caregivers—has to be prioritized,” she said. “[It’s] not necessarily something that I’ve seen in some of these federal policies, but I think it has to be included; and advocacy for the kinds of programs for our patient community that has also been just as devastated.” 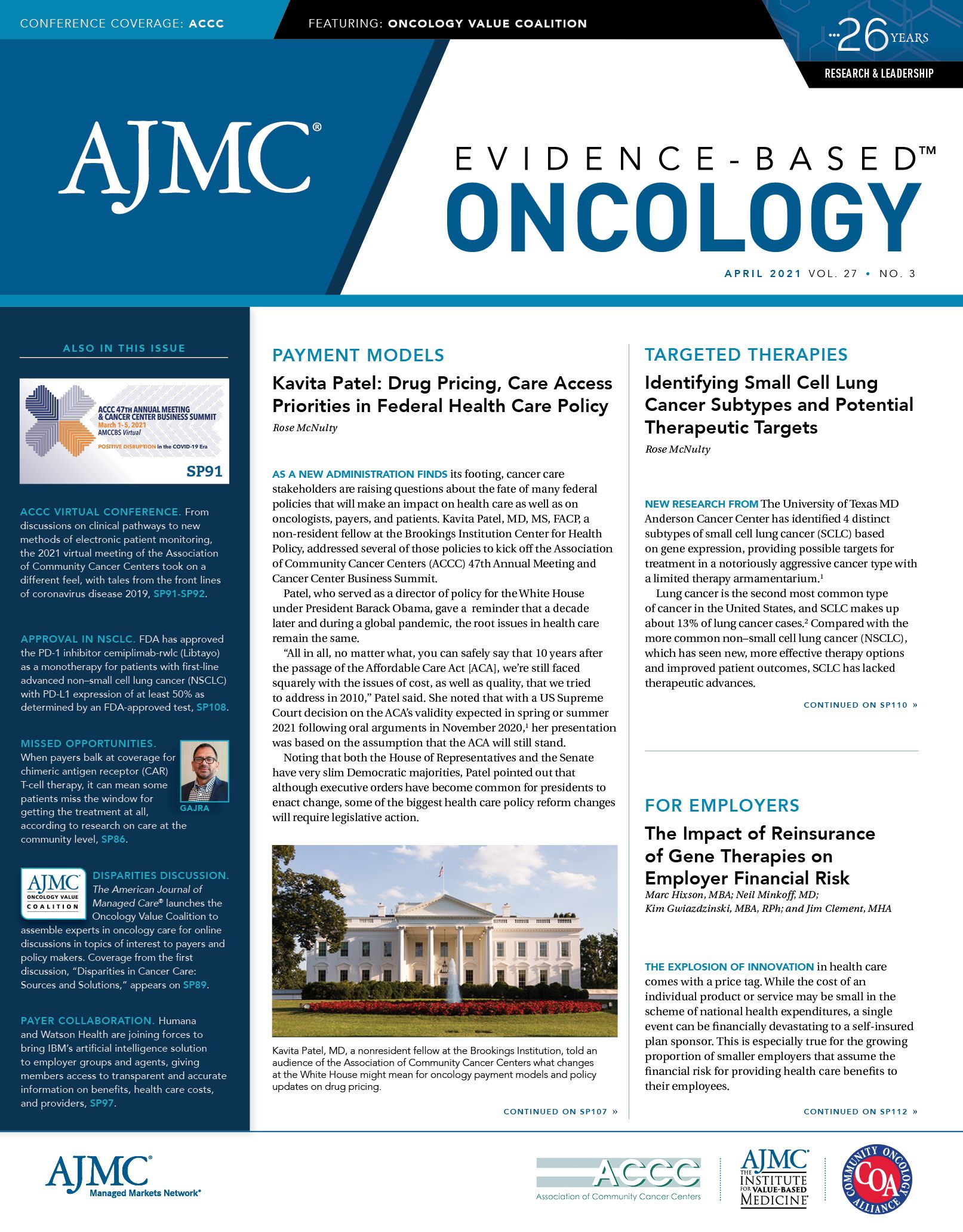