Ipililumumab's role in treating melanoma will change, as the immunotherapy will likely become part of different combinations than we see today.

It has been more than 4 years since The American Journal of Managed Care® first spoke with Jeffrey S. Weber, MD, PhD, about immunotherapy and specifically about ipilimumab (Yervoy, Bristol-Myers Squibb [BMS]).1,2 At the time, oncologists were still gaining an understanding of this class of cancer treatment, which activates the body’s own immune system by flipping the switches—or checkpoints&mdash;that regulate how the body attacks foreign cells and leaves healthy ones alone. Payers were coming to grips with the price: The drug cost $120,000 a year, an amount that would be eclipsed by combination therapy.3

Ipilimumab did not work for everyone. But when it did, patients with the deadliest form of skin cancer—who would have survived just months on chemotherapy&mdash;now survived years. A 2013 article Weber coauthored found survival rates of 37.7% to 49.5% at the 4-year mark for treatment-naive patients in phase 2 trials.4

Much has changed since then, both for immunotherapy and for Weber, who has been a leader in bringing basic research into clinical practice for more than 20 years. In November 2015, he left the H. Lee Moffitt Cancer Center & Research Institute in Tampa, Florida, to become deputy director of the Laura and Isaac Perlmutter Cancer Center at New York University Langone Medical Center.5 As Weber points out, today there are more checkpoint inhibitors—including nivolumab (Opdivo, BMS)6 and pembrolizumab (Keytruda, Merck)7— approved for many more cancers, such as non—small cell lung cancer, renal cell cancer, head-and-neck cancers, Hodgkin lymphoma, and colon cancer.8 In the case of ipilimumab, the target is cytotoxic T-lymphocyte antigen-4. Both nivolumab and pembrolizumab target the programmed cell death 1 (PD-1) protein.

In a new interview with Evidence-Based OncologyTM, Weber discussed developments in the past year that are rapidly changing immuno-oncology treatment approaches in melanoma. Ipilimumab’s place in the melanoma armamentarium is shifting, thanks in part to research Weber presented in the past year but also because of new combinations in the pipeline. Ipilimumab will still be used, he said, but it will likely be used in new and different ways. And new cost issues are on the horizon, as the prospect of triple therapy is no longer something of the imagination.

Not long after the interview, on December 20, 2017, the FDA approved the use of nivolumab for adjuvant treatment of melanoma,9 on the heels of Weber’s presentation of results of the CHECKMATE 238 study at the European Society for Medical Oncology (ESMO). The study found that at 18 months, the difference in relapse-free survival was 66% for those taking nivolumab compared with 53% for ipilimumab, with far fewer immune-related adverse events (AEs) for those taking nivolumab.10 Also in December, Weber was senior author for a study in Cancer Immunology Research showing that a test based on a protein signature associated with metastatic melanoma outcomes can predict patient survival and help oncologists decide which PD-1— blocking antibodies are appropriate for which patients.11 The findings support Weber’s discussion of the growing importance of biomarkers in steering very expensive therapies to patients who will respond to them and for figuring out in advance which patients won’t respond.

Weber and others see a big change ahead: Investigators at ESMO presented results for a combination of pembrolizumab and epacadostat (Incyte), an inhibitor of the enzyme indoleamine 2,3-dioxygenase-1, or IDO1. The overall response rate of 56% and median progression-free survival (PFS) of 12.4 months in the phase 1/2 trial,12 combined with AE rates that are better than the ipilimumab—nivolumab combination, suggest to Weber that a changing of the guard could be on the way in advanced melanoma.

“Based on all the phase 1/2 data, it looks pretty promising,” Weber said. “I would predict if pembro—epacadostat has anywhere near a 12-month PFS and a 50-plus percent response rate, I think people will embrace it,” noting that the ipilimumab–nivolumab combination will become second-line treatment. (Indeed, reports of the early pembrolizumab–epacadostat results have fueled speculation about the future of the Bristol-Myers Squibb [BMS] combination but also about epacadostat and nivolumab.13,14)

“You’ll need to look for new [ipilimumab] combinations. Ipilimumab has been kind of ignored in terms of drug development in the last 5 years. But now, all of a sudden [ipilimumab] becomes an important second-line treatment,” Weber said. He rattled off a list of potential combinations: ipilimumab—epacadostat, ipilimumab plus talimogene laherparepvec, or T-VEC; ipilimumab and anti-lymphocyte activation gene-3, known as LAG-3.

“We’ll need to look for all these other combinations,” Weber said. “But it will be good for patients, because if the pembroepacadostat trial pans out, it will become adopted. I’m sure that’s the way it will go in the community.”

AEs and a "Provocative Question"

The prospect of an alternative to ipilimumab—nivolumab has attracted widespread attention in part because so many patients suffer reactions. “The initial [ipilimumab–nivolumab] combo was, and is, pretty darn toxic,” Weber said. “Whether you give, [the drugs] consecutively—one after the other as we did in a prior study&mdash;or concurrently, you have a 50% to 60% rate of immune- related adverse events. That’s pretty serious.”

And yet, Weber said, there’s been “surprisingly little” research on the etiology and prediction of immune-related AEs over the past decade. But this could be changing. In 2017, Weber noted, the National Cancer Institute (NCI) included an item on this very issue in its Provocative Questions, which are items that investigators are asked to address in grant requests. Precisely, the question is:

“What are the predictive biomarkers for the onset of immune-related adverse events associated with checkpoint inhibition, and are they related to markers for efficacy?”15

“I think people are becoming more aware of the issues surrounding immune-related adverse events,” Weber said. “There’s a huge gap in education in how to manage them.” He described a patient he had recently seen who had gone 2 weeks with undiagnosed hypophysitis, an inflammation of the pituitary gland that is a known AE for patients being treated with ipilimumab. The patient’s oncologist had missed it.

As checkpoint inhibitors become approved for other cancer indications, this will become a bigger issue, Weber said. “You’re going to see a lot of approvals coming through in the next couple of years. More and more doctors will be using these drugs in the community. So there will be a big need for education.

“It’s a 2-part process: People will become more experienced; with experience comes some level of expertise. But if your average community physician is treating just a handful [of these] patients a year, experience isn’t going to help that much,” Weber said. “It’s going to take education.”

When Can Patients Stop Immunotherapy?

“That’s an open question, which will be difficult to answer,” Weber said. As patients live longer, however, the question of how long patients should stay on immunotherapy will come up more frequently. The answer isn’t obvious, he said, because it’s not the type of question investigators with funding from the NCI have typically studied— but it’s nonetheless an important one. Weber cited an abstract presented at the annual American Society of Clinical Oncology meeting in 2016 by Caroline Robert, MD, PhD, that found that patients in the KEYNOTE-001 trial who stopped pembrolizumab because of toxicity continued to receive treatment benefits.16

“That, I think, will convince people that they should feel comfortable taking patients off [therapy], either after a year or 2 years. Certainly, I think patients will come off by 2 years,” Weber said, although he acknowledged it’s not an easy call. “I tell people if they’ve been on a year and they’ve had a response and the response is stabilized, they should feel comfortable coming off. Now, that’s a tough sales pitch. Imagine you’re the patient and I’m telling you it’s OK to come off a therapy when you’ve had a great response. People get a little concerned about it.”

Considering the chronic AEs, Weber would advise his melanoma patients to stay on immunotherapy “not less than 1 year, not more than 2 years.”

CAR T-cell therapy in solid tumors has been “a huge disappointment,” Weber said, but that starts with the mechanism: “You need a cell surface molecule,” he said. “The CAR T is a fusion of the antigen recognizing region of the antibody with the T-cell transduction molecule. Other than the hematologic malignancies, there aren’t too many dispensable molecules that are present on cells that you can use as a target. In other words, you have too many off- target side effects when you have solid tumors doing CAR strategies.”

Weber noted a promising strategy involving a folate receptor with ovarian cancer,17 “but apart from that, I think it’s going to be a very difficult scenario.”

Weber said his patients at Langone have not had problems gaining coverage for immunotherapy. Not only is the system smooth at his institution, but there are differences from region to region with Medicare—and he finds things better in New York than he did in Florida. “With recent therapies, there have not been any issues at all,” he said. “One nice thing is the big companies like Merck and BMS have tended to have patient assistance programs,” so even though he just presented data on adjuvant nivolumab last fall, “if you can’t get insurance [coverage], you can get it through patient assistance. So I think that’s a good thing.”

Still, the prospect of triple combination therapy concerns him. “Now, we’re talking the kind of money that we were talking about for CAR T cells. And that really flipped everybody out,” he said. The announced price of the first CAR T-cell therapy, tisagenlecleucel (Kymriah, Novartis), was $475,000, although Weber noted reports that Novartis was negotiating an outcomes-based agreement with the CMS that would call for Medicaid to pay only if the treatment worked.18

As immunotherapy moves into the adjuvant population, the math becomes more challenging for payers and institutions if “the best you can do is treat 2 patients to benefit 1,” Weber said. That’s why the development of better biomarkers becomes so important. “You’d rather know who are the patients who are going to be cured” and which ones won’t. Thus, targeting the right patients to treat is a huge research focus right now, he said.

“This is the story of where we’re heading,” Weber said. Without better biomarkers, “even if you have the perfect therapy, you’re still going to be treating twice as many patients as you need to.” 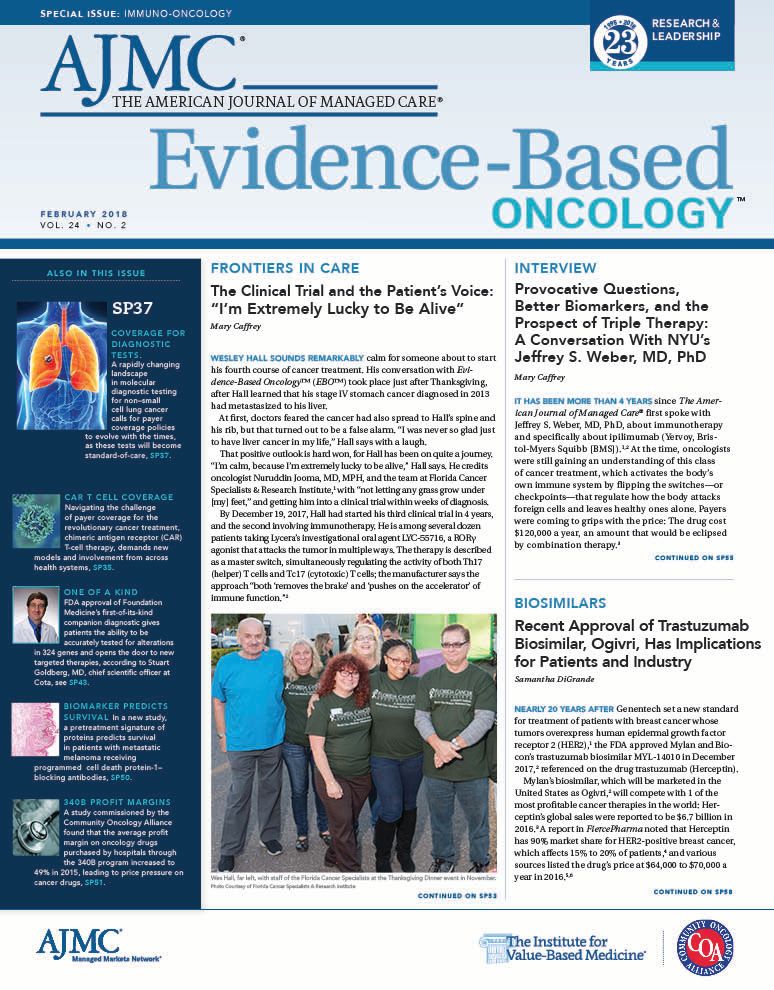