Speakers at the September 12, 2019, Policy Summit of the National Comprehensive Cancer Center, held in Washington, DC, addressed what practices have learned from experience with the Oncology Care Model and what steps must occur to standardize patient reported outcomes to incorporate them into reporting.

Lessons From the Field: How Practices Are Succeeding Under OCM

Three years into CMS' Oncology Care Model (OCM), with feedback from 4 performance periods, practices participating in the value-based model continue to strive for successful practice transformation that drives appropriate utilization and contains costs while keeping patients and oncologists at the forefront. However, as drug costs take up an ever-growing share of the total cost of care, practices find themselves in control of a smaller portion of costs, according to speakers from an academic medical center and a community-based practice who took part in the National Comprehensive Cancer Network (NCCN) Policy Summit held September 12 in Washington, DC.

In the last decade, there has been a more than 5-fold increase in incremental anticancer drug costs: Average annual costs rose from $30,000 in 2006 to $161,000 in 2015. There has not been a corresponding increase in practice efficacy, according to scores from both the American Society of Clinical Oncology and the European Society for Medical Oncology,1 explained Kerin Adelson, MD, associate professor, chief quality officer, and deputy chief medical officer for Smilow Cancer Hospital at Yale New Haven/Yale Cancer Center.

Despite the challenge, approximately one-third of practices have been able to lower their total costs and achieve savings under the OCM.2 Adelson and Diana Verrilli, MS, senior vice president of strategy and practice solutions at McKesson Specialty Health, which is part of The US Oncology Network, shared their experiences with the model and what they’ve learned since they entered.

Addressing What You Can

Comparing costs of care from 2012 through 2015, before the OCM was implemented, with performance periods 1 through 3, the overall cost of care increased from $28,000 to more than $32,000 for Smilow Cancer Hospital; however, this was less than what CMS expected, so the network was able to achieve savings. To date, it has received over $6 million in performance-based payments. Looking within the total cost of care, spending significantly increased for drugs, which accounted for 53% of costs between 2012 and 2015 and jumped to 60% in performance period 3.

However, by focusing on the remaining 40% of other healthcare costs, Smilow Cancer Hospital was able to exert tighter control. The hospital did this by honing in on utilization patterns, specifically in the emergency department, with inpatient care, and in postacute care. Through a new revenue stream under the OCM, Smilow Cancer Hospital implemented infrastructure focused on those areas by building a care management program, increasing access to palliative care, and opening an urgent care center.

The US Oncology Network has also seen success with the model. With 15 practices participating in the OCM, 14 fell below the benchmark during performance period 4; only 5 practices received performance-based payments. Together, the practices achieved $36 million in Medicare savings, totaling $89 million in savings over a 2-year period, explained Verrilli.

Although most of the network’s efforts focused on reducing utilization, practices were able to target certain areas where they noticed large variation in utilization, including supportive care drugs. Looking at pegfilgrastim, for example, the group implemented appropriate use policies, which yielded positive results and brought the practices closer in line to, even below, other OCM practices’ utilization rates.

“Never underestimate how long it takes to change physician behavior and maintain that level of change,” said Verrilli. It’s one thing to build supports around oncologists; it’s much harder to change the way doctors practice, added Adelson. “There’s a black box around what goes on between a doctor and a patient in an exam room,” she said.

Smilow Cancer Hospital tried to uncover how its doctors were practicing things like goals-of-care discussions, which drive earlier use of hospice; communication skills; and patterns of practice. The most important piece to driving new behaviors, and reinforcing good ones, is through data, said Adelson. Working with Flatiron, Smilow Cancer Hospital implemented an end-of-life dashboard that every 4 months sends doctors data that reflect their care practices for their patients who died.

Within the data is what percentage of those patients got cytotoxic chemotherapy, oral therapy, and immunotherapy. The doctors are also able to see their cost measures, including where they landed compared with other doctors, as a whole, by cancer type, and by drug use.

“We can then get a conversation going about which drugs to use, and when, in order to drive more appropriate behavior,” said Adelson, who emphasized the importance of drilling down to the patient level and providing doctors with individual anecdotes. Verrilli echoed Adelson, saying, “Starting the OCM has led to a significant paradigm shift in how care is provided.” She explained that her group also emphasized sharing data with its doctors each quarter and giving them goals of where utilization rates should be. Behavior change also came from embracing clinical pathways at the point of care through a partnership with NCCN. For example, several oncologists in the network rarely see patients with pancreatic cancer, she said. By using value pathways implemented through the partnership, when an oncologist sees one of these patients, they’re equipped with the tools needed to treat them.

Recognizing the Challenges and Pain Points

Despite its success, the OCM does present challenges for the 2 networks. In addition to the high cost of drugs, the networks also face these challenges:

• Identifying and enrolling patients, especially those on oral drugs

• Entering all facts for quality measures into the electronic medical record

• Ensuring clear definitions for new roles, such as patient navigators.

Defining, Standardizing, and Acting on Patient-Reported Outcomes in Cancer Care

During a panel discussion on defining, standardizing, and reporting quality in cancer care during a National Comprehensive Cancer Network Policy Summit, held September 12, 2019, in Washington, DC, it became clear that stakeholders of all backgrounds have set a focus on a single type of metric in particular: patient-reported outcomes (PROs).

However, although all stakeholders can agree that capturing and acting on these measures is important, bringing the concept to life has proved much more difficult. Lawrence N. Shulman, MD, FACP, FASCO, deputy director for clinical services, Abramson Cancer Center at the University of Pennsylvania, called it a “huge deficiency” in the healthcare system. “I spend a lot of time looking at the National Cancer Database, and I have a huge amount of survival data—our ultimate outcome data&mdash;but currently, none of that is linked to PROs,” Shulman said. “We know that patient got treatment A or that patient got treatment B and they lived each 12 months; we don’t know anything about the quality of their life during that period of time.”

“As a nation, we need to get there,” he said, warning that it will take a fair amount of work. According to Shulman, the change is more heavily concentrated on the process side of things rather than the cost.

“I think the cost is acceptable, but clinics are all working 110%, and it’s just one more thing to do,” he explained, but added that it can be done.

The Penn Medicine oncology team now measures PROs at every visit for patients with cancer, with a capture rate of more than 90%. The feedback gets inputted into the electronic health record in a structured format for providers to see at the time of the patient visit and to compare the measures with the treatment and outcomes of those patients.

The team is now starting to differentiate the questionnaires that patients answer, which means customized reports for different disease types, where the patients are within the care continuum, and so on.

In the long run, Shulman hopes to see this be replicated across the country and for practices to be able to link PROs with a large data set like the National Cancer Database or Medicare Surveillance, Epidemiology, and End Results database. Bryan Loy, MD, MBA, corporate medical director of Humana’s Oncology, Laboratory, and Personalized Medicine Strategies Group, agreed that the country is still in the early days of incorporating PROs into actionable information. Currently, Humana collects information on the patient experience through clinical programs or through complaints relating to member experience. However, he noted, the insurer is still on the front end of this. Representing CMS, Reena Duseja, MD, MS, who serves as the chief medical officer of Quality Measurement and Value-based Incentives Group, reflected on the agency’s “Meaningful Measures” framework that it launched 2 years ago to make sense of the measures used in federal programs.

“As we were developing this program, one of the areas that we recognize and that we have gaps in, is PROs, and since then, there’s been more emphasis in the agency on collecting outcome measures,” said Duseja. She explained that, looking at the proposed measures on the consideration list for the agency’s programs, there has been a bigger presence of outcomes measures. Of these measures, a subset are PROs.

Duseja also highlighted an important challenge that makes it difficult to transform the healthcare system into one that fully incorporates and acts on PROs: the need for standardization. Ronald S. Walters, MD, MBA, MHA, MS, Department of Breast Medical Oncology, Division of Cancer Medicine at The University of Texas MD Anderson Cancer Center, agreed, noting that PROs are collected from nearly every patient participating in a study and are beginning to be collected on patients in the clinic; however, it is not done in an organized fashion.

Walters elaborated more on the issue, explaining that although there are universal measures that apply to all patients, such as being able to work if they choose and their overall quality of life, there are also more specialized ones that vary based on the disease type, the stage of cancer, and what matters to different demographics of patients. These latter measures, he explained, are the more controversial ones.

Instead, he said, there should be a program where there is a mix of measures that include both universal measures and more specialized measures and in which providers can mix and match. Duseja agreed, emphasizing that there needs to be flexibility and choice to allow providers to choose the measures that matter to them and their patients. Nevertheless, there still is a need for standardization for there to be comparison across providers, and there is still the question of how to collect these PROs in a way that addresses this challenge, she said. 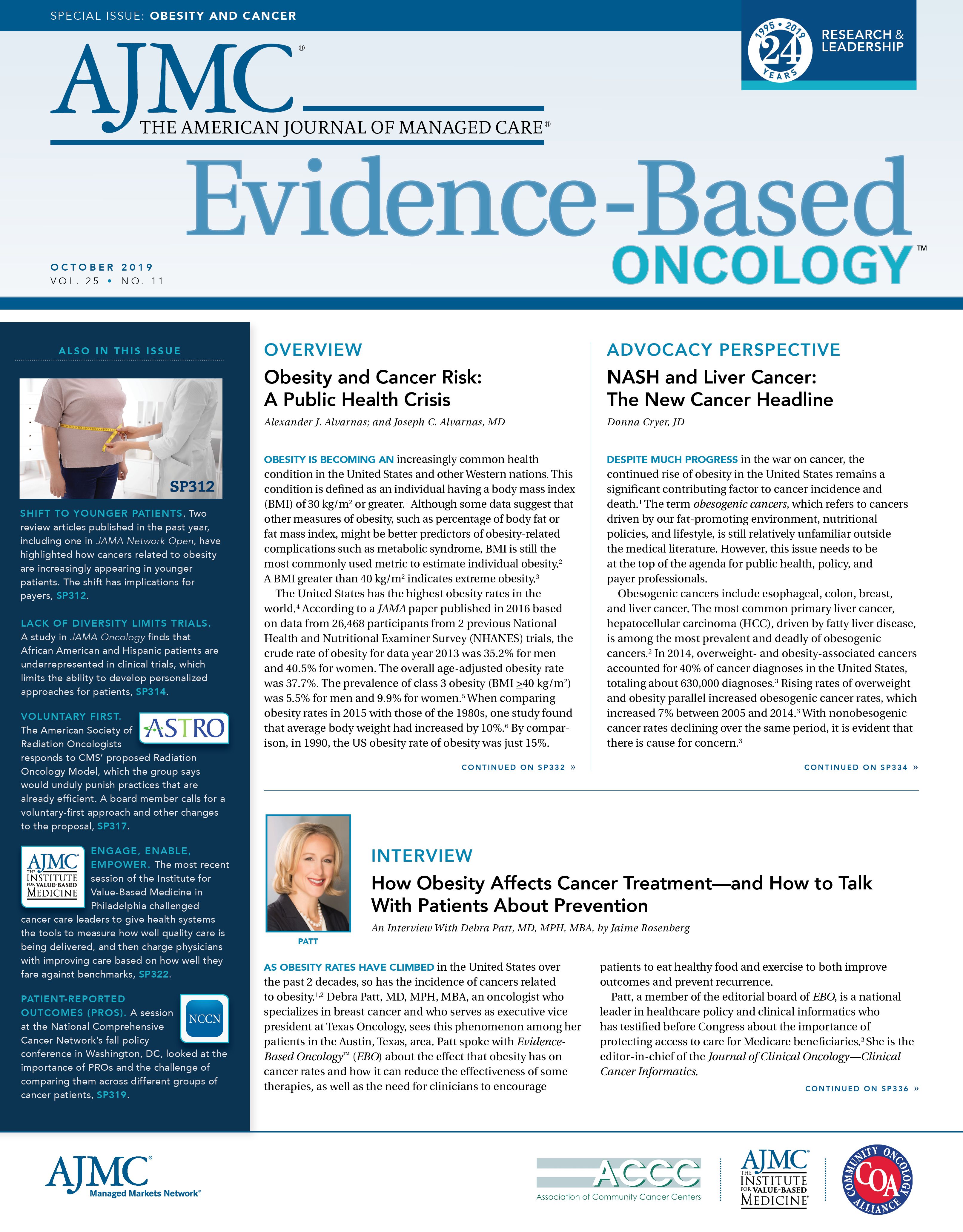