Why "tech-enabled" solutions make sense and how the Music City became the a health care hub.

Data-driven health care companies such as Thyme Care, Aspire Health, and Monogram Health don’t just magically grow: All required investment from those who understood the companies’ potential in their early stages. That piece of Nashville’s rise—as a place both home to and a magnet for health care venture capital (VC)—was the closing chapter of the April 21 meeting of the Institute of Value-Based Medicine®.

The panelists arrived in the VC arena via different paths, but they share an interest in the “tech-enabled” solutions that aim to squeeze inefficiencies from health care delivery. The focus today, unlike in prior waves of investment, is on better health care delivery, not just short-term savings.

Fargnoli, for example, described his interest in investing in Nashville-based Thyme Care with former colleagues from Flatiron Health. Thyme Care, which seeks to scale successful models of cancer care navigation, could address the experience of Fargnoli’s colleague, whose mother is being treated for cancer in Boston. The mother, who is a Harvard professor, “described the experience as being alone in a small boat being bounced around by stormy waves,” Fargnoli said. “If she’s flailing, then nearly everyone else in the country is going to be doing worse.”

As much money as venture capital investors have made in health care, Robbins said, “I feel like we are only starting to get into the core of health care delivery.” Only a few enterprises, he noted, are touching the parts of health care “that a large number of people are experiencing.”

Robbins pointed to a company called Headway, which helps connect people with mental health providers with open appointments—eliminating the need for each patient to call dozens of providers to find an opening. Some models call for technology or software to be given to providers for free; payers then create the revenue stream to tap into a built network of precredentialed clinicians.

Schleicher invited each panelist to share success stories—and stories of the ones that got away. In the world of VC, however, each fund be must selective, so there will always be tales of investments not made.

Booker noted that Frist Cressey provided investment in OneOncology, which was started by leaders of Tennessee Oncology and West Cancer Center to build a platform for oncology practices to share data, clinical pathways, clinical trial opportunities, and best practices while maintaining independence. “Today, it’s one of the largest groups in the country,” Booker said.

Value-based care. Although the models need work, the panelists agreed that the broad principles of value-based care are here to stay. Some panelists said the challenge with the term is that when each stakeholder—whether it’s a payer or provider—views the concept through a different lens, not everyone has the same expectation.

“Clearly, health care is expensive and cost reductions need to happen,” Robbins said. “But the thing that is exciting about value-based care is the other part, which is this quality piece.” He would rather see the focus on efficiency begin from the patient’s perspective, and if “we can align things to reduce cost, that’s great.”

Nashville’s emergence. For Booker, Nashville’s rise as a center for health care innovation has a simple explanation: The talent is here. Early on, the city became home to Hospital Corporation of America, founded in 1968 by the Frist family. As Booker described it, the health care infrastructure in the city was built on “the legacy hospital model,” and when industry consolidation occurred, there was already a critical mass of people with knowledge and dedication to improving health care. Schleicher asked if other health care ventures relocating to Nashville had contributed to momentum.

“Absolutely,” Booker confirmed. “The biggest minds are saying, ‘Hey, this is where we want to be.’” 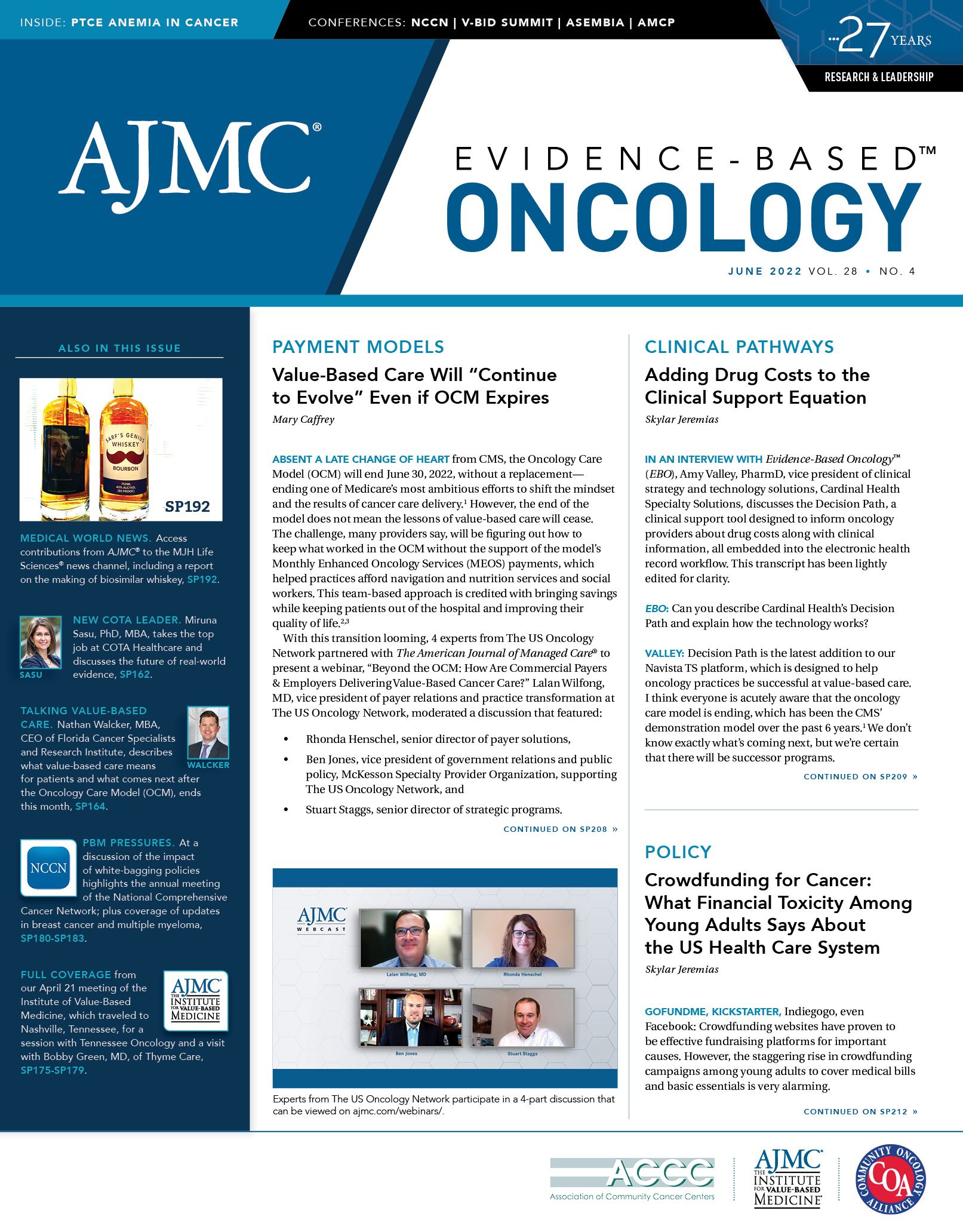 Pulling a Rabbit Out of the Hat
Health Care VC Leaders Talk Successes, Value-Based Care, and Nashville’s Rise
Thyme Care: A Human Touch in Cancer Care, Guided by Technology
Bringing Innovation to Value-Based Care at Scale, With an Assist From Technology
COTA’s Miruna Sasu on Real-world Evidence: “The Ecosystem Has Changed”
Florida Cancer Specialists’ Walcker: Taking a “Holistic” Approach to Value-Based Care
Adding Drug Costs to the Clinical Support Equation
Value-Based Care Will “Continue to Evolve” Even if OCM Expires
Crowdfunding for Cancer: What Financial Toxicity Among Young Adults Says About the US Health Care System
Related Videos
Related Content